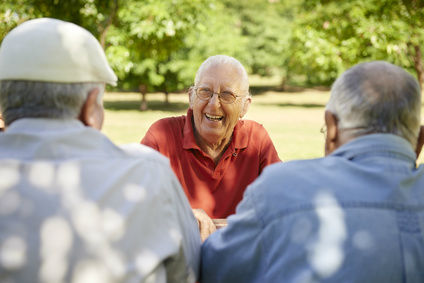 What do regions where a significant percentage of the people live past age 100 have in common? As it turns out, quite a bit. In September 2009, Dan Buettner gave a TED Talk in Saint Paul, Minnesota, focused on finding the answer to that very question. His presentation explored the habits of people living in ‘blue zones,’ areas of the world with the largest number of centenarians (people 100 years old or older).

The worldwide winners were Okinawa, Japan, and Sardinia, an island off of the coast of Italy. In the United States, the winning area was Loma Linda, California.

The Japanese island of Okinawa enjoys the highest rate of longevity in the world. Its residents also live the longest disability-free lives of any other region. In his talk, Mr. Buettner explored several aspects of the Okinawan way of life, including a plant-based diet and a cultural strategy to prevent overeating. The rule of thumb they follow is based on a philosophy by Confucius, which consists of stopping eating when your stomach is 80 percent full.

According to Dr. Craig Willcox, the author of The Okinawa Program, “the Okinawans have a low risk of arteriosclerosis and stomach cancer, a very low risk of hormone-dependent cancers, such as breast and prostate cancer.

They eat three servings of fish a week, on average… plenty of whole grains, vegetables and fermented soy products too, along with more konbu seaweed than anyone else in the world, as well as squid and octopus, which are rich in taurine – that could lower cholesterol and blood pressure.”

Wait – you say – hasn’t soy been found to have some extremely negative health consequences? The difference between the soy many Americans consume and the soy consumed in Okinawa is that in Okinawa, the soy that is eaten is fermented, such as in the form of fermented bean curd.

Dr. Willcox also points to certain vegetables indigenous to Okinawa that provide significant boons to the nutrition of its meals. These include goya, bitter cucumbers that have been linked to lowering blood sugar levels, and purple sweet potatoes, which are high in lycopene, carotenoid and flavonoid antioxidants, and vitamin E. Okinawans also regularly enjoy turmeric, which has been linked to significant anti-inflammatory and immune-boosting properties .

In Okinawa, people tend to go through life within a tightly knit social circle. They also strongly believe in a sense of purpose, or reason for getting up in the morning, as a driving force throughout their lives. Much of the mental health and physical health of Okinawans could be attributed to these philosophies, perhaps as much as to their diet.

The lifestyle of Sardinians has quite a few similarities to that of Okinawans. They typically eat a plant-based diet accented with grass-fed cheeses, and stay active throughout the day as part of their normal activities. They also place a great deal of respect on their elderly population.

In Loma Linda, California, the Seventh Day Adventist community has the greatest number of centenarians in the United States. Members of this community eat chiefly green plants, legumes and seeds. They also have closely-knit social circles, and stay active by participating in nature walks.

Residents of the Greek island of Ikaria also have unusually long lifespans. Their diet is largely based on fresh vegetables, olive oil and antioxidant-filled herbal teas. As the island is largely rural, they also get some exercise throughout the day, and go through life with many of the same people that they’ve known since they were born. Starting to notice a pattern?

The cultures that enjoy the longest, healthiest lives generally eat mainly plant-based diets, spend time among nature, make physical activity a part of their daily lives, and have deep social connections. They also frequently have a strong sense of purpose woven into their mindsets, and, in many cases, enjoy regular ‘downtime’ to unwind from the hustle and bustle of their days.

How long do you want to live?

During his talk, Dan Buettner references a 1996 study of Danish twins, which was published in Human Genetics. This study found that only ten percent of longevity is based on genetics, and the other ninety percent depends on other factors, largely environmental and lifestyle based.

This illustrates that while unexpected things do happen, choosing to live in a way that harmonizes with nature, and is rich with meaningful connections, really can dramatically raise your chances of living a healthy life to a ripe, old age.