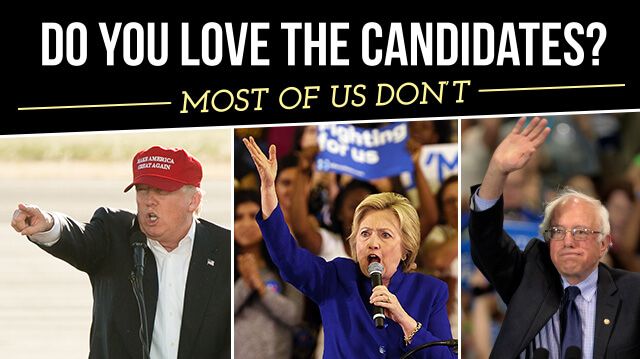 To say this election year has been frustrating is an understatement — a poll that found 70 percent of us are frustrated with the 2016 presidential election. It was conducted by the Associated Press-NORC Center for Public Affairs Research.

There are a few surprising results from the poll, but some of the answers should feel familiar. For example, although many of us differ in political opinion, frustration with the current system is a bipartisan issue in about equal numbers among Republicans and Democrats. Both groups find themselves at least “annoyed” by what’s going on in Washington. Meanwhile, nine in 10 Americans lack confidence in the system, the political parties, the nominating process and even in the three branches of government.

What’s more, voters polled didn’t feel that the Republican or Democratic parties were receptive to new ideas or new ways of doing things. That certainly coincides with the the voters’ choices of Donald Trump and Bernie Sanders over the clear preferences of their party’s leadership.

Here are some of the results:

Conversely, around 56 percent have a great deal of confidence in the military. This is refreshing and clearly shows that we’re not cynical about everything attached to the federal government.

Seventy percent of us are frustrated

Overall, people are fed up. Seven in 10 Americans report frustration over the presidential race, while more than half reported feeling angry about it. It turns out a majority of us also believe that the two-party system isn’t working, while 49 percent say it’s seriously flawed but can still work with some improvements. Whether or not we’ll see those improvements is another story.

Problems with the current system

We operate under a representative democracy, in which our votes essentially tell electors of the Electoral College who to vote for, rather than counting one vote per person. This is a major problem in a winner-take-all state, where all votes for the state’s electors go the candidate who wins a majority. The runner-up doesn’t get even a portion of the votes, and that’s hardly representative of everyday folks.

“It’s kind of like a rigged election,” said Nayef Jaber of San Rafael, Calif. “It’s supposed to be one man, one vote.” Jaber is a Sanders supporter, and the Vermont Senator definitely has gotten the short end of the stick when it comes to winner-take-all states against opponent Hillary Clinton. Though they disagree on many points, both Sanders and Trump have criticized the primary process. Nothing like a broken system to unite the party, huh?

Then there’s the whole mess with the Democratic Party’s superdelegate system, which only two in 10 Americans consider a good idea. In 1982, the Democrats embraced superdelegates so that the party itself would have a say in who gets nominated. According to the AP, “By giving key insiders more voice, leaders hoped to avoid what some saw as a mistake in 1972, when George McGovern won the nomination but was a weak general election candidate.”

Around 15 percent of all the delegates on the Democratic side are superdelegates. Sanders supporters say that this has given Clinton an unfair advantage in the race. Oddly enough, 67 percent of Republicans but only 46 percent of Democrats consider superdelegates harmful to the process. You’d think it would be the other way around.

People don’t like caucuses either, with 81 percent of people preferring primaries to the lengthy caucus process. Primaries are simply easier for people to participate in, and early voting in primaries is convenient.

Thoughts about the candidates

Most of us agree: things need to change. If we use poll results as a representative sample of the nation, it’s clear the majority of us lack confidence in the government, want change, don’t feel like our opinions are considered by the political parties and don’t view the parties as receptive to fresh ideas. No wonder Trump and Sanders are so popular: they’re different and promising to bring change.

Judging by these results, voters seem to feel that just being different is a move in the right direction.