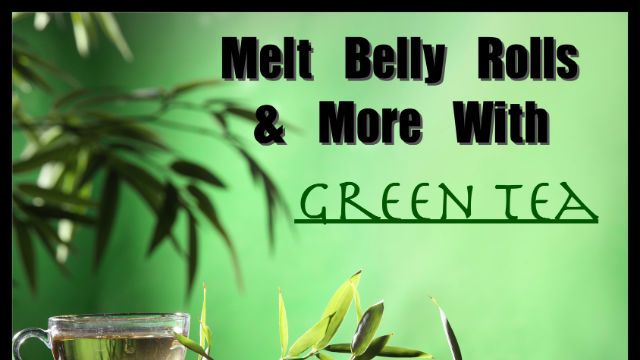 For some time now, it seems like the health community is abuzz with talk of green tea – and for good reason! There doesn’t seem to be much that this supercharged beverage can’t do.

Green tea, like its black tea relatives, is made from the leaves of the Camellia sinensis plant. The difference lies in how the leaves are treated. To make black and oolong teas, the leaves are dried and fermented. For green tea, on the other hand, the leaves are simply dried and withered, leaving many natural antioxidants intact.

One antioxidant group found in green tea – preserved by the gentle process by which the leaves are treated – is known as the catechin group. Six different catechins have been identified in green tea by researchers.These antioxidants have been linked to many health benefits, including being one of your greatest allies in the war against belly rolls.

When you sit down or bend over are there a few extra rolls getting in the way? Belly rolls can be super stubborn and even though you may be exercising and eating well, they may still plague you. Here is some good news….

A 2009 study published in the Journal of Nutrition tested the effects of green tea catechins on a group of overweight and obese adults. The group was placed on an exercise plan in order to help them lose weight, while supplementing with the catechins. On their results, the study authors wrote:

These observed benefits may be at least partly due to the presence of epigallocatechin gallate (EGCG), a noteable catechin found in green tea. Along with helping to fight belly fat, EGCG has been linked to increasing metabolism, releasing stored fat in the body, and combating cravings.

Green tea may even help to rid your body of unwanted cellulite.

Drinking green tea has been linked to a reduced risk of several types of cancers. A 2014 study performed at the Los Angeles Biomedical Research Institute at Harbor-UCLA Medical Center found that EGCG helped to slow the growth of pancreatic cancer cells – and may even induce tumor cell death.

Another study, performed in 2013 and published in the Journal of Nutritional Biochemistry, found that green tea could help to stunt the growth of breast cancer cells. The study authors wrote:

“The present study demonstrated that the CS [Camellia sinensis] aqueous extract, which closely mimics green tea beverage, has potent antitumor and anti-metastasis effects in breast cancer and could protect the bone from breast cancer-induced bone destruction.”

Research has also linked green tea, and namely EGCG, to inhibiting the growth of prostate, cervical and colorectal cancers.

A 2013 study performed at Chung-Ang University College of Medicine in South Korea linked green tea to reduced blood sugar levels and improved insulin sensitivity. The researchers state that green tea could be beneficial in both the prevention, and potentially the treatment, of type 2 diabetes.

The many antioxidants in green tea – including the catechins as well as flavonoids – are linked to improving artery function and helping to prevent the aggregation of platelets (a known factor in heart disease). The authors of a 2013 study published in the Diabetes & Metabolism Journal wrote:

“A population-based, prospective cohort study has shown that green tea consumption is associated with reduced mortality due to all causes and cardiovascular disease as well, and randomized controlled trials have indicated that green tea is effective in decreasing blood pressure, low density lipoprotein cholesterol, oxidative stress, and a marker of chronic inflammation.”

Green tea is highly anti-inflammatory in nature, thus helping to lower the risk of many diseases with chronic inflammation at their core. In fact, the catechins in green tea have been found to be even more potent than vitamins C and E in combating oxidative stress damage to cells.

A 2014 study performed at the University of Basel in Switzerland associated green tea extract with a boost in overall cognitive function, including working memory. The researchers hypothesize that green tea could be used to prevent and potentially improve cognitive conditions such as dementia.

The study authors wrote: “Our findings suggest that green tea might increase the short-term synaptic plasticity of the brain.”

Feeling stressed out or depressed? Green tea may be able to help. Drinking green tea has been linked to lower instances of depression in elderly individuals. This tea also contains an amino acid known as theanine, which is known to help ease anxiety and stress.

The polyphenol antioxidants found in green tea not only lower disease-promoting inflammation, they are also linked to slowing down the signs of aging, reducing sun damage, and promoting healthy, vibrant skin and hair.

Drinking green tea can help to block the production of an enzyme known as chemokine in the body. These enzymes are linked to inflammation, and especially to compromising cartilage. Because of its suppression of this enzyme, green tea is linked to potentially reducing the risk of rheumatoid arthritis.

A 2009 study published in the Journal of Periodontology found that drinking green tea on a regular basis may help to promote healthy teeth and gums, as well as to reduce the risk of periodontal disease. This is key, as periodontal disease is linked to the progression of both diabetes and heart disease.

The EGCG found in green tea has been linked to inhibiting certain histamine-producing cell receptors. This may help to prevent, or ease, reactions to common allergens.

On top of these benefits, drinking organic green tea can also help you:

If you’re not drinking green tea on a regular basis already, it’s clear that now may be the perfect time to start! For the best cup you can steep, use organic, loose-leaf green tea leaves from a source you trust.