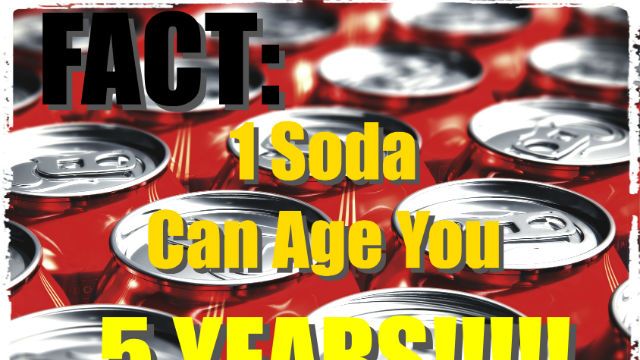 Are you STILL drinking soda? If not, kudos! If so, even just one in the afternoon, you may wish to take a second look at all of the research. In the past several years, soda has been strongly linked to obesity, type 2 diabetes, metabolic syndrome, heart disease, tooth decay and certain cancers.

If that’s not enough to convince you, a new study performed at the University of California, San Francisco, has linked drinking just 20 ounces of soda per day to aging nearly 5 years.

According to Elissa Epel, one of the study’s authors, “regular consumption of sugar-sweetened sodas might influence disease development, not only by straining the body’s metabolic control of sugars, but also through accelerated cellular aging of tissues.”

To arrive at this conclusion, researchers examined DNA samples from 5,309 volunteers between the ages of 20 to 65. None of the participants had a history of heart disease or diabetes. The diet of the participants was monitored, and their telomeres were measured.

Telomeres are proteins located on the ends of chromosomes. They serve to protect the chromosome from damage. When telomeres are long, the cell is able to properly function if there are no other damaging factors. Telomere shortening, on the other hand, is linked to inflammation, oxidative damage and insulin resistance. As we age, our telomeres naturally shorten, and cells stop dividing.

Based on the shortening of the telomeres observed in soda-drinkers in this study, the researchers calculated that these individuals were cutting into their lifespans by 4.6 years. This effect closely resembles the effects of smoking cigarettes. Worryingly, 21 percent of the study participants reported drinking at least one 20-ounce soda per day.

Epel is now working on a new study to examine the effects of soda on cellular aging in real time. While more research needs to be done, what we know now is disastrous. If you haven’t given up the fizzy habit yet, today is the day.