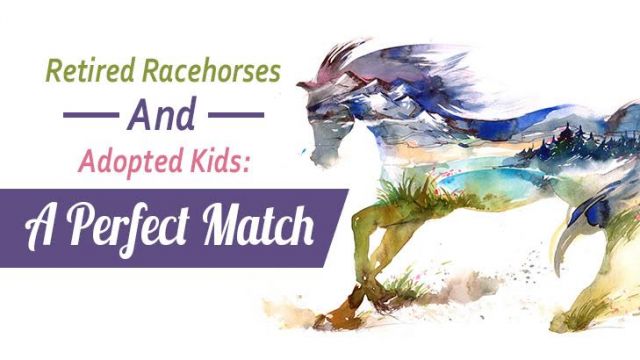 Dean and Mary Osgood, along with Mary’s sister Tish Carlson and her husband Clint, care for five horses and 15 adopted children between the two couples at their farm in Sauk County, Wisconsin.

Even though US-based equine slaughterhouses closed down in 2007, that doesn’t mean US horses aren’t still in the slaughter pipeline. Each year, approximately 100,000 horses make the long, grueling trip to their final fate in a Mexican or Canadian slaughterhouse. Some of these animals are former racehorses. Many equine organizations have sprung up to save and rehome these horses so they don’t end up on European or Asian dinner plates.

The former racehorses on the Osgood farm all came from the Illinois-based Galloping Out, a nonprofit organization dedicated to rehoming thoroughbreds running at Arlington Park or Hawthorne Racecourse after their careers are over. Galloping Out is funded by the Illinois Thoroughbred Horsemen’s Association and other donors. All adopters must provide references and site checks are usually done. Horses are adopted out with a strict no-breeding clause for mares. In addition to sponsoring thoroughbred-only classes and/or divisions at horse shows, Galloping Out sends a horse to a local college equestrian program each semester.

The thoroughbreds aren’t the only equines living at the farm. There are nine others, along with a miniature donkey.

The family includes two kids who were victims of failed international adoptions, one from Russia and the other from Africa. One child suffers from fetal alcohol syndrome, a result of his mother’s heavy drinking during pregnancy. One girl came to the farm directly from a psychiatric facility, placed there after her mother’s physical and emotional abuse. Many of the kids came from drug-addicted parents.

The rest of the menagerie

Besides the horses, the Osgood farm is home to seven dogs, three cats and a goat. The kids pitch in to care for the horses and other pets. It’s part of life in a large family, and it’s also therapeutic on many levels.

The couples want to make sure people understand that their children face many challenges. The Chicago Tribune quoted Mary Osgood as saying that all of the kids come with “a lot of baggage,” and relinquished children often experience violent outbursts, inappropriate sexual behaviors, night terrors and even “fecal smearing.” The couples persevere with love and attention.

A Galloping Out volunteer came to the farm and recalls one young, traumatized girl who had stopped speaking. She put her on a horse, and the child immediately started screaming. However, after a few short walks around the arena, the screaming turned into laughing and contentment. The children ride the horses regularly, and one daughter has joined the US Pony Club and takes dressage lessons each week.

Neither of the sisters are certified equine therapists, but equine-assisted therapy has done wonders with children and adults diagnosed with a multitude of emotional and psychological disorders. Kids with behavioral or emotional issues benefit from equine-assisted therapy because working with horses — whether grooming, feeding or riding — takes the focus off their own problems and allows them to concentrate on horse care. They must learn patience and impulse control when dealing with these large animals. Kids and horses easily form bonds, and it’s not unusual for children who have been nonverbal for a period of time to speak again to their equine friend. The skills learned working with horses carry over into other areas of life, especially personal interaction.

At this Wisconsin sanctuary for children and horses, “throwaway” kids and equines learn what it means to give and receive love and to trust once more.