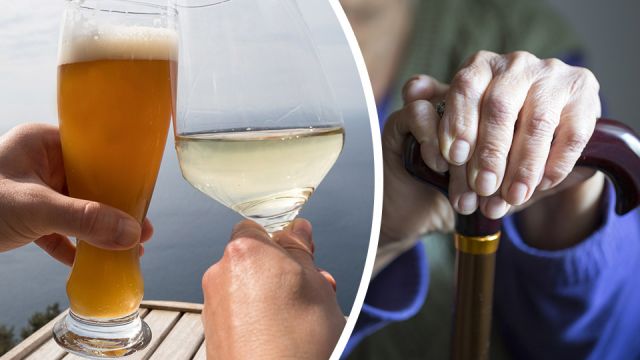 For those of you who enjoy a glass of wine or two over dinner, take heart: a new study presented at the recent American Association for the Advancement of Science (AAAS) annual meeting suggests that it might be helping you live longer.

The findings, presented as part of a 15-year study to better understand the factors behind a long, healthy life, show people who live to 90 or older tend to be moderate drinkers.

Since 2003, Neurologist Claudia Kawas and her team of researchers have followed the lifestyle and dietary habits of over 1600 old timers between the ages of 90 and 99. Over the years, her digging into what makes the “oldest old” tick has revealed some fresh new insights into aging gracefully, and not-so-gracefully. Her team has produced authoritative articles on leading causes of dementia, linking neurological decline in the elderly to poor physical performance, less education and certain genetic variations.

But a positive association between moderate alcoholic habits and long life isn’t exactly what Kawas and her team had anticipated. According to the findings, drinking two glasses of wine or beer per day was linked to an 18 percent lower risk of dying prematurely. “I have no explanation for it,” she reportedly said at the AAAS meeting last week. “But I do firmly believe that modest drinking improves longevity.”

What’s needed now is more research into why exactly there’s that link between moderate drinking and long life.

A scientific take on drinking and your health

While the notion that actually drinking more might actually make you healthier might seem a little hard to swallow for some, it’s a concept that’s picking up steam in the scientific world. Earlier this month, in fact, a study published in the Journal of NeuroImage showed that moderate drinking in middle-aged men is associated with improved brain white matter — a part of the central nervous system that affects learning and brain function.

Continuing this theme of positivity, a 2015 study showed that moderate alcohol intake (especially red wine) is associated with modest decreases in cardiometabolic risk. A 2016 study showed the same small improvement in cardiovascular health from mild to moderate beer drinking, and there are even scientists who maintain that moderate wine drinking in particular can bring about beneficial changes in diabetes, osteoporosis and neurological diseases.

But the pro-alcohol research is still pretty thin on the ground, and there are plenty of studies that show a complete opposite effect from regular alcohol intake. Most of those studies, however, tend to examine the link between heavy alcohol consumption and disease risk. In fact, a 2014 study showed that negative links between light-to-moderate alcohol consumption and health concerns might simply be due to underreporting.

Whatever the consensus, it’s always a good idea to practice moderation when it comes to alcohol… if for no other reason that to avoid making a fool of yourself at parties on the weekend!

Need a drink? Here are some healthy choices

While it appears that moderate alcohol consumption of any kind may have its merits, some drinks are far healthier than others. Here’s a list of alcoholic beverages that are a cut above the rest in terms of vitamins, antioxidants and other beneficial compounds.

It’s probably no great surprise to see red wine in a list of the healthiest alcoholic drinks on the planet. Red wine is famous for its high levels of bioflavonoids, a group of antioxidants that have been linked to lowered inflammation and improved cardiovascular health. Red wine is also loaded with resveratrol, a compound that has been linked to longer life and lowered risk of cancer.

I’m a big fan of red wine, but I’ve seen enough of standard viticultural practices to know that a lot of nasty chemicals make it into the average bottle of wine. In order to avoid unwanted pesticide and synthetic fertilizer residues, I always true to get my hands on organic red wine.

We’ve all heard about how a pint of Guinness is just what the doctor ordered when it comes to a wide range of maladies. Well, just what your Irish grandad ordered, anyway.

But while Guinness and other stout beers are undoubtedly high in certain beneficial nutrients, their therapeutic qualities pale in comparison to a new creation by a group of researchers at the University of Singapore. After careful study, they’ve created a probiotic sour beer that can support healthy digestion, promote solid gut health and boost immunity.

All that, and I hear it doesn’t taste half bad either!

While they might be relatively light on the antioxidant front, high-quality batches of vodka, tequila and gin are a good choice for anyone wanting to drink an alcoholic beverage that isn’t loaded with toxins. Spirits like these that have been properly distilled and filtered tend to be free of gluten and other additives, and have been shown to have lower levels of congeners (byproducts of fermentation)… and that means less of a nasty hangover the next morning!

Got a cold, cough or sore throat? There’s an alcoholic beverage for that too! Check out these tried-and-true alcoholic recipes for curing anything from tonsillitis to the flu.