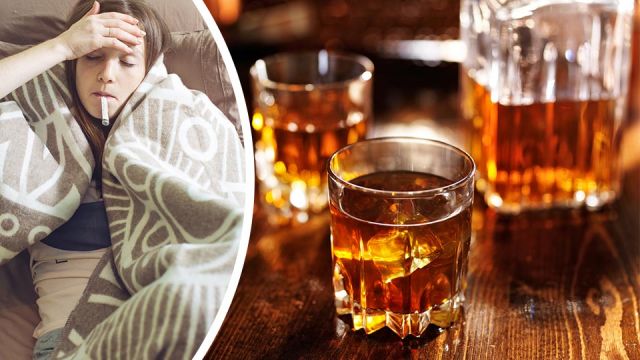 Winter is upon us, and so too is the season of coughing, sneezing, snuffling and wheezing. No matter how healthy you are, there’s a very good chance you’ll be coming down with a cold some time over the next three or four months. Sorry.

But rather than reaching for that dusty pack of Coldrex hiding in the bottom of your medicine cabinet, why not reach for the booze cabinet instead? Here are four alcoholic drinks that might just give that stubborn seasonal sickness the boot.

Alcohol as medicine? Well, I never!

Believe it or not, long before modern alcoholic beverages were being consumed for pleasurable pastimes, they were being administered for medical pursuits.

As with most things, nature provided the cue. As civilization began to spread across the world with the advent of the agricultural revolution some 30,000 years ago, stockpiles of grains, fruit and honey began to accumulate. In those rare instances when our early civilized ancestors didn’t eat or drink all their food stockpiles, those that contained natural sugars began to ferment and turn into alcohol. An unsuspecting slurp from the old vat of honey or a slurp from the aged apricot juice told our forebears that something very exciting was afoot.

Officially, the first recorded evidence of alcohol use and abuse dates back to around 7000 BCE, where the early Egyptians began to intentionally ferment various foodstuffs and create their own crude brew. Much of Asia and then Europe soon followed suit, to the point where the ancient Greeks were actually starting to make a half-decent alcoholic beverage called mead as early as 2700 BCE.

But these were fairly weak alcoholic concoctions. By the sixteenth century, however, a new breed of strong spirits was being produced that now had a slightly more serious use: medicine. A trip down to the doctor’s office would invariably end with a healthy tipple of whatever spirit they had on hand, as a cure-all and general health-bringing tonic.

Surgeons soon began to realize the importance of sanitization in their theaters, and began to use spirits as a surefire way to banish harmful bacteria. If anyone came down with a cold, flu or any other malady that didn’t require a trip to the doctor, it was down the hatch with a strong dose of whisky, gin or anything else of the strongest booze to hand.

And while the sixteenth-century medical community may have been slightly confused about notions of healing and human anatomy, they were certainly onto something with alcohol: it had real merit as a medicinal tonic.

Whiskey for a cough

Is there anything more annoying than a nasty wracking cough when you’re trying to sleep at night? You’re finally about to fall into a deep restorative slumber and then you start to feel a tickle. The tickle gets harder and harder to ignore until bam! The cough explodes out of your lungs and you (and probably your hapless partner) are wide awake.

Rather than reaching for the cough syrup, which is positively loaded with nasty chemicals and compounds that’ll do you more harm than good, reach for the whiskey bottle instead! Far from this implying that you have alcoholic tendencies, putting together a restorative “bourbon cough syrup” will verify your good judgment and have that niggling cough banished in no time.

In a jar, throw in a shot of whiskey, a splash of warm water and a dash of raw honey. Put the lid on, give it a good shake, and slowly sip back your anti-cough cocktail. Resist the temptation to shot the whole thing back in one delicious gulp, as this will reduce its effectiveness on your throat and respiratory passages.

Vodka for a sore throat

When it’s done right, vodka is one of the purest forms of alcohol. It might burn going down, but that burn spells big trouble for the harmful bacteria hiding out in the back of your mouth and the cavities of your throat. Using vodka for a sore throat is simple. Pour a little high-quality vodka into a shot glass, gargle for 20 seconds (or as long as you can stand), then slowly swallow the potent brew.

Repeat a few times a day, preferably not immediately before performing any potentially life-threatening activity like driving or white water rafting, and be sure not to mix vodka with any other cold medications.

Believe it or not, it’s perfectly okay to drink cognac when you’re no longer dressed in a classy suit with a cigar smoking in the other hand. Cognac, that glorious amber nectar, is purported to be dynamite against a sore throat and has even been used in the past to treat a strong case of tonsillitis. It makes sense — the natural ethanol and potent aromatics in cognac are strong antibacterials, the very cause of both sore throats and recurrent tonsillitis.

In a pan, mix together two tablespoons of ground cumin with two cups of water. Bring to the boil, stirring regularly, then lower heat and allow to simmer until the mixture has reduced to a thick slurry. Strain the liquid, and once it cools add a tablespoon of cognac and stir until thoroughly mixed in. Take a teaspoon of your cognac throat remedy once an hour until the pain recedes.

Jagermeister for colds and flu

Originally created as a digestif, traditional Jagermeister is infused with a range of medicinal herbs that make it a great drink for stimulating digestion, but also for speeding recovery from a mild cold or flu. Simply take a shot of pure Jagermeister, preferably warmed, a few times a day to help clear congested airways, kill off sore throat-causing bacteria and boost your immune system all at the same time.

Personally, I’ve had far too many mildly traumatic shots of Jagermeister in the past to make this my go-to anti-cold drink of choice, but millions of people swear by it!