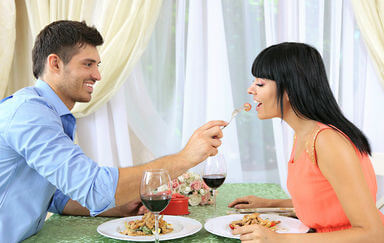 Who hasn’t looked to spice up their sex life just a touch? It’s no secret that the use of food as an aphrodisiac has been around since the beginning of time. And while many modern health professionals will pooh-pooh the idea, there’s plenty of truth to the fact that certain foods help set the mood.

Try some of these healthy organic meal ideas the next time you need a little inspiration to light up the libido.

Why so sexy? You may not consider a salad as a romance-inspiring dish, but all of these ingredients have long been touted for their aphrodisiac-like qualities.

Arugula’s use as an arousal aid has been noted since the first century. And the abundance of trace minerals helps block absorption of toxic contaminants that are known libido-inhibitors.

Ancient Aztecs actually referred to avocados as “testicles” and this alluring fruit was once thought so sexy that Spanish Catholic priests forbade parishioners to eat them. In reality, the heart-healthy fats in avocado keep the blood pumping strong to all the right places and prevent a man’s chances of developing erectile dysfunction.

Almonds have long been touted to support sexual health. This is probably due to the trace mineral zinc, a known libido-enhancer.

Nothing is sexier than the color red! So don’t be afraid to add organic strawberries to any dish. Plus you’ll be getting an added dose of antioxidants.

The combination of figs and citrus juices in the vinaigrette is a sure way to set the mood. Figs are known as a fertility booster and citrus fruits’ folic acid plays an important role in a man’s reproductive health.

Why so sexy? Perhaps one of the most well-known aphrodisiacs is the oyster. You can serve them up on the half-shell or Rockefeller-style. Their high zinc content plays a vital role in testosterone production and they are known to enhance dopamine levels, giving the libido a little kick into action. They are also highly sustainable, so unlike many other seafood choices, you’ll be doing both your body and the environment a favor!

Vegetables such as carrots and asparagus achieved their aphrodisiac status thanks in part to their phallic shapes. But they are also bursting with important vitamins and minerals that help light the fire. Try adding a pinch of organic garlic. Garlic’s allicin content is thought to increase blood flow right where it needs to go.

Why so sexy? Let’s face it, chocolate and romance go hand-in-hand. But avoid all the processing of the sugar-laden chocolates in those cute red boxes. Instead make your own organic raw cocoa fudge with organic raw honey (also known for its ability to stir up the libido) with this recipe: