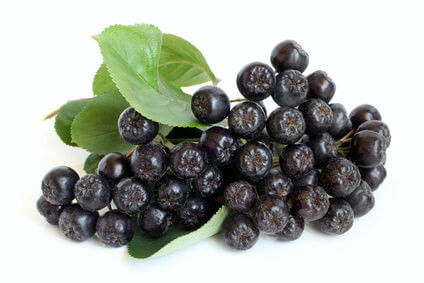 The chokeberry (Aronia melanocarpa), also called black chokeberry, aroniaberry or simply aronia, is a cranberry-like berry that grows east of the Appalachian mountains just over the Canadian border.

While it is a lesser-known berry, it has powerful antioxidant properties, and research has linked its extract to lowered risks of diabetes and heart disease, as well as to easing symptoms related to diabetes.

Chokeberries have been found to have higher antioxidant and anthocyanin levels than many other berries, including gooseberries, elderberries, red currants and black currants. Antioxidants are linked to protecting the cells from free radicals, which may cause oxidative damage in the body.

Anthocyanins have also been associated with combating the effects of free radicals, and may help to reduce inflammation throughout the body’s systems, as well as to lower the risk of a number of cancers. Along with their antioxidant and anthocyanin content, chokeberries are low in natural sugars, and rich in vitamins, minerals and quercetin.

A study  presented by the U.S. Department of Agriculture (USDA) was performed on 18 adult male rats with pre-diabetes. Some of the rats were given chokeberry extract, in either high or low doses, over the course of six weeks. A control group was given plain water.

When the rats were analyzed, researchers found that the rats who had received the chokeberry extract weighed less than the control group rats, and also had less body fat. In particular, the researchers noticed that the chokeberry-supplemented rats showed less abdominal fat. The rats that were given chokeberry extract also had lower blood sugar levels, plasma triglyceride levels, and cholesterol and low-density lipoprotein (LDL) cholesterol levels.

When the genetic changes in the rats were examined at the end of the six weeks, researchers noted that the gene expression had changed in such a way to discourage chronic inflammation. Chronic inflammation is associated with a number of illnesses including type 2 diabetes, heart disease, arthritis, osteoporosis and Alzheimer’s disease.

While the researchers caution that human studies are needed to support the effects of chokeberry extract, Bolin Qin and Richard Anderson, both with the USDA, stated that the study, “provides evidence that the chokeberry extract inhibits weight gain in insulin-resistant animals and that it modulates multiple genes associated with adipose tissue growth, blood glucose regulation and inflammatory pathways.”

Chokeberries possess a mild, cranberry-esque flavor, and are easy to incorporate into smoothies, fruit salads, savory salads, trail mixes and meat dishes, to name only a few suggestions. They can also be eaten raw or dried.

Whatever way you choose to eat them, it is worth it to give this ‘superfruit’ a chance to boost the health quotient of your meals.