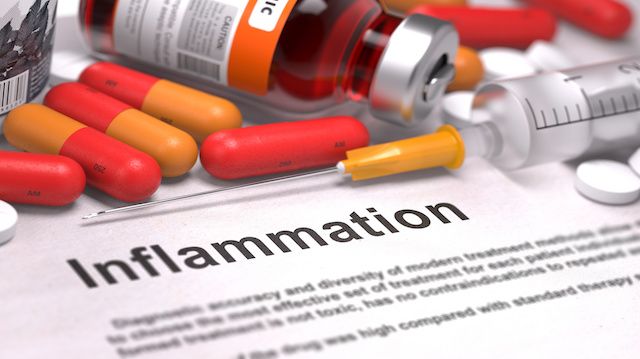 When it comes to living a healthier life, making a plan to tackle chronic inflammation is of the utmost importance. A growing body of research has connected inflammation to a host of serious illnesses, including both heart disease and cancers. For this reason, getting inflammation under control is essential.

Inflammation, when it is short term, is an innate immune system reaction that serves to protect us. According to the medical dictionary, inflammation is, “a protective tissue response to injury or destruction of tissues, which serves to destroy, dilute, or wall off both the injurious agent and the injured tissues. The classical signs of acute inflammation are pain, heat, redness, swelling, and loss of function.”

The problem with this immune reaction is that when it becomes chronic, and does not subside, many of the body’s systems can experience damage. The more science discovers about chronic inflammation, the more apparent it becomes just how dangerous it is.

A new study, recently published in the Journal of Leukocyte Biology, has linked inflammation to a higher rate of tumor growth and metastasis. According to the study’s lead author, Vijaya L. Iragavarapu-Charyulu:

“Important findings from our research show how pre-existing inflammation may be one of the factors that accelerates metastasis to the inflamed site.”

For their study, researchers introduced breast cancer cells to two groups of rats, one of which had a certain biomarker, known as CHI3L1, altered in their inflamed tissues. Results of the study showed that the rats with less inflammation had a slower tumor growth, and less instances of metastasis, than the control group.

On the results, Iragavarapu-Charyulu stated:

“In this study, we found that CH13L1 was an important inflammatory protein that promoted tumor growth and metastasis, providing the necessary ‘soil’ or the proper environment for the ‘seeds,’ that is the circulating breast tumor cells. We are encouraged by the results of our study and hopeful that it will help us to better develop targeted therapeutics to treat cancer.”

Other research linking inflammation to illness

A 2010 study published in Nature Reviews Neuroscience found a connection between inflammation and depression. The authors of this study wrote:

“In response to a peripheral infection, innate immune cells produce pro-inflammatory cytokines that act on the brain to cause sickness behaviour. When activation of the peripheral immune system continues unabated, such as during systemic infections, cancer or autoimmune diseases, the ensuing immune signalling to the brain can lead to an exacerbation of sickness and the development of symptoms of depression in vulnerable individuals.”

The study authors added, “These phenomena might account for the increased prevalence of clinical depression in physically ill people.”

A 2002 study published in the journal Circulation linked inflammation to atherosclerosis, the hardening of the arteries, which is often a precursor to heart disease. The authors wrote:

“Atherosclerosis, formerly considered a bland lipid storage disease, actually involves an ongoing inflammatory response. Recent advances in basic science have established a fundamental role for inflammation in mediating all stages of this disease from initiation through progression and, ultimately, the thrombotic complications of atherosclerosis.”

Furthermore, to summarize just a few of the diseases that inflammation may trigger or worsen, the authors of a 2009 study published in the journal Inflammation Research wrote:

“Chronic inflammation is being shown to be increasingly involved in the onset and development of several pathological disturbances such as arteriosclerosis, obesity, diabetes, neurodegenerative diseases and even cancer.”

How to help prevent — and tackle existing — inflammation

One very important factor that affects the level of inflammation in your body is your diet. If you are eating a great deal of inflammatory foods such as sugar, wheat, and processed foods (which are made with an array of chemicals), it is an important step to cut these foods out.

Instead, fill your plate with whole, nutritious foods, including plenty of antioxidant-rich fruits and veggies. Antioxidants help to reduce inflammation throughout the body by combating harmful free radicals, and thus reducing your risk of many illnesses.

A particularly important antioxidant group for fighting chronic inflammation is flavonoids. These are found in many fruits and veggies, including (but not at all limited to) berries, bananas, onions, apples, sweet potatoes, quinoa, chili peppers, peaches, tomatoes, turnip greens, cabbage, and citrus fruits.

On flavonoids, the authors of a 2009 study which reviewed the anti-inflammatory properties of these antioxidants wrote, “Recent studies have also shown that some flavonoids are modulators of proinflammatory gene expression, thus leading to the attenuation of the inflammatory response.”

To further explore the subject, the authors of a 2010 study published in the journal Food and Function wrote:

“Over the past few decades, inflammation has been recognized as a major risk factor for various human diseases… Numerous studies have proposed that flavonoids act through a variety mechanisms to prevent and attenuate inflammatory responses and serve as possible cardioprotective, neuroprotective and chemopreventive agents.” 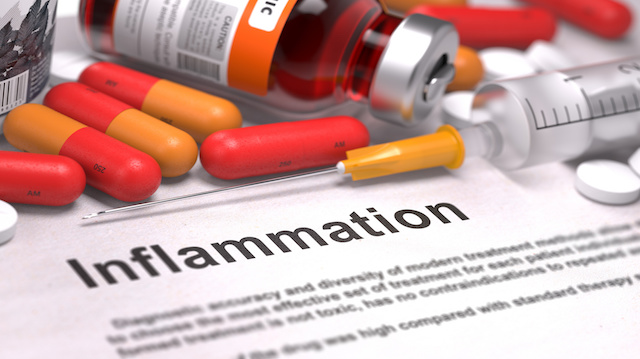 Having a healthy gut is also crucially important to the mitigation of chronic inflammation. The authors of a 2013 study published in the journal ELife wrote:

“Rheumatoid arthritis (RA) is a prevalent systemic autoimmune disease, caused by a combination of genetic and environmental factors. Animal models suggest a role for intestinal bacteria in supporting the systemic immune response required for joint inflammation.”

Just a few foods that are great for creating a healthy bacterial balance in your gut are organic yogurt and kefir, kimchi, and sauerkraut. Make sure that you are eating whole, unprocessed versions of these foods. Along with fruits and veggies, and gut-healthy probiotic foods, it’s important to eat enough fiber, healthy proteins, and healthy fats.

There are also a number of herbs that may help to reduce inflammation, but be sure to check with a health professional you trust before starting a regimen with any herbs — even though they are natural, they are still highly potent. Also, always make sure you obtain a high-quality version of these herbs as many imposters exist on the market.

Other important points to remember are to get enough sleep — at least seven hours per night — and to exercise at least 30 minutes three times a week. It is also crucial to schedule some stress relief into your day. Stress is a significant source of inflammation. It triggers the release of a hormone called cortisol in your body, which leads to elevated inflammation levels. Try yoga, meditation, tai chi, or just a long walk in nature with friends!

One more thing: Certain types of environmental pollutants, including household cleaners, may raise inflammation levels. It’s wise to keep your cleaning products as natural as possible — in many cases, a simple vinegar/water mixture does the trick! Check out these green home-cleaning recipes.

It may seem difficult at first, but it is well worth the effort to make these changes to your life and keep inflammation at bay. It may greatly reduce your risk of a chronic illness down the road.