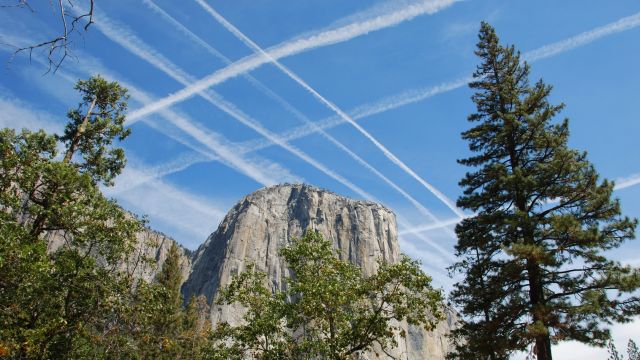 Conspiracies are often interesting half-truths, where facts are stretched in order to support a core idea or suggestion. Although these conspiracies are generally harmless, they can also be dangerous — causing conflicting views on matters that truly do exist based on scientific evidence.

Chemtrails are a hot topic amongst a wide range of groups, and although they most certainly raise environmental concerns, these concerns may be causing more harm than good. What are chemtrails and what role do they play in global climate change?

What the heck are chemtrails anyway?

You probably see them daily — fluffy white lines in the sky, which do not dissipate. For years, many theories have surfaced regarding the government’s role in geoengineering. I must admit, I have always been intrigued by chemtrails which are said to affect unsuspecting humans and the environment.

The claim is this: governments around the globe are spreading chemicals such as aluminum salts, biological agents, polymer fibers and barium crystals. The purpose, as stated by these theories, is that government agencies and organizations are trying to control the weather for military purposes — poisoning us and the our planet.

Being a nature-loving girl from Canada, I look up to David Suzuki. He is an incredible academic, scientist and environmental activist who has dedicated his life to positive change — not just for us Canadians, but for the global population. Here he is, reflecting before his 80th birthday. After watching this short clip, you too, will find him incredible.

As he stated in one of his articles, “I’m a scientist, so I look at credible science — and there is none for the existence of chemtrails.” He explains that based on his experience and the current research, these trails are simply condensation formed when hot, humid air from jets mixes with colder, low-vapor-pressure air.

This surprised me — but even more interesting was his thoughts on chemtrails in terms of the bigger picture. After writing an article about geoengineering as a true strategy to deal with climate change, he focused on those who who have been confusing this process with the unscientific theory of chemtrails.

His main concern is that people are believing this phenomena (whether it holds truth or not), but rejecting what science makes very clear — climate change is real. As he mentions, the broad concept of chemtrails is something that would require a worldwide collusion between global government agencies to scientists, pilots to airline companies.

Suzuki is concerned about the connection between climate change denial and those who believe in chemtrails. He’s shocked at how many people whole-heartedly believe in this conspiracy theory, yet dismiss a potentially catastrophic phenomenon — climate change is serious and over the past few decades, overwhelming evidence has surfaced.

Within a study published in Psychological Science, it was found that “the endorsement of a cluster of conspiracy theories, predicts rejection of climate science — as well as other key scientific findings.” In turn, many are viewing global climate change as a hoax, once again implemented by government agencies, environmentalists and scientific institutions in order to build a socialist world.

In other cases, Suzuki says that many accept climate change, but do not believe that humans are responsible. He admits, science is very rarely 100 percent accurate — but we cannot ignore the progress we’ve made. Our actions do have consequences and one thing is clear — climate change caused by humans, is the most pressing threat to our humanity.

He’s concerned that we do not have time to continually debunk conspiracy theories — we need to resolve certainties. So, how do we know that global warming has been caused by humans?

We can no longer ignore the facts

Within a key article published by the Union of Concerned Scientists, there is a greater than 90 percent certainty that the emissions of heat-trapping gases created from human activity have caused rising temperatures — beginning in the mid-20th century.

It is important to mention that the Earth’s natural climate can cause warming and cooling. From the sun’s intensity to volcanic eruptions, climate drivers have existed far before humans. So, how is it certain that humans are to blame? Here are a couple of key points:

What can I do?

The problem is, many of us think we can’t do anything about climate change — even if we’re firm believers that humans are the cause. It’s that mentality that’s so destructive, we need to work together. Your tiny carbon footprint can impact the bigger picture, and here is how you can help:

From composting to carpooling, there are plenty of ways in which you can make a difference. Although it’s important to be aware — which is clearly what’s happening in terms of chemtrail conspiracies — we also need to be practical. The bottom line is, conspiracies do not hold enough scientific evidence, but climate change is undeniable.

Let’s focus more on the facts and what can be done, instead of concerns over what could be happening. Do your part — stay informed and take true action. If you are someone who is concerned about chemtrails, take that enthusiasm and level of frustration to make a positive impact on this alarming issue. Let’s make changes today, so humanity has a brighter future tomorrow.