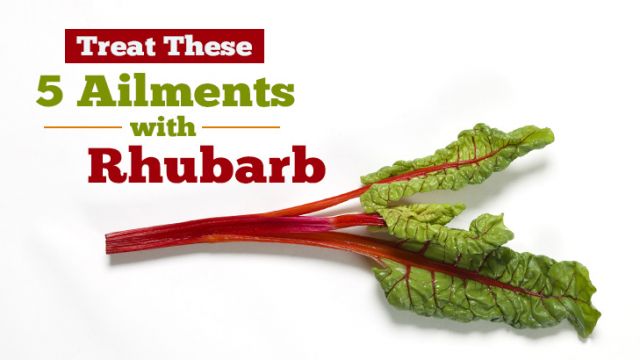 I never realized how good I actually had it as a kid — isn’t that always the case? Growing up, my mom was someone who focused on nutrient-rich foods, making sure our tummies were always full of fresh, homegrown foods. Our family garden was always enchanting to me — rows upon rows of brightly colored fruits and vegetables.

I’ll never forget the massive rhubarb bush we had, mainly because I thought the juice my mom made me drink was torture — it was quite tart. She used to pull one of those, “If you don’t finish your juice, we can’t go to the park.” Clever really, because no matter what concoction she whipped up, I plugged my nose and forced it down, so that my siblings and I could go play on the monkey bars.

Related: Rhubarb — The Tangy Treat That Is Also Good For You

Often mistaken for a fruit, rhubarb is actually a perennial vegetable. Amazingly, it is one of the oldest healing plants within Chinese medicine, used to both treat and prevent a wide range of conditions. Welcome rhubarb into your routine diet to benefit your health in the following ways:

Modern society is battling with chronic high cholesterol, leading to a range of cardiovascular concerns. It’s been reported that the insoluble fiber found in rhubarb, could essentially reduce elevated cholesterol levels. Within one key study, published in the Journal of American College of Nutrition, 10 men with high blood cholesterol were examined.

What they found, was that when given 27 grams of stalk fiber per day, for a total of four weeks, their total cholesterol levels were reduced by nine percent, exhibiting eight percent lower levels of LDL or “bad” cholesterol. Once supplementation stopped, the men’s cholesterol levels returned to baseline after just one month.

Chronic constipation can be extremely uncomfortable and painful, impacting one’s quality of life. Rhubarb has the ability to cleanse the bowel based on its laxative effects — mainly due to cathartic compounds in both the stalks and root. In addition to these compounds, rhubarb offers plenty of dietary fiber.

Severe menstrual pain relates to dysmenorrhoea — a group of symptoms that up to 60 percent of women experience. When taking rhubarb powder two times daily, two days prior to the expected date of menstruation, as well as three days during menstruation, it’s been found to be an effective remedy.

Acting as an alternative treatment, rhubarb can help alleviate symptoms of primary dysmenorrhoea without the associated side effects of medication. These findings were reported in a 2014 study, published in the Journal of Complementary and Integrative Medicine.

An inflammatory condition can impact one’s quality of life due to painful, persistent symptoms. Within one study, 40 patients with systemic inflammatory reaction syndrome were examined. It was concluded that rhubarb was an effective alternative treatment. This is due to rhubarb’s ability to suppress the expression of inflammatory cytokines and their receptors, resulting in a protective effect.

Also, the effective rate of slimming was significantly better when taking rhubarb extract, in comparison to the Chinese drug XPM. Not only is rhubarb rich in fiber, but also catechins — antioxidants that aid your body’s metabolism, supporting weight loss and improved digestion.

Prepare natural remedies highlighting the benefits of rhubarbTo address severe symptoms, such as those related to menstruation, a tincture or potent extract is ideal. In order to target inflammation, constipation and obesity, while improving your overall health, consuming rhubarb on a regular basis can help address a range of conditions, especially when combined with green tea, ginger and allspice.

Serves:
1
Recipe by:The Alternative Daily
This recipe is simple to make, helping you address a number of potential symptoms. When cooked, rhubarb’s properties become even more potent — all while offering a wide range of vitamins, minerals and organic compounds.
Ingredients
Servings: serving
Instructions
What to Do
[recipe_share]