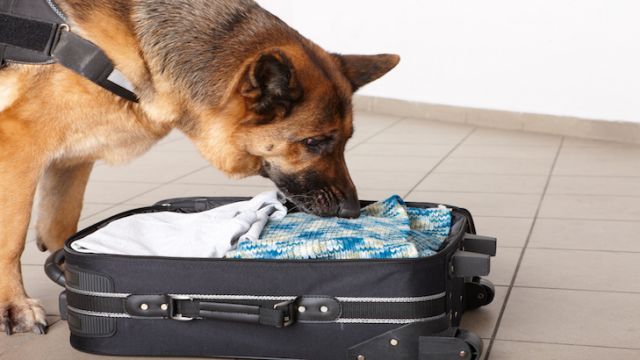 The first line of defense against airline terrorism has four legs and a tail. The Transportation Security Administration (TSA) has invested in specially bred and trained canines for deployment at the nation’s airports to sniff out explosives and stop terrorist attacks.

Many of the dogs undergo training at Lackland Air Force Base located in San Antonio, Texas. Since 9/11, the government has spent vast sums of money attempting to replicate a bomb dog’s sense of smell via technology, but there is currently no substitute for trained detection canines.

Increasingly, terrorists are using common household chemicals to concoct bombs, and that makes training TSA dogs even more challenging. As the New York Times put it, dogs are being asked to “identify a bomb before it becomes a bomb,” and the dogs are also taught whether the various chemical scents could combine into an explosive mix.

Of course, the government cannot reveal the types of chemicals and their combinations dogs are trained to identify. The nature of the chemicals the dogs are trained to detect changes based on intelligence. Bomb makers may enclose their explosive devices in caulk, so that the scent is less likely to leak out.

Bomb-sniffing dogs undergo months of intense training. Dogs trained specifically for explosive detection typically spend four months in training, while those learning to differentiate between various household chemicals are in training for six months. The training is play-based — recognize the scent and receive a toy. They must detect odors in a variety of scenarios, with mock-ups of the sites available at Lackland. The air force base includes 13 indoor venues for training purposes, including the following:

Although the majority of the dogs will work at airports, they are also trained to work on airplanes and trains. By the end of 2017, the TSA plans to have 322 dog and handler teams certified and working.

Dogs are allocated to specific airports and other sites based on the TSA’s risk determination calculation. The canine teams are always present at the country’s 40 busiest airports during peak travel times. Every day, TSA dogs screen tens of thousands of passengers.

All in a day’s work

Dogs typically work eight-hour shifts. If there’s an abandoned suitcase or similar item left in an airport, the team is right on it. They sniff out passengers and help reduce waiting times. To keep them at the top of their game, handlers regularly hide suspicious items in various locations around the airport for the dog to identify. These items are usually extremely well hidden, so finding them is a bit of an effort. Once they’re found, a treat is the reward.

The TSA and other national security agencies’ canines primarily come from Eastern Europe, where they are bred for detection purposes and receive basic training. Dogs arrive in the US between the ages of 12 to 18 months. Four breeds predominate:

These breeds not only have an excellent sense of smell, but they are easily trained and behave well in crowds.

Not all the TSA dogs make it through the program. Those that don’t are often available for adoption, as are retired bomb-sniffers. All such dogs are spayed, neutered and trained to a certain degree. Since they were chosen for their high drive, these are not pets for couch potato owners. They also aren’t used to living in homes, so expect some period of adjustment. Dogs range in age from two to 10

Applicants are carefully screened by the TSA to ensure an appropriate fit. While there is no fee for approved applicants, the dogs are located in San Antonio, Texas. The applicant must travel to San Antonio, have a meet-and-greet, and take the dog back home if all goes well. All travel is at the applicant’s expense.

The next time you’re waiting in line at the airport, or see one of these dogs working in the vicinity, remember that your safe journey depends to some extent on the brains and noses of these well-trained canines. Their very presence is a deterrent against possible terrorism.