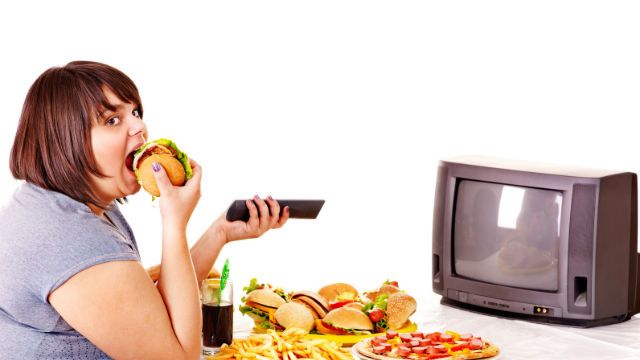 Have you ever paid attention to what kinds of foods you’re eating while enjoying your favorite TV shows? Chances are, the more time you spend watching, TV the greater the likelihood you have unhealthy eating habits.

According to a study by the University of Houston, excessive amounts of TV watching correlated with the consumption of unhealthy foods and misunderstandings about a healthy diet. The primary researcher of the study, professor Temple Northup, wanted to discover what causation might explain this beyond the fact that TV watching is a sedentary activity that encourages snack-eating.

Drawing upon a similar research model for looking at cancer prevention, Northup developed measurements like ‘nutritional knowledge,’ ‘a fatalistic view toward eating well,’ ‘nutritional intake,’ and ‘television and news media usage,’ which he used in his cross-sectional survey of 591 subjects. These ‘fatalistic views’ involved feelings of helplessness and being unable to understand the cause of something or prevent it.

It could be a mindset

In his review of the cancer prevention studies, Northup discovered that when people develop a fatalistic view about cancer, they believe it is too hard to understand how to prevent cancer and have less tendency to avoid risky potential cancer-causing behaviors. Similarly, Northup believes some people develop a fatalistic view about nutritional eating and start to gravitate towards more snack foods. These people may think that eating well is too hard to understand and just give up on it altogether.

According to Northup, “I found people who watch more TV had both a poorer understanding of proper nutrition and a more fatalistic view toward eating well compared to those who watched less TV. In turn, those two items predicted snacking behaviors. It is important to understand how people develop knowledge about nutrition, including examining nutritional messages found within the media.”

Mixed messages in the media

As Northup stated in his report, “after all, on the one hand, heavy users are told to eat a lot of sugary drinks and snacks, while on the other, they are told to avoid those snacks in favor of a variety of other foods. If all messages being presented conflict, it becomes hard to decipher exactly what should be followed.”

While we know that everyone can benefit from healthy diets and exercise, it is particularly important for people with lifestyle-related and diet-related chronic conditions like diabetes, cancer, and cardiovascular disease to get their health under control stat.

We all need to understand that a nutritious diet and healthy lifestyle can prevent illness and improve our quality of life, and TV certainly isn’t doing us any favors.