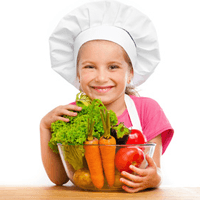 Despite the advice of the U.S. Department of Agriculture to consume more fruits and vegetables–four to five cups per day for adult women and men, according to USDA’s MyPlate–Americans are still falling short. These foods are rich in vitamins, minerals, fiber, antioxidants, and other compounds that help fight disease.

According to a poll conducted by the International Food Information Council Foundation, which included data from 1,057 adults, most Americans say they’ve been trying to increase their fruit and vegetable intake over the past year. Unfortunately, children and adults eat only an average of a little more than one cup of vegetables per day and a little more than one-half cup of fruit per day, according to data from the market research firm, NPD Group.

The data showed that children 2 to 12 and parents are eating more fruits and vegetables, while teens and the elderly are consuming less.