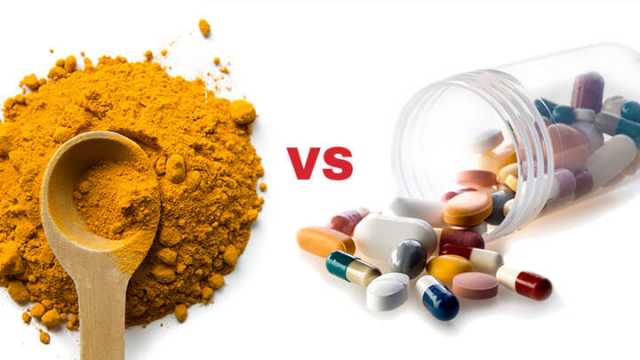 Health trends come and go, but turmeric’s place in the limelight is here to stay. You’ve probably seen it just about everywhere, from golden lattes to DIY face masks. And if you’ve dismissed this ancient Indian spice as just a health fad, it’s time to take a closer look at its wonder ingredient: curcumin. A tablespoon (or two) could be just what the doctor ordered.

The use of turmeric dates back to nearly 4,000 years ago to the Vedic culture in India. Back then it was used primarily as a cooking spice, with some religious significance. Today, it has migrated across the globe for a range of applications, both culinary and medicinal. While there are some skeptics about its medicinal efficacy, there are thousands of peer-reviewed studies to date highlighting turmeric’s versatility in whole-body healing.

Turmeric can improve digestion, control unwanted facial hair, remove dandruff, enhance memory, fade stretch marks and much, much more. Is there anything it can’t do? Maybe, but this beloved Indian spice continues to surge in popularity year after year as the world discovers its numerous health benefits. Google searches for turmeric have increased 300 percent in the last five years, along with other superfoods like coconut oil and apple cider vinegar. So go ahead — jump on the bandwagon.

Let’s think about the modern medical system for a moment, and how it differs from alternative health. Consider this scenario: you’re tired, stressed and you’re eating out all the time. You come down with a nasty infection and head straight to the doctor. They prescribe you antibiotics. Over the course of a week, your meds wipe out the bacteria in your gut, both good and bad. You’re cured of the first infection, but get walloped with a second infection while you’re immune system is down, paving the way for more medications with more side effects. On and on until you’re 100 percent better… a month later.

Now, consider this: All year round you eat organic, whole foods and stay away from junk food. You meditate, you hydrate, you exercise, you get eight hours of sleep a night. You lead a low-stress lifestyle, you supplement your diet with plenty of probiotics and you sprinkle turmeric on many of your recipes. When everyone around you gets an infection, you might get sick. However, because you’ve strengthened your immune system through the seasons, chances are your body will be able to fight off the infection on its own.

In the first scenario, you’ve caused your body unnecessary damage, which takes time and resources to fix. In the second case, you’ve relied on your body’s own faculties to take care of the problem before it strikes. That’s where turmeric fits in. It can be used as part of an overall healthy lifestyle to give your body the support it deserves. Here are ten ways that turmeric can improve your health:

This sunny spice belongs at the top of our list for its inflammation-fighting powers. Chronic inflammation caused by a poor diet and unhealthy lifestyle causes dangerous diseases over the long haul, including cancer, heart disease, type 2 diabetes, arthritis and more. Adding turmeric to your diet is a simple way to add a kick of flavor to your dishes while allowing your body to do what it does best: keep you healthy. Turns out, the active compound in turmeric — curcumin — is on par with over-the-counter anti-inflammatories, without all the harmful side effects.

Yes, a simple spice may really be able to improve your mood. In one study, researchers tested stressed-out lab rats displaying depression-like symptoms along with adrenal issues, caused by a prolonged elevation in stress hormones. Surprisingly, they found that curcumin helped to alleviate negative physiological effects. “These results provide compelling evidence that the behavioral effects of curcumin in chronically stressed animals, and by extension humans, may be related to their modulating effects on the HPA axis and neurotrophin factor expressions,” wrote the authors. That’s fancy talk for curcumin’s powerful impact on the brain.

Over the years, researchers have examined curcumin’s role in treating various forms of cancer. Several studies have found that curcumin can significantly inhibit the development and movement of cancer cells through the body. It does this by reducing the growth of new blood vessels in tumors, called angiogenesis. Curcumin may also contribute to the cancer cell death directly, though more research is needed in this area.

Chronic pain is one of the biggest problems in our country, sending many towards over-the-counter or prescription pain medications. The problem is, they are more dangerous than you might think. For example, acetaminophen, sold under the name Tylenol, is associated with 50 percent of acute liver failure in the states. “Tylenol is responsible for more than 56,000 emergency room visits, 2,600 hospitalizations and an estimated 458 deaths due to acute liver failure each year,” says a study published in Hepatology. Curcumin, on the other hand, may alleviate pain naturally, according to researchers.

Alzheimer’s disease has been linked to low levels of brain-derived neurotrophic factor (BDNF), an important neurologic growth hormone. Several studies have shown that curcumin in turmeric can increase levels of BDNF in the human brain, perhaps causing neurological disorders to delay or even reverse. Additionally, scientists now suspect that curcumin may improve memory and increase cognitive capacity, something we could all use a little more of.

Endothelial dysfunction is a common cause of heart disease. It occurs when the endothelium (the lining on your blood vessels) can no longer regulate blood pressure and clotting. Fortunately, researchers have found that curcumin can help your endothelium by raising nitric oxide availability and reducing oxidative stress, similar to exercise. Improved endothelial function means you have a lower risk of heart disease. Thanks, turmeric!

7. It reduces symptoms of arthritis

In one study, researchers evaluated three groups of rheumatoid arthritis sufferers. They gave one group 500 milligrams of curcumin, another group diclofenac sodium (50 milligrams), and a third group with the combination of the two. They found that the curcumin group had the highest reduction in tenderness and swelling of the joints. “These scores were significantly better than the patients in the diclofenac sodium group. More importantly, curcumin treatment was found to be safe and did not relate with any adverse events,” wrote the study authors.

8. It can alleviate PMS symptoms

A study published in Neuropeptides found that curcumin contains properties that can alleviate PMS symptoms. The researchers conducted a trial on 70 young women. Half of the participants took curcumin for three menstrual cycles, while the other half took a placebo. At the end of the study, researchers discovered that PMS symptoms were “significantly reduced” for the curcumin group.

Researchers have found that curcumin’s anti-inflammatory properties may prove beneficial for the GI tract, perhaps by blocking inflammatory cytokines. In one study, researchers gave patients 360 milligrams of curcumin three or four times a day over the course of three months. At the end of the study, they found that curcumin significantly reduced clinical relapse in patients with IBD. Though the research so far looks promising, more studies are needed to confirm the link.

10. It can treat skin issues

Turmeric may be able to provide therapeutic benefits for your skin health. In one meta-analysis, researchers reviewed eight studies on the topical application of turmeric and its effects on the skin. The skin conditions included acne, alopecia, atopic dermatitis, facial photoaging, oral lichen planus, pruritus, psoriasis, radiodermatitis and vitiligo. Researchers noted “statistically significant improvement” in dermatological issues for the curcumin treatment group in comparison to the control group.

How to take turmeric

Before we discuss how to take turmeric, it’s important to discuss the important relationship between this trusty spice and black pepper. Black pepper’s main compound — piperine — increases curcumin absorption, the active ingredient in turmeric responsible for all the health benefits. In other words, black pepper can help enhance your body’s ability to process and use turmeric for all that it’s good for. These two go together like peanut butter and jelly.

Now, if you’re looking for some ways to incorporate turmeric in the kitchen, try some of these recipes:

If you decide to try supplements, find an all-natural variety of 100 percent turmeric. Check the bottle to be sure, but you can likely take capsules of 400 to 600 milligrams up to three times per day. You can also make a topical paste using turmeric powder and filtered water, say for knee pain. No matter how you take it, just make sure to get some turmeric into your life!