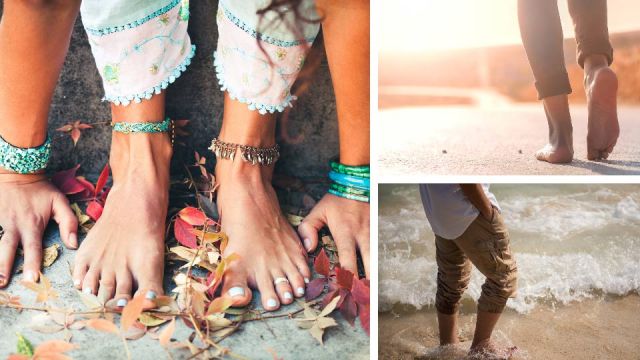 Here’s a question: how much time do you spend with something on your feet each day? Chances are, your feet spend most of their day enclosed in shoes, socks or perhaps a pair of flip flops when the weather gets warmer. And when you do set your feet free, do you gleefully run outside and wriggle your toes in the grass, or walk around on soft, artificial rugs and carpets?

You see, as a nation we’ve become completely disconnected from the world around us. We spend all our times enclosed in cars, offices and houses that cut us off from nature and the Earth that sustains us. And the fact that our feet never seem to touch virgin soils or green grass is preventing us from achieving optimum health.

Today, a growing number of people are recognizing the importance of regularly ditching shoes and socks, and walking or standing on natural ground. This process, known as grounding, earthing or barefoot therapy, has actually received a lot of attention in scientific circles, with a growing body of research proving that grounding really does provide significant health benefits.

In this post, we’ll discuss the theory behind grounding, then dive into some of the many health benefits research has shown grounding can provide.

The premise behind grounding is simple: allowing the body to have direct contact with the earth. This contact can come in many forms, provided that contact is with a natural, undeveloped surface — such as soil, sand or water.

The earth has a mild negative charge, while our bodies build an increasingly positive charge the more time we spend in developed, urban environments. It’s believed that if left unchecked, this positive charge can wreak havoc with our health; an imbalance that can be corrected simply by spending time in direct contact with the earth.

Don’t believe all the hype around grounding? You might be surprised to learn just how many studies have been conducted connecting grounding to a wide range of health benefits. Here are just a few.

A study published in the Journal of Alternative and Complementary Medicine examined the role that grounding exerts in our sleep patterns. Study participants suffering from sleep dysfunction, pain and stress were told to sleep on earth-conductive mattress pads over the course of eight weeks. The results were significant: normalized cortisol profiles, along with improvements in sleep dysfunction, pain and stress in all of the participants.

All from connecting their bodies to the earth.

Chances are, you don’t happen to own an earthing mattress pad. But it stands to reason that the residual benefits from planting your bare tootsies on the ground during the day will help you to sleep a whole lot better a night.

As explained earlier, the premise behind grounding is that every time you walk barefoot on the earth, you’re rebalancing your overly-positive charge. You’ve probably heard the term “grounding” or “grounded” used in electrical applications, and it generally means to stick something conductive (such as a metal rod) into the earth to maintain a constant, balanced electrical charge.

Interestingly, our bodies behave in a similar way to that metal rod, with the high concentration of water in our tissues acting as a giant conductive rod and allowing those health-supporting negative charges to flow up into our core. This has actually been directly measured by scientists, with this 2016 study showing that grounding reduced AC body voltage in healthy subjects by 58 times while simultaneously protecting them against the harmful currents produced by household electrical items.

It’s hard to believe that the simple act of touching your bare feet to the ground could significantly lower any pain you might have, but that’s exactly what the research suggests. In a 2010 study, eight healthy subjects were exposed to exercises that caused muscle soreness in their legs. Over the course of three days, scientists monitored their levels of pain, and determined that by sleeping on grounding mats as they slept at night, all of them had significantly lower levels of pain.

The analgesic (pain-alleviating) effect of grounding is likely due, at least in large part, to the anti-inflammatory effects experienced by people who regularly make direct contact with earth. A paper that examined a range of different case studies of patients suffering from chronic inflammation explained how daily loss of natural grounding creates a shortage of electrons in the human body, resulting in increased free radical activity and subsequent chronic inflammation.

By grounding our bodies to the earth on a daily basis, we’re helping to rebalance our electrical charge and thereby lower markers of inflammation. And chronic inflammation, it just so happens, is one of the leading causes of many diseases.

The health benefits of grounding are so far-reaching that it can even lower your risk of cardiovascular disease. A study published in the Journal of Alternative and Complementary Medicine examined the effects that two hours of grounding could have on the red blood cells of ten healthy individuals. Subjects were grounded with conductive patches on the soles of their feet and palms of their hands, with blood samples taken before and after grounding.

The study found that grounding increased the electrical charge of red blood cells by an average of 2.7, thereby reducing blood viscosity and clumping. Considering clumping is one of the biggest contributors to cardiovascular complications, researchers concluded that “grounding appears to be one of the simplest and yet most profound interventions for helping reduce cardiovascular risk and cardiovascular events.”

The best places to do grounding

While getting your shoes and socks off as much as possible is always a good idea, only certain areas and/or surfaces will actually provide that beneficial energy-rebalancing effect.

The easiest way to get all the benefits of grounding is to simply walk outside in your bare feet and stand on any patch of dirt, rock or water. Make sure the dirt or rock isn’t encased in concrete (like most planter boxes in the city), as this can impede the flow of electrons from within the earth.

To achieve maximum grounding efficiency, your best bet is to go for a swim in (or walk around) a natural body of water. Water is obviously an excellent conductor, meaning every time you swim (or even dip your feet) in it your body is immediately immersed in that gloriously mild negative current. Sand, as it happens, is also a great conductor.

If you don’t have easy access to outdoor sources of grounding, don’t worry — there are options for grounding from within the comfort of your own home or office. Earthing mats can be placed under your feet while you work or watch TV to offset the harmful EMFs electronic devices expose you to, while earthing sheets can be placed on your bed to ensure a restful sleep every night.