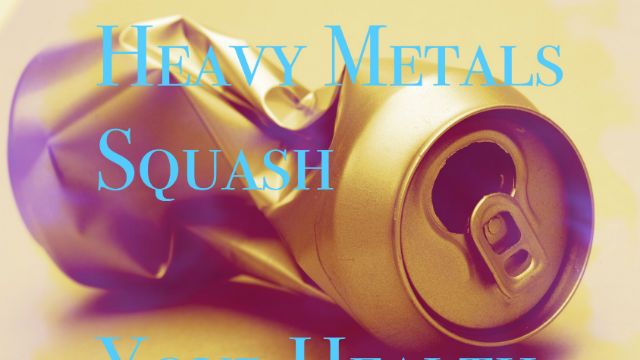 If you are still on the fence about eliminating processed foods from your diet, or choosing organic produce over conventionally-grown varieties, one reason to seriously consider these two healthy options is that they can significantly reduce your exposure to heavy metals.

Heavy metals can be found in a large variety of processed food items, appear in certain pesticides, and may also transfer from the soil to crops if careful soil quality standards are not followed. While these metals are usually found in “trace amounts,” they may accumulate in body tissues and cause harm, especially over the long-term.

The very nature of our modern food processing methods often introduce heavy metals into foods. A 2010 study published in Consumer Reports magazine tested 15 protein powders and protein drinks, mostly purchased in the New York City area. The researchers found cadmium, lead, arsenic and mercury – in some cases all four – in many of the samples tested.

Some of the samples contained a larger concentration of each of these four metals, per serving size, than the limit set by the US Pharmacopeial Convention (USP). This is especially worrying because if a person were to drink more than one serving of these protein drinks, their ingestion of these heavy metals would quickly accumulate.

The following is a look at five of the most common metals found in our food supply.

Arsenic is best known to many of us as the active ingredient in rat poison. It is a metal that naturally occurs in soil and groundwater, and is also used in pesticides and multiple manufacturing processes. In large enough concentrations, arsenic can lead to gastrointestinal symptoms, muscle cramps, hair loss, bloody urine, cancers and even death.

Imported produce can especially be a concern when it comes to arsenic risk, because this metal contaminates the groundwater in many nations. Crops that are treated with arsenic-based pesticides and herbicides can also lead to it accumulating in our bodies, as it can be absorbed by the plants themselves.

In recent years, this dangerous metal has been found in samples of conventionally-raised chicken, non-organic rice and bottled apple juice.

Cadmium is a toxic metal that is leached into the soil through a number of industrial processes, including mining and the manufacture and disposal of metal products. It is also found in cigarette smoke.

High levels of cadmium in the body can interfere with the body’s ability to utilize certain nutrients, which can both compromise the immune system and weaken the musculoskeletal system.

Any type of produce that is grown in soil that is high in cadmium can transfer this metal into your body. Organ meats and shellfish have been found to contain higher amounts than many other foods, and it has been found in processed products including white flour and evaporated milk.

The most commonly-known source of lead poisoning is lead paint, widely used to paint both the exterior and interior of homes built before 1940, and still used to an extent until it was discontinued in the 1970s. However, lead is also found in trace amounts (sometimes more) in our food supply, largely due to processing methods.

Lead is an extremely dangerous metal to consume, especially for children. It can inhibit neurological development and lead to learning disabilities and behavioral problems. In adults, exposure is linked to dementia, and in both adults and children it may cause seizures.

Along with affecting the nervous system, lead can compromise the cardiovascular, digestive, skeletal and reproductive systems, along with harming particular organs, such as the kidneys.

A variety of processed foods, as well as canned foods, may contain traces of lead, some dangerously more than others, depending on practices.

Mercury is a liquid metal that naturally occurs in certain ore deposits, and also enters soil and water through waste runoff from agricultural operations, landfills and manufacturing plants. Mercury can cross the blood-brain barrier, and can lead to immune system and neurological malfunction. It also affects the lungs and kidneys.

The best-known food source of mercury is fish, especially larger fish, as they accumulate more mercury in their systems. Mercury can also enter crops that are grown in contaminated soil.

Aluminum is not classified as a heavy metal, but it is a metal that commonly enters our food. This metal is routinely used in canning, cookware, and various processed food operations. Some symptoms of aluminum poisoning are muscle pain, ulcers, pain in the spleen, appetite loss and convulsions. If exposure is chronic, it may lead to Alzheimer’s disease and Parkinson’s disease.

Aluminum poisoning can be especially dangerous if you are deficient in magnesium.

Besides the obvious aluminum cans, trace amounts (or higher) of aluminum have been found in various processed foods, baked goods, baby formula and some baking powders.

Your best bet for avoiding metals in your food is to eat organic, since this will limit your intake of pesticides and herbicides containing these toxins. Avoiding processed foods, even organic processed foods, is key, as metals may contaminate food via processing methods. 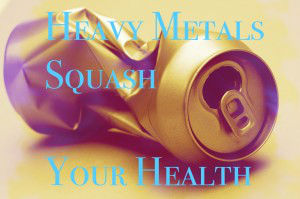 Unfortunately, even organically-grown food may contain some heavy metal content, if the metals are concentrated in the soil. The best way to determine whether the soil your food was grown in is safe is to contact the grower, and enquire about their soil testing practices, especially for heavy metals.

Buying from local farmers you trust who test their soil, or growing your own produce, gives you more control over what it is you are eating.

Though going organic is your best chance at limiting exposure, it is virtually impossible to avoid all exposure to heavy metals. For this reason, check out our article on how to routinely detox your body of heavy metals that may accumulate and compromise your health.