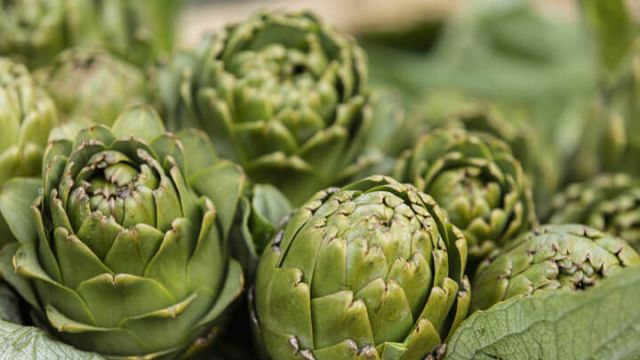 Whether you love them, hate them or have never tried them, artichokes are fascinating. An artichoke is actually a type of flower — an immature bud of a giant thistle, to be more exact. Even if you consider yourself an artichoke expert, there may be some things you’d be surprised to learn about this green delicacy.

Scientifically, the artichoke plant is called Cynara cardunculus, variety scolymus. The buds that we eat are often referred to as “globe artichokes” to distinguish them from other plants, such as a Jerusalem artichoke, which is an entirely different food. As the artichoke flower matures, it becomes less and less edible, so timing is important when cultivating it. When it is picked at just the right time and prepared correctly, the artichoke is a delicious vegetable with a number of health benefits.

Read on to discover nine things you may have never known about artichokes. 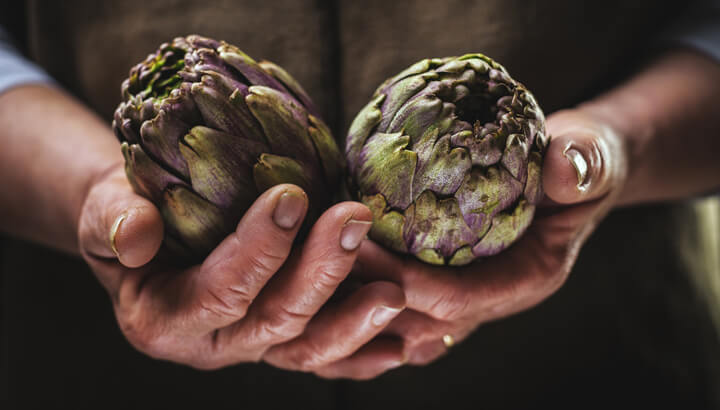 It’s hard to believe that people have been eating immature thistles for thousands of years, but it’s true. The use of artichoke in traditional medicinal remedies dates back to the fourth century BCE when their use was explored by Greek naturalist and philosopher Theophrastus. It is thought that both artichokes and cardoons are descendants of the wild cardoon, which is presumed to be native to Sicily, Italy and northern Africa.

The use of artichokes in medicines is mentioned in ancient Greek and Roman writings. According to Pliny the Elder, a famous Roman author and philosopher, artichokes could freshen breath, cure baldness, reinforce the stomach and make it more likely for couples to conceive boys. The artichoke was also traditionally used as a diuretic, an aphrodisiac and to treat a variety of liver conditions.

After the fall of the Roman empire, artichokes were no longer commonly eaten in the region. They were, however, still used as food and medicine by Arabic people, who eventually introduced them to Spain. Their cultivation spread from there, and by the 18th century, they were growing in the colonies of the New World.

2. The artichoke is immortalized in Greek mythology

Speaking of ancient Greeks, there is a very interesting myth which describes how artichokes came into existence. According to the myth, Zeus, the leader of the Greek gods, was visiting Poseidon, his brother and god of the sea. During this visit, he happened to gaze upon a beautiful woman named Cynara. Zeus made Cynara his mistress, transformed her into a goddess and took her back to Mount Olympus to live among the gods.

However, in time, Cynara became lonely and missed her mother, so she began taking secret trips back to Earth to visit her. Zeus found out about Cynara’s secret trips, became angry, exiled her from Mount Olympus and transformed her into an artichoke. Thus the first artichoke appeared in the world.

It is possible that this myth is to thank, at least in part, for the artichoke’s ancient reputation as an aphrodisiac.

The ancient use of artichokes to remedy liver conditions has recently been found to have significant validity. These veggies contain cynarine, a phytonutrient which helps the liver to produce bile. They also contain a flavonoid called silymarin, which protects liver cells and cell membranes. Together, these compounds may help to regenerate cells within the liver.

Research has also found that artichokes may help to protect the liver against toxicity. A 2014 study published in the journal Pharmaceutical Biology tested the ability of artichoke leaf extract to protect rats against liver injury. In this study, the drug paracetamol was used to induce injury in the liver. On their experiment, the researchers wrote:

It’s also possible that artichokes may help protect the liver from other types of toxicity, such as from pollutants, processed foods and alcohol.

4. Chewing on artichoke leaves can help cure a hangover

Because of their liver-protecting and cleansing abilities, artichokes may help to soothe a hangover by clearing the blood of alcohol-related toxins. One traditional remedy involves chewing on artichoke leaves as soon as you wake up from a night of a bit too much debauchery. If you try this, just make sure to cut off the sharp, pointy parts of the leaves! 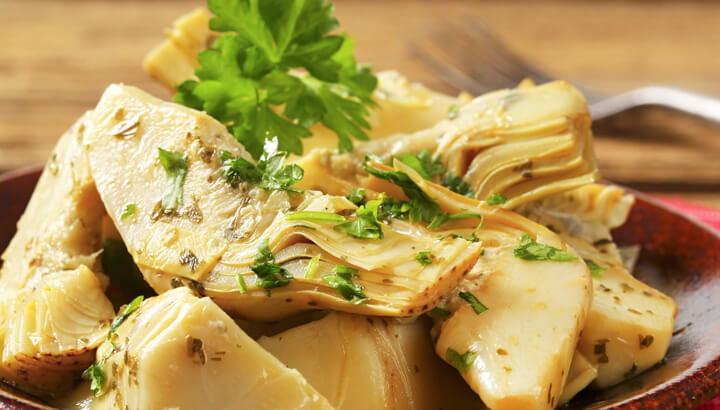 Another ancient use of artichokes is for the remedy of digestive disorders of various kinds. Today, this use is supported by numerous nutritionists, as artichokes are thought to help relieve irritable bowel syndrome and stimulate the gallbladder, an organ that is necessary for the proper digestion of fats. Artichokes are high in fiber, which is crucial to a smoothly functioning digestive system.

Research has also found that because of the high fiber content of artichokes, they are great veggies for carrying probiotic strains into the gut. For a 2006 study published in the journal Applied and Environmental Microbiology, researchers applied probiotic bacteria to artichokes and tested their adherence and pathway through the gut. On their results, the study authors wrote:

“The ability of potentially probiotic strains of Lactobacillus plantarum and Lactobacillus paracasei to survive on artichokes for at least 90 days was shown. The anchorage of bacterial strains to artichokes improved their survival in simulated gastrointestinal digestion. L. paracasei IMPC2.1 was further used in an artichoke human feeding study involving four volunteers, and it was shown that the organism could be recovered from stools.”

5. Artichokes are great for your heart

Thanks to both their high fiber content and their cynarine content, artichokes are an extremely heart-healthy food. Fiber is essential to the health of the cardiovascular system, and the cynarine in artichokes is linked to lowering LDL (“bad”) cholesterol and raising HDL (“good”) cholesterol levels.

“ALE consumption resulted in a modest but favorable statistically significant difference in total cholesterol after 12 weeks.”

A body of research has linked artichokes to significant cancer-fighting potential. One study, performed at the University of Illinois in 2013, concentrated on the flavonoid apigenin, which is found in artichokes. The research found that this flavonoid worked in cohesion with chemotherapy in destroying pancreatic cancer cells in a lab setting.

On the study, Dr. Elvira de Mejia, a professor of food chemistry and food toxicology at the University of Illinois, explained:

“Apigenin alone induced cell death in two aggressive human pancreatic cancer cell lines. But we received the best results when we pre-treated cancer cells with apigenin for 24 hours, then applied the chemotherapeutic drug gemcitabine for 36 hours.”

Another study, published in 2013 in the journal Industrial Crops and Products, tested the effects of artichoke infusion on liver tumors (hepatocellular carcinoma). Results showed that the infusion “presented antitumor activity.” However, this infusion was found to have “toxicity for normal cells at a higher concentration,” so more research needs to be done.

Artichokes have some pretty amazing detoxifying properties. One of these is the potential to protect the liver against lead poisoning. The authors of a 2012 study published in the journal Pharmaceutical Biology wrote:

“Artichoke, Cynara scolymus L. (Asteraceae), has many natural antioxidants and multiple pharmacological actions. Recent studies have shown that it has antitoxic activity.”

For their study, researchers tested the effects of artichoke extract on rats that had been fed lead as part of their diets. The study went on for six weeks. On their results, the study authors wrote:

“These results clearly show that the artichoke extract in lead-poisoned rats has suitable chelating properties for the reduction of blood lead levels.”

8. You can eat the leaves

A lot of people who enjoy artichokes only eat the hearts. They are the most readily-available part and the easiest to access. However, there is a lot of yummy flesh at the base of each artichoke leaf that goes to waste if you don’t eat it.

To prepare the whole vegetable, buy fresh, organic artichokes with stems that don’t look dried out. You can boil or steam your artichoke, although steaming preserves the most flavor. You’ll know it is done when the leaves pull off of the artichoke easily and the flesh is tender.

After the artichoke is steamed, remove it from the steamer, allow it to cool and use a pair of kitchen shears to trim the pointy, sharp tips off of each leaf. You can then pull off each of the leaves, dip the bottom in some grass-fed butter or some organic sour cream mixed with dill, and eat the flesh right off of the leaf.

Alternately, you could eat them as the ancient Romans did: marinated in vinegar and honey, and seasoned with a bit of cumin. Yum!

Artichokes are high in a wide range of vitamins and minerals, including vitamins A, C, D and E, and the minerals calcium, iron, potassium, phosphorus and zinc. One quick note, however: if you have liver disease or gallbladder disease, be sure to ask your doctor before making artichokes a regular part of your diet.

What’s your favorite way to enjoy the magnificent, ancient artichoke?