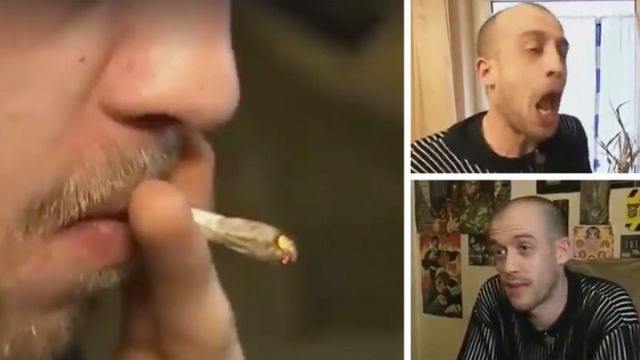 Billy Wieschollek experiences involuntary movements, physical tics and muscle twitches that are so disabling that he can barely eat breakfast or make a pot of coffee in the morning. Since birth, the young German has been suffering from a very severe form of Tourette syndrome, which is a neurodevelopmental condition that causes strange repetitive motions, verbal outbursts and spasm-like behaviors.

Trying to cope with the symptoms of this disorder are a monumental ordeal that taxes every ounce of energy that Wieschollek has. Any medication that would alleviate or suppress the tics and herky-jerky bodily motions he has would be a tremendous relief. Unfortunately, conventional pharmaceuticals and traditional therapies have failed to help Wieschollek.

See what happens when he smokes marijuana

There is one substance, however, that helps him regain a sense of normalcy. About 20 minutes after smoking a joint (as you can see from the amazing video below) the symptoms associated with Wieschollek’s Tourette syndrome virtually disappear.

WATCH!Billy demonstrates and bravely tells how he can do almost nothing until he smokes cannabis.For more information about Cannabis and Tourette visit: http://www.tikunolam.com/article.php?id=1055>>>Share#HealingtheWorld

The transformation Wieschollek undergoes is nothing short of miraculous. Beforehand, he was convulsed by involuntary movements and trying to speak took enormous effort. But after some medicinal marijuana, he can speak fluently and his hyperactivity is gone.

Scientists are still uncertain about the causes and underlying biological mechanisms of Tourette’s, but researchers believe that certain metabolic processes in the brain governing muscle control are being disrupted.

At present, there is no known cure and most patients must try a variety of medications before they find one that helps address their symptoms. Most of these drugs have significant side effects.

Anecdotal reports and a growing body of evidence support the view that medical marijuana may help may patients with Tourette’s.

This is not altogether surprising, recently researchers have been discovering that cannabis-based compounds appear to be helpful for a wide range of neurological conditions including epilepsy, autism and Parkinson’s. For instance, a study conducted in 2003 found that marijuana suppressed symptoms associated with Tourette syndrome.

This has led many physicians to begin recommending it to patients with Tourette’s. Dr. Kirsten Müller-Vahl says, “There is anecdotal evidence to suggest that the consumption of marijuana clearly and continuously benefits Tourette patients. There is also a strong suggestion that the plant Cannabis is more effective than synthetic THC, and that patients taking the mixture experience fewer unpleasant side effects.”

Dr. Dustin Sulak agrees by saying that “we know it’s the safest and one of the most effective treatments for this condition [Tourette Syndrome]. I want to help patients use the most appropriate treatment legally and I want to protect physicians who recommend Cannabis for Tourette’s.”

As you might expect, research into medical marijuana is still in its infancy and scientists still don’t know why cannabis is so effective when it comes to treating neurological conditions. However, numerous laboratory studies on mice have shown that:

Cannabinoids on the cutting edge of neurological medications?

It’s not surprising, then, pharmaceutical companies are beginning to look towards cannabinoid-type compounds as they try to develop the next generation of neurological medicines.

For instance, Catalent Pharma Solutions of New Jersey is teaming up with the Israeli biotech firm Therapix Biosciences, which is a leader when it comes to medical marijuana research. The two hope to develop a compound called THX-TS01, which combines two cannabinoids (Tetrahydrocannabinol and Palmitoylethanolamide), which would provide extended relief for patients suffering from Tourette’s.

In the meantime, the evidence supporting medical marijuana’s efficacy for Tourette’s continue to mount. A study conducted in 2017 at the University of Toronto found that cannabis relieves tics and convulsions in patients with Tourette’s, but without any adverse effects.