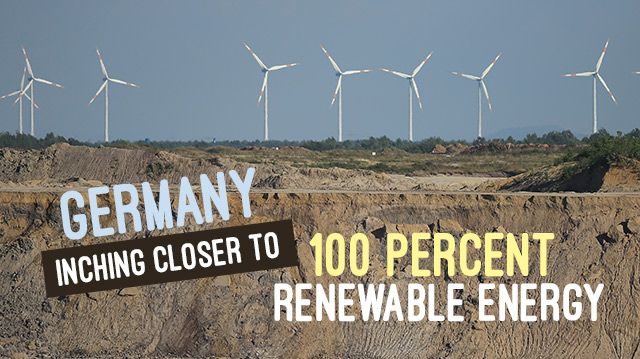 On May 8, 2016, Germany’s renewable energy sector hit a new milestone as sunny and windy conditions allowed for 87 percent of the country’s energy needs to be met with renewables.

Unfortunately, nuclear and coal plants, which are not designed to be shut on and off in response to the fluxes in renewable energy production, kept pumping out energy as well, leading to negative energy prices that actually ended up paying consumers.

Still, the groundbreaking day for renewable energy production marks a big achievement in the industry.

The big day for renewables in Germany is yet another peak moment for a country that has placed great emphasis on renewable energy and environmentally focused policies.

Germany is Europe’s top renewable energy producer and globally ranks only below the much larger countries of China, USA, Brazil and Canada.  In 2015, 32.5 percent of Germany’s electricity came from renewable sources, compared to just 13 percent in the United States.

In 2014, Germany was the worldwide leader in solar energy production, though it is expected that China will overtake them in 2016. Germany’s success in solar power production is notable, considering the country only gets as much direct sunlight per year as Alaska does, yet still produces five times more solar power than all of the United States.

The fact that Germany is able to produce so much solar energy despite having such poor conditions for its generation goes to show that good government policies can outweigh geographic circumstances in terms of renewable energy production.

Transitioning away from fossil fuel–based economies to ones based on greenhouse gas emission–free, renewable energy is quite possibly the most important undertaking our global society has ever been tasked with. And right now it appears as though Germany is the most valuable player on our team.

How has Europe’s largest economy achieved such growth in fossil fuel–free development? Numerous government policies have put them on this path.

Introduced in 1999, Germany’s Ecological Tax Reform has a very simple, yet effective philosophy behind it: Tax “bad” things and use the money to fund “good” things.  It should be noted that what is “good” and what is “bad” has been a hotly debated topic since the invention of both topics and debating.

In this case, however, Germany placed a tax on petroleum, which currently brings in 65 cents of tax revenue per liter of gasoline.

Some of the revenue collected through the energy tax is used to support environmentally friendly industries or practices, but most is actually used to lower the tax on employee payroll, allowing German labor to thrive.

The act originally guaranteed investors a fixed feed-in tariff price over the course of a 20-year contract, but has since been modified to guarantee above market value or premium market prices for renewable energy being fed into the country’s power grid.

Importantly these prices are not paid out in the form of government subsidies but are incorporated into consumers’ energy prices.

This act has served as a model for other countries wishing to bolster their renewable energy sector, such as the province of Ontario in Canada, which introduced its Green Energy Act in 2009 and has since phased out the use of coal in the province completely.

Introduced in 2009, the German Renewable Energies Heat Act requires that all new buildings have to meet a percentage of their space and water heating needs through renewable energy. What percentage that has to be varies based on the source of renewable energy, such as solar, biomass or geothermal. The goal of the act is to achieve 14 percent of energy used for heating and cooling of buildings by 2020.

This act, which went into effect in 2002, sets minimum standards for energy efficiency in new buildings as well as newly renovated buildings.

While it is great to see that under certain conditions renewable energy can meet a large energy demand, if we are not able to develop efficient ways to store energy produced from renewable sources, we will still have to rely on energies such as coal and nuclear during non-peak periods for wind and solar.

Don’t worry, though, some of Germany’s best minds are working on the storage issue as well.

The producers of Mercedes-Benz cars have recently begun selling battery-based energy storage units for residential homes. Now homes with solar panels will be able to store some of the excess energy they produce during peak periods and use it during low periods.  These storage units were originally designed for Mercedes’ line of vehicles, but some outside-of-the-box thinkers in the company realized another market they could sell their product to.

As we push forward toward the clean energy boom, energy storage is the next big obstacle we need to overcome, and making energy storage available for residential renewable energy projects is an important step in that process — and one we can once again thank the Germans for.

Often those who argue against environmentally focused government policies do so because they believe such policies will hinder economic development, but the strong German economy that co-exists with its strong environmental policies goes a long way to dispelling this myth.

Germany is the fourth-largest economy in the word and the strongest in all of Europe. Germany has been able to accomplish this while still placing great emphasis on transitioning away from fossil fuels — something that should serve as a model for countries all over the world.

Many of us usually wait until October to mimic the Germans, but considering the strength of their economy, and the rate at which they are moving to a 100 percent renewable energy grid, we might want to think about making every month a little like Oktoberfest.