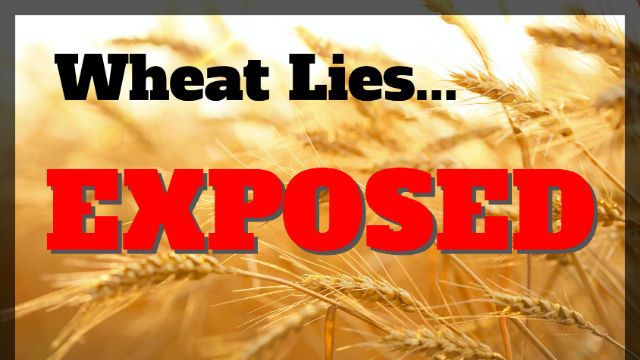 When it comes to whole wheat, we have all been lied to. This ingredient appears next to “heart healthy” labels all over boxed cereals and other wheat-based processed foods, whole grains still comprise the largest section of the Food Pyramid, and wheat is undoubtedly America’s favorite grain.

However, what is relying on whole wheat as a dietary staple actually doing to our bodies? According to cardiologist Dr. William Davis, author of the famous book Wheat Belly, wheat is “the perfect chronic poison.” If you’re reading this after dining on wheat throughout the day, you may very well be on a ‘bread high’ right now.

The following are a few reasons why whole wheat isn’t nearly as healthy as it’s hyped up to be – and can actually be dangerous.

While refined flour is indeed nothing but a bleached, empty carbohydrate, whole wheat flour isn’t actually that much better. While it does start out harboring some important nutrients, wheat seeds are often cross-bred with industrial chemicals and doused in pesticides.

The mature wheat is then often sprayed with pesticides again, then dried at such high heats that the proteins denature, and the nutritional value is largely zapped. The flour that results from this process is nothing like the wheat enjoyed by our ancestors – and it is definitely not good for us.

Lie: If you don’t have celiac disease, you should have no problem with wheat.

Many people are told that if they’re not part of the one percent of the population which suffers from celiac disease, they should have no issues with wheat in their diets. This, unfortunately, is far from the truth.

While individuals with celiac disease face the most danger from wheat and other gluten-containing grains, as gluten can lead to severe inflammation and damage to the small intestine resulting in nutritional deficiency, the rest of us are not immune.

Up to 30 percent of people in the world are estimated to have a sensitivity to gluten, in varying degrees. As medical tests for gluten sensitivity are often unreliable, it can be difficult to diagnose. It is often mistaken for a digestive disorder such as irritable bowel syndrome (IBS), or generalized fatigue.

On top of that, wheat has been linked to system-wide inflammation, as well as to neurotoxic properties. The gliadin found in wheat (it is part of the gluten protein) has been associated with worsening neurological and behavioral disorders, including bipolar disorder and ADHD.

Lie: If you want to lose weight, whole wheat is ok – just cut the saturated fats.

America’s expanding waistlines and rising heart disease rates have been long blamed on saturated fat consumption – until recently. We recently reported (https://www.thealternativedaily.com/saturated-fat-bashing-finally-coming-end/) on a review of 72 studies involving over 600,000 people, which concluded that there was no link between saturated fats and heart disease.

The study’s lead author, Dr. Rajiv Chowdhury, concluded, “it’s not saturated fat we should worry about. It’s the high-carb or sugary diet that should be the focus of dietary guidelines.”

In fact, it’s been found that eating wheat can raise blood sugar levels just as much as table sugar. Wheat contains a complex carbohydrate known as Amylopectin A. As this carbohydrate is quickly digestible, it causes a surge in blood sugar when consumed.

This leads to many of the same effects as sugar consumption, including insulin resistance, type 2 diabetes, weight gain and belly fat, not to mention raising your risk of a number of chronic illnesses.

The gliadin portion of the gluten protein has been found to have highly addictive properties. It has actually been found to simulate the effects of opiates on brain receptors. This creates cravings for more and more gluten, making wheat the perfect darling of food corporations, as they can create repeat customers simply by including wheat in their products.

The presence of gliadin in wheat also fuels the obesity epidemic, as people keep coming back for more, and wheat’s dangerous effects keep compounding.

Many gluten-free breads, crackers and other grain products contain corn starch, tapioca starch, rice starch and/or potato starch. These foods have been found to spike blood sugar even higher than the Amylopectin A found in wheat. Therefore, foods that contain these starches, even if they’re gluten-free, are not a healthy alternative.

If you love bread too much to give it up – you don’t have to. Just avoid processed and packaged varieties, and make your own delicious, gluten-free loaves. For a simple recipe to get you started, check out this great bread: