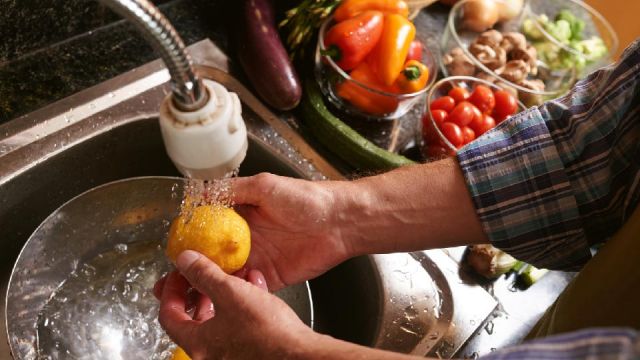 A full 70 percent of traditionally grown produce from shops, even after being carefully washed or peeled, contain pesticide residues. The Environmental Working Group (EWG) released its study into food pesticide contamination recently, and it concluded that the amount of pesticide residue found varies significantly among the various fruits and vegetables. It called the worst foods the “Dirty Dozen” and those with next to no pesticides the “Clean Fifteen.”

Pesticides on produce have been found to negatively impact reproductive health of both men and women. Pesticides are also often carcinogens and have been associated with learning delays in young children. Children with higher amounts of organophosphate and pyrethroid pesticides in their bodies have a higher chance of being diagnosed with ADHD. After farm workers, young children are at the greatest risk of being harmed by pesticide consumption, as their metabolism is different and the pesticides tend to stay in their body longer. So, when buying (or even growing) organic vegetables isn’t an option, keep this list in mind when choosing what you want to eat.

The produce found to have the most pesticide residue, in order from the highest, is:

The first six items on the list were found to have residue 98 percent of the time, and one sample of strawberries had 20 different pesticides, while spinach had the most residue by weight. The EWG also thought it was pertinent to point out that while hot peppers don’t make the dirty dozen list, they have been found to be contaminated with insecticides that are toxic for the nervous system.

The produce least likely to have any pesticide residue includes:

Avocados and sweet corn both had less than one percent likelihood, while the other produce listed had a maximum one in five chance of having pesticides.

If you’d like more information on other fruit and vegetables and just where they stand, you can check out this thorough report by Consumer Reports (jump to page 34). According to this table, green beans are also very high risk, while asparagus and eggplant are on the safe side.

And while the UK sources its produce from different countries or regions to the U.S. — and so not all the data that applies there would also apply in the U.S. — the Pesticide Action Network in the UK has also found that oats and wheat have high pesticide occurrence rates. In the UK, oranges, lemons, limes and strawberries are the riskiest fruits, while vegetables tend to be fairly low risk (pre-packed salad leaves being the worst culprits in that category).

Tips for getting rid of pesticide residues

Cooking food is one way to significantly diminish pesticide levels. For those who can’t buy organic hot peppers, the EWG recommends only eating the cooked versions of the vegetable.

In other cases, a cold water rinse and scrub will remove around 75 percent of residues. The rest tend to be inside the produce. Be sure to get the hard-to-reach crevices, and potatoes and carrots can be washed using a scrubbing brush. If you were planning to peel them, then scrubbing can do that for you at the same time.

Alternatively, soak your vegetables in salt water or vinegar, for at least 20 minutes. At the end, be sure to wash off the vinegar or salt water with cold water, and you’re done.

Finally, you can also buy or make your own anti-pesticide spray. To make your own, mix lemon juice, vinegar and water and use a spray bottle to cover the produce all over before you eat it.

Organic food can be expensive or inconvenient to buy, and not everyone has the green thumb required to grow their own (or the space to grow a lot). Alternative Daily recommends choosing the worst five fruits and vegetables, and at least trying to go organic with those. Considering not only pesticide levels, but how easy the pesticides are to wash off,  Alternative Daily suggests at least buying organic apples, strawberries, celery, sweet bell peppers and peaches.

Apart from fruit and vegetables, meat — especially fatty meat — tends to also contain pesticides. Pork fat and beef fat tend to be the worst, and full of suspected hormone disruptors and developmental toxins. In fact, meats tend to contain more pesticides than plant foods, as the animals consume crop pesticides through their own food. Considering the other abuse that goes into non-organic meat (artificial growth hormones and so on), it’s worth aiming for organic meat if you can.

Will you continue to buy conventionally grown strawberries, apples and peppers? Do you think the risk is worth the convenience? Let us know in the comments!