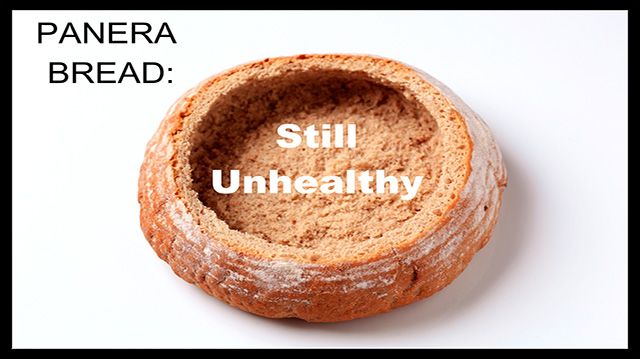 The consumer battle for food transparency and real ingredients is picking up speed! The latest good news? Panera Bread, which operates just under 2,000 chains across the US and Canada, has revealed a list of 150 additive ingredients which it will reportedly no longer use in its foods, starting in 2016.

This is most certainly a leap in the right direction—the growing public awareness of the fact that artificial additives do not belong on our plates, and the subsequent demand for real foods, is huge. However, there is still a glaring fault in our outlook on the situation.

Even without the fake ingredients, Panera Bread will not be necessarily serving healthy foods—though they may masquerade as healthy because of what they do not contain, rather than what they do. The problem this presents is that many people may assume all of what Panera serves is healthy, when this may not be the case.

Panera’s decision to eliminate certain additives was mentioned by the company last year, as we reported. Now, however, an official “No No List” has been released. Some of the additives on the list include high fructose corn syrup, artificial trans fat, artificial colors (including Caramel Color IV), artificial flavors, autolyzed yeast extract (often a fancy term for monosodium glutamate, or MSG), azodicarbonamide (the ‘shoe rubber chemical’) and many preservatives.

According to Panera spokespeople, there will also be a focus on making salad dressings “clean”—they are now to be made without artificial colorings or flavorings.

The additives on this list are still FDA-approved, and the fact that Panera is removing them voluntarily speaks to the high demand to remove them from our food supply. According to Panera chief executive, Ron Shaich, “We’re trying to draw a line in the sand in the industry so that consumers have an easy way to know what’s in the food they buy.”

In fact, many large corporations have been attempting to draw similar “lines in the sand.” Chipotle is now GMO-free—at least as far as their foods are concerned. Hershey’s has announced the end of high fructose corn syrup, and Kraft is reportedly going back to using real spices in its Mac & Cheese products. Many other corporations are making changes along these lines, as well. These changing winds are highly encouraging. 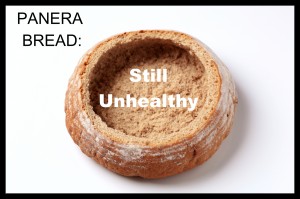 However, even without the GMOs, is a meal at Chipotle a healthy choice? If it’s filled with white flour, sugar, and refined salt, we’re gonna say no. Is a box of Kraft Mac & Cheese a healthy dinner just because it now uses real spices? Judging by the mass production of the product, where contamination is a constant possibility, and the additives still in the mix (on top of the white flour and sugar), the answer is obvious.

Panera, even when it stops using the additives, will still be using wheat flour and sugar in its breads. As we have reported, both wheat and sugar  have been linked to diabetes, depression, obesity, and inflammation, which may be at the root of many chronic conditions. Both of these substances have also been found by a body of research to be highly addictive.

Besides that, there are over 450 ingredients currently used in the preparation of Panera’s foods. Even if we subtract 150, that’s 300 ingredients that remain—and we bet they’re not all whole, natural, real foods, unfortunately.

While it’s wonderful that we are demanding more from our restaurants and food suppliers—and we’re not saying that transparency isn’t crucially important—our nation has to switch its mindset to avoiding processed and prepared foods in general. Only when we choose quality ingredients and cook them ourselves with care can we responsibly assure the integrity and safety of our food—and that’s a worthwhile mission to uphold.