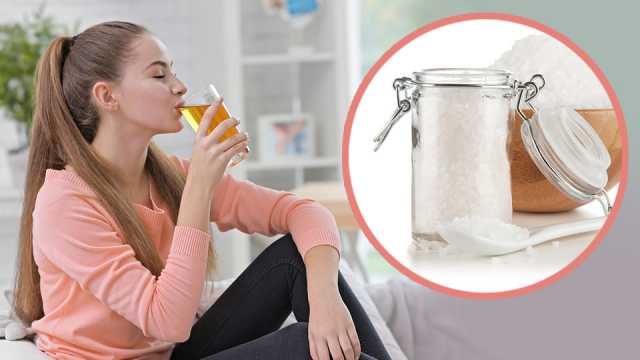 Regular readers of The Alternative Daily will know that we’re a little bit loco about apple cider vinegar. After learning about its many therapeutic powers, I’ve personally made it a goal of mine to knock back at least a tablespoon of apple cider vinegar per day.

Not by itself, of course! One of the most powerful health tonics you can concoct is to simply mix a tablespoon of raw apple cider vinegar in a glass of room-temperature water. I drink this either first thing in the morning, or if I ever come down with an upset stomach — it clears that right up!

But beyond this tonic’s amazing ability to quell a troublesome stomach, there’s plenty more goodness it can bring into your life. A simple tonic of apple cider vinegar (ACV) and water can help to thin respiratory mucus and alleviate congestion, ease a sore throat, help to repopulate a malnourished gut microbiome, raise your body’s pH and lower inflammation. If I put my mind to it, I could probably come up with plenty more reasons why you’ve got to get a little ACV tonic in your life, but that’s probably enough to get you reaching for the nearest bottle!

But what if you could make your daily ACV tonic even more powerful, simply by adding an ingredient that you already use on a daily basis? Well, you can: with a liberal sprinkle of salt.

But not just any old table salt: make sure you’re adding untreated sea salt to your ACV tonic for best results. I know what you’re thinking, “I thought that salt is bad for your health?” Well, that’s only true if you’re using nasty, chemical-treated table salt which has been so overprocessed that it no longer bears any resemblance to its original form.

The body has no idea what to do with table salt, as it’s devoid of most of the original trace minerals that are critical to our health and well-being. Sea salt, in particular Celtic sea salt, is quite the opposite. It has the power to nourish your cells from the inside out and promote optimum health.

And by adding a healthy sprinkle of this life-giving sea salt to your daily ACV tonic, you’ll be elevating its therapeutic powers tenfold. Here’s why.

Unlike table salt, sea salt is still absolutely brimming with trace minerals, with estimates ranging from 60 to over 80 your average grain of sea salt. With diminishing nutrient richness in the soils where most of the world’s crops are grown, it’s more important than ever to replenish our stocks of trace minerals through natural sources like sea salt. Because sea salt is simply sun-dried salt water, all the trace minerals present in the salt water remain behind.

For this reason, slipping anything from a pinch to half a teaspoon of sea salt into your morning ACV tonic can help to replenish the trace minerals that were lost to your body through your urine.

Ever heard of electrolytes? You probably only thought they lived in bottles of Gatorade and craftily-marketed sports drinks. Well, it turns out that these artificial beverages are only really cheap knockoffs of the greatest electrolyte of them all: sodium! Sodium not only helps the body to retain water, it also works synergistically with potassium to ensure you have balanced fluid levels in your body.

I always chortle to myself whenever I see people buying bottles of Gatorade. If you need to rehydrate, why not just mix a teaspoon of sea salt into a glass of warm water? It’s cheaper and much healthier!

Better yet, mix that sea salt into your ACV tonic. I do this whenever I’m planning on doing a particularly sweaty workout or as an early-morning rehydrator as soon as I wake up. Works a charm!

Believe it or not, salt actually helps you digest your food more efficiently. With more sodium chloride in the blood, the digestive enzymes are able to produce a greater amount of hydrochloric acid, which in turn aids in the rapid breakdown and utilization of the proteins, carbohydrates and fats in the foods we eat. So how do you get more sodium chloride in your blood? With sea salt, of course!

If you have low stomach acid, are suffering from constant indigestion after eating, or have an embarrassing amount of gas, slipping some untreated sea salt into your ACV tonic might be just the thing.

I used to suffer from cramps on a regular basis, particularly during the night. I’d often wake in sudden agony, with either my foot or calf rigid and lumpy as a cramp set it. It didn’t make for a very nice wake-up, but I was at a loss as to why this was happening so regularly.

Then I did some research and found out that people who suffer from cramps are often deficient in sodium. Studies show that athletes can sweat so much that their sodium levels drop to dangerous levels, causing the nerve signals associated with certain muscles to go haywire. This is when cramps set in.

But even if you don’t sweat a lot (you should, at least a few times a week!), you may still be sodium deficient if you don’t get enough salt in your diet. Sea salt is an optimum source of sodium, helping to restore the right balance in your blood and protecting you against future episodes of cramps. Just another reason why adding sea salt to your ACV tonic is a very good idea indeed.

You’ve probably heard by now about the theory that the more acidic our blood is, the higher our risk of infection and disease. Incidentally, that’s one of the reasons why many people drink apple cider vinegar — it actually increases the pH of the body once it reaches the stomach, thereby promoting a healthy alkalizing effect.

Sea salt works in much the same way, helping to facilitate the excretion of excess acids through urination. Thus with a combination of apple cider vinegar and sea salt in your daily health tonic, you’re guaranteeing your continued well-being throughout the day.