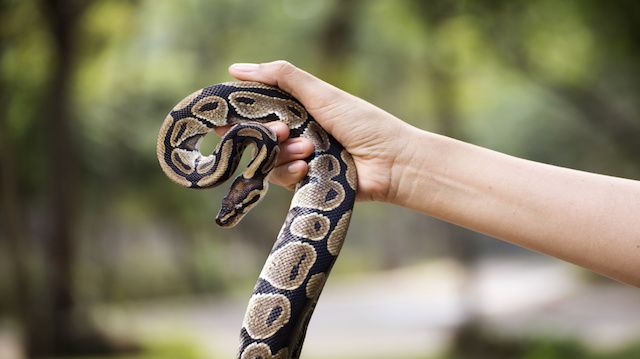 You may find snakes creepy or just downright terrifying, but they’re actually pretty darn cool when you look at their stats. Here are 21 true snake facts that may just make you want to rethink your classification of them as being just “gross and slithery.”

Some snakes have extra appendages

Okay, so maybe we’re not starting off on the best fact to help you get over your aversion to snakes, but this is still interesting! Some snakes, such as the tentacled sea snake, have what science considers to be actual appendages. There are plenty of other species of snakes with appendages, including vipers, which have horns, and burrowing asps, which have small saberteeth that it can move independently to maneuver food into its mouth.

The smallest snake is a mere 3.9 inches in length

Here’s a much cuter fact about snakes: The smallest species in the world is the thread snake, which measures in at a miniscule 3.9 inches long at its largest.

The largest snake is 30 feet long

And we’re back to creepy again. The reticulated python can grow up to 30 feet in length, making it by far the largest snake in the world.

Not all species hatch from eggs

You may be mildly surprised to learn that only 70 percent of snakes lay eggs. The rest use live birth, as eggs can be a liability in colder climates, where most of these kinds of snakes are located.

Sorry, but you knew a death-related statistic was coming. It’s no reason to hate on them — most of these deaths were probably due to the snake getting stepped on, kicked or cornered. I’m sure they had their reasons.

There’s one particular island in Brazil where civilians are actually banned from visiting due to the freakishly high concentration of snakes that live there. Estimates place this concentration at a leg-shaking five snakes per square meter.

Snakes can eat animals almost twice as big as themselves

Using their ability to unhinge their jaws, snakes can eat animals up to 75 to 100 percent of their own mass. If they get greedy and eat something that’s just too darn big, they can literally burst open. Tasty.

Snakes can have two heads

These two heads don’t always get along and may even fight each other over food. Seems a little counterproductive, considering they’re attached to the same animal.

You can walk into a restaurant in Vietnam and order something called a “cobra blood wine” from the menu. The waiter will proceed to grab a live cobra, kill it in front of you, drain the blood into a shot glass containing rice wine and garnish it with the still-warm heart of the cobra. Not exactly the most humane-sounding practice in the world.

When rattlesnakes fight each other, they actually refrain from using their fangs to poison the other snake. Kind of like an unspoken rule of dueling.

There’s a lot of variation in pupil shapes between snake species, with some being slitted while other are perfectly round like mammals. These pupil shapes correspond to different hunting techniques.

There are approximately 3,000 species of snakes

That’s a lot of snakes! Of these species, only 700 are venomous, with only 200 of these being of any real danger to your life.

Snakes don’t have any eyelids

Snakes have a protective film over their eyes, which means they don’t need eyelids. They also can’t move their eyes.

One Florida boy reportedly needed close to 80 vials, which totals a whopping $1.6 million in venom.

The inland taipan is the most venomous snake in the world

Most people think that a certain sea snake holds this title, but in actual fact it’s the inland taipan snake of Australia, which is the most venomous.

Snakes are found on every continent except one

Yep, you guessed it: That continent is Antarctica. It’s not exactly the best habitat for a snake, as it happens.

All snakes are carnivores

While many animal groups have a range of species with different diet types, such as omnivores and herbivores, snakes have just one: carnivore. They all eat meat and only meat.

The top 10 deadliest snakes are in Australia

Australia’s deadly reputation is well-earned: The 10 deadliest snakes in the world are all found in Australia.

More people are killed by bees than snakes

There. Snakes aren’t that bad after all. Innocent-seeming bees are responsible for more deaths each year than snakes.

The Bronx used to be overrun with rattlesnakes

Up until the early twentieth century, there was a sizeable population of rattlesnakes living in the Bronx. These were finally wiped out when farmers let their pigs hunt them. True story.