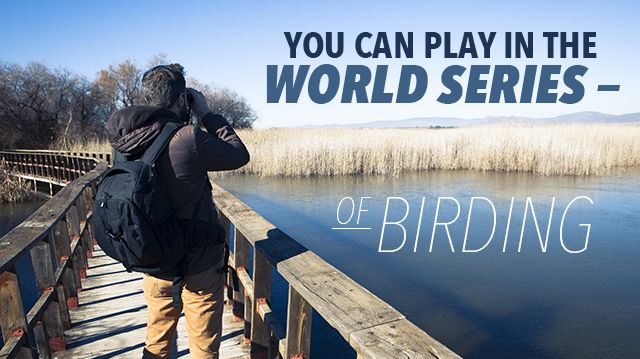 Formerly known as bird-watching, birding is an activity the whole family can enjoy. It’s fun, educational and relatively inexpensive — until you really get the bug and start taking foreign birding trips. Birders create life lists, literally lists of the individual species sighted throughout their lives. It is indeed a lifelong pursuit. It’s also a recreational activity that stresses not only bird viewing, but an appreciation for native habitats and the natural world.

Start out by purchasing a good field guide to birds. Read it at leisure, focusing initially on birds that live in your area. Learn how they appear, when they are in your region, and what their calls sound like. If you have a bird feeder and/or birdbath, you can start your observations by looking out the window.

The only equipment required when you first start out is a decent pair of binoculars — decent at this stage doesn’t have to mean costly. You might also want to use a camera, but your phone should suffice. Taking a picture helps if you can’t identify the bird immediately, since you can examine the photo later online or compare it with photos in the field guide.

Go to local parks or just walk around your neighborhood looking — and listening — for specific species. You can download apps that provide species information and allow you to keep track of your sightings. There’s also the old-fashioned way — jot down the birds you’ve identified in a notebook.

Twitching — also known as chasing — refers to the serious birder who travels a considerable distance to glimpse a rare species. That’s a person dedicated not only to birding, but to creating an exceptional life list.

This year marks the 33rd Annual World Series of Birding (WSB) competition. The event takes place every May in New Jersey, perhaps not the first place most folks think of as prime avian habitat. However, the Garden State could easily become the Bird State, since it is located in the midst of the Atlantic Flyway. Each spring, millions of migrating birds head north from their southern winter homes, and each fall the opposite journey takes place. The Atlantic Flyway is bounded by the Atlantic Ocean to the east and the Appalachian Mountains to the west. “New Jersey’s latitude puts it about midway between the equator and the northern forest and the Arctic,” according to the New Jersey Audubon Society. In other words, it’s a birder’s paradise.

On WSB day, teams from all over the world comb the state from top to bottom trying to identify as many species as possible via sight or sound. There aren’t many states where people can travel its entire length easily in 24 hours, but New Jersey is one of them. From humble beginnings, the WSB has grown to thousands of participants and raised millions of dollars for bird habitat conservation.

Teams choose their routes individually, honing in on prime birding sites. The finish line at the end of the 24 hours is at Cape May Point State Park, at New Jersey’s southern tip. The number of species sighted each year varies, depending on weather and weather-related fronts, as well as good old pluck and luck. The average number of birds identified is 165, but the top year recorded 270. Since its inception, a total of 330 species have been recorded, according to NJ Audubon.

Anyone can participate in the WSB. The event brings together teams consisting of community, school and youth groups, environmentalists and conservationists, businesses — you name it. While all registration fees go to New Jersey Audubon, teams are free to take pledges to benefit their own nonprofit organizations. Various awards are given out, including youth and senior recognition. New this year is an app that allows participants to add species during the day, and then submit their final list from their phone.