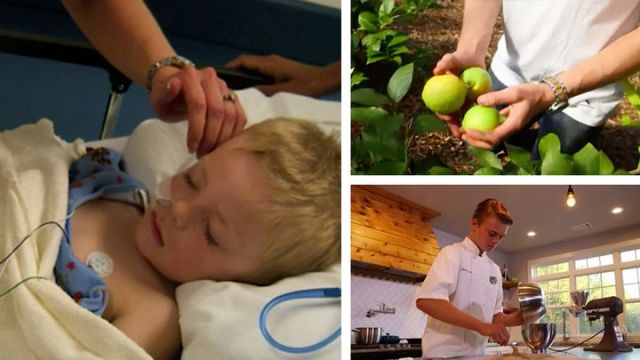 Mason Tyson’s life got off to a rough start. But this is a story about a kid who beat the odds and has come back healthier than ever. If you are looking for some serious inspiration (and some lessons about health) then you’ve got to check this out.

Four-year-old gets a devastating diagnosis on his birthday

Mason was just about to celebrate his fourth birthday when his parents, Scott and Nicole, were forced to rush him to the emergency room after they felt a lump in his abdomen.

It turned out to be something called a stage IV neuroblastoma, which is a very rare form of childhood cancer. In an instant, the family’s life was turned upside down. As Mason’s father, Scott, later explained, “I think when any parent hears the word ‘cancer’ associated with their child, it’s gut-wrenching. You don’t have any control. You feel no control.”

Doctors performed surgery to remove the tumor, but tests and scans indicated that tumorous cells remained in his lymph nodes. Chemotherapy remained an option, but after weighing the pros and cons, the family believed the side effects were too risky.

Ultimately, however, the health crisis prompted the entire family to look at its diet and lifestyle. As Scott explained, “We realized, first off, we’re living horribly as far as what we’re putting in our body, food-wise.” The Tysons decided to go with a largely organic and plant-based diet. Yes, they sometimes ate meat, but it became an occasional side (instead of the main entree).

The switch to a mostly plant-based diet wasn’t always easy. As Mason recalls, “I remember very long nights where I was reluctant to drink juices or eat my vegetables.” But the health benefits would soon become apparent. Mason’s cancer eventually became non-progressive and he is now deemed by his doctors to be cancer-free.

There is no way to say for sure if Mason’s plant-based diet was decisive, but the family credits both the surgery and his clean eating as being instrumental in his remission.

The health crisis has prompted the family to give back in a big way. In 2009, the Tyson’s started their own 180-Degree Farm, a non-profit that helps provide organic produce to families facing cancer or other serious diseases.

As the Tyson’s explain on their website, “As Mason’s cancer became non-progressive, we realized we needed to do more than just grow good food for ourselves. We wanted to produce for the local community, healthy, organic, “clean foods” that did not contain pesticides, herbicides, hormones or antibiotics.”

Mason is now cancer-free (and a beacon of hope)

Mason, now 15, appears to be living proof that eating a plant-based and pesticide-free diet is conducive to good health. The young man not only helps deliver organic vegetables to the children’s cancer center where he was once treated, but he is also studying to be a chef.

Summing up is aspirations he says, “I want people to understand that a good diet, especially a clean one, is a necessity to life.”

The link between pesticides and cancer

That message is increasingly important. A number of recent scientific studies and reports have linked pesticide exposure to childhood cancer. As Dr. Chensheng Lu, an associate professor at Harvard explains, “Childhood cancers are increasing year by year in this country, (and) there is disagreement about what is contributing to that, but pesticides have always been on the radar.” In fact, pesticide exposures have been linked to a 47 increased risk for childhood leukemias.

Conversely, numerous studies suggest that a plant-based diet can help prevent cancer, which is why the American Institute for Cancer Research recommends fruits, vegetables and whole foods as one of the most effective ways to lower one’s risk for the disease.

To learn more about Mason Tyson’s inspiring story, check out this amazing video: