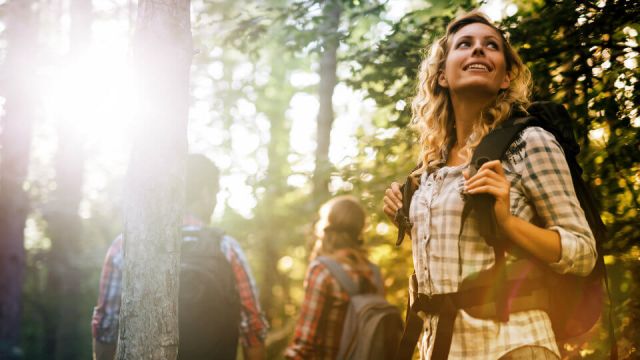 In North America, it’s easy to immerse yourself in the natural world.

For those of you who love the great outdoors, you can relate to the feeling associated with being out in nature. It can be a tough feeling to describe, but when it all boils down, a forest will make you feel relaxed, clear-minded and, in many ways, grateful.

Forest bathing, better known as “shinrin-yoku” in Japan, utilizes this positive experience to provide people with an option to heal and promote wellness. If you have not yet given forest bathing a whirl, now is the time.

The lowdown on forest bathing

Originating in Japan, “forest bathing” is defined as an interactive experience with the atmosphere of a forest. By focusing your attention on all of your senses, you can essentially “bathe” in the wonder and beauty of the forest. The evidence is now mounting, supporting the link between this increasingly popular activity and positive wellness.

As stated in this study, after studying 280 participants, it was found that forest bathing lowered their pulse rate, lowered cortisol levels (which is associated with stress) and lowered their blood pressure. While studying the nervous system of these participants, it was found that the part that is active when we are stressed showcased less activity.

In comparison, the part of the nervous system that is activated when we are relaxed displayed increased activity. Since chronic stress has been linked to everything from poor immune function to depression, it is imperative that more people take a proactive approach.

Study after study, forest bathing is being recognized as a well-evidenced positive health activity. Although there are likely a number of contributing factors, the phytochemicals emitted from the trees are believed to play a significant role.

Here is what the research has to say, supporting six core benefits (and then some).

As stated above, trees emit an aromatic substance known specifically as phytoncides. These are the woody essential oils that we’re all so familiar with, including α-pinene and limonene. As reported in this study, phytoncides naturally increase human natural killer cells. These cells are what target virally-infected cells and cancer cells.

From coronary heart disease to type 2 diabetes, forest bathing has been shown to significantly reduce your risk of developing such illnesses. This is likely due to a number of factors, including a decrease in cortisol levels. Forest bathing has also been shown to reduce inflammatory cytokines and enhance antioxidant function.

For those already living with conditions like diabetes and chronic heart failure, forest bathing is an effective adjunctive treatment option. Some experts believe that the effects are almost immediate and can be measured just five minutes after entering a forest. This incredible study shows how walking in a forest not only decreases blood glucose levels but also alters hormonal secretion and autonomic nervous system functions.

Walking in nature will help you heighten both physical and mental energy. While studying a short two-hour forest bathing program in Taiwan, it was found that this activity acts as an effective psychological relaxation strategy. Emotional states such as depression-dejection, anger-hostility and tension-anxiety all significantly improved. The researchers concluded that forest bathing has a positive effect on anxiety and negative emotional states.

It has been found that even when you do not increase the amount of physical activity you do, being out in nature promotes better sleep. While studying this effect, researchers concluded that walking just two hours in the forest led to a 15-percent increase in sleep time. Sleep quality also improved.

I don’t live near a forest, what can I do?

If you do not currently have regular access to a dense forest, no need to fret. Although a dense forest is believed to be the most effective based on the corresponding sights, sounds and smells, experts agree that local green spaces (especially those with mature trees) can yield beneficial effects.

Urban green spaces have long been studied based on their ability to promote social interaction, physical activity and psychological restoration. They also yield environmental benefits, including their effect on greenhouse gas emissions.

Whenever possible, visit a green space daily — even if it is just your local park. This weekend, hit the road and discover the natural wonders beyond your busy streets. Once immersed in nature, you will feel as though a weight is being lifted off your shoulders.

It is time to reconnect with nature. After all, John Muir said it best, “The clearest way into the universe is through a forest wilderness.” So, get out and explore!

Free book reveals how to fight disease and heal your body with lemon! Click Here =>