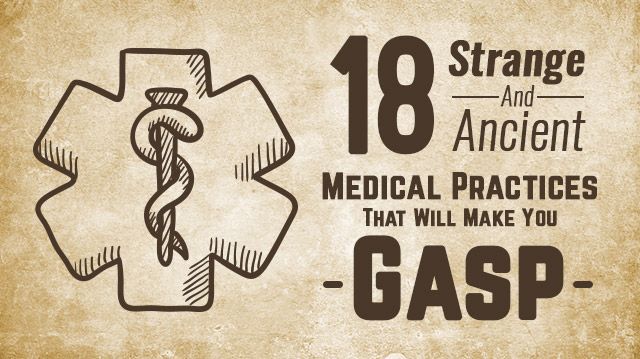 Our ancestors relied on herbs, essential oils and other natural ways to stay well. On the flip side, their world included medical practices far more harmful than healing. These practices probably originated the phrase, “The cure is worse than the disease.”

Young children still “cut their teeth,” but that’s not a literal practice. It once was, though — doctors would cut through a baby’s gums at the onset of teething to let the deciduous teeth appear. With unsterilized instruments, it’s likely many babies died needlessly from infections.

A sixteenth century tome advised giving children prone to bedwetting a rotten mouse to eat. Not just any mouse — a putrefied one.

Ancient Egyptians also found medicinal value in dead mice. They would pulverize the bodies and make a paste, which, when slathered on the gums, was said to relieve toothache. For a really bad toothache, an entire dead mouse was applied.

Another piece of sixteenth-century advice — if you have a sebaceous cyst, rub it with a dead man’s hand until the cyst gets hot. Supposedly, it would then shrivel away. That’s the cyst, not the dead man’s hand.

In the twelfth century, hemorrhoids were removed via a cautery iron. Well, it did get rid of them…

Relieve constipation by cutting a beet or cabbage root to the shape of your finger, dust with salt and stick it up your anus.

Improve your eyesight by bathing your peepers in the juice of hen or goose dung.

In eighteenth- and nineteenth-century Europe, one remedy for correcting a stutter or other speech impediment was partial tongue removal.

Things go better with coke, according to many nineteenth-century physicians. Cocaine was recommended for all sorts of ailments, including depression, headaches and toothaches.

If your children are suffering from a cough, give them cough syrup containing heroin. That’s a concoction Bayer offered in 1920s Germany.

Arsenic was commonly used to treat syphilis. If that doesn’t work, try malaria instead! An Austrian physician actually won a Nobel Prize for his efforts to cure syphilitic patients by giving them malaria. It was something to do with the high fevers. Yes, many of the patients died, but the ones who survived no longer had the clap.

In ancient Mesopotamia, physicians didn’t bother to examine the patient. Instead, a sheep was sacrificed and the liver examined. The condition of the sheep’s liver gave insight to the patient’s condition.

There is no shortage of substances used in mankind’s endless quest to separate sex from reproduction. In ancient Egypt, women placed crocodile dung in their vaginas, an early variation of the diaphragm. Other methods included the following:

Today, there’s Botox — which is botulinum toxin. In the past, paraffin wax was injected into wrinkles to smooth them out. Unfortunately, wrinkles were usually replaced with lumps.

If you were incapacitated by respiratory issues in the seventeenth and eighteenth centuries, your doctor might try to improve your breathing by administering a tobacco smoke enema. Yes, that’s tobacco smoke blown up the rear end. It was also used as a cure for the common cold. Scientists haven’t found the key to that one yet, but it’s doubtful they’ll re-examine this ancient practice.

Folks in medieval Europe were apparently prone to elf sickness, a disease caused by invisible elves shooting invisible arrows into them. Fortunately, there was a cure. Fresh dwarf elder made into a drink would cure the sickness and keep the elves at bay.

We can laugh at, or sympathize with, the treatments afforded our forebears, but it’s likely readers centuries hence will look back at some early twenty-first century medical practices and wonder, “What were they thinking?”