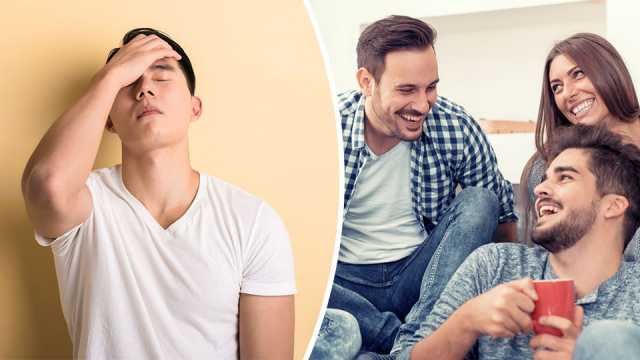 Gray locks and glasses may work for someone like George Clooney, but they were not exactly a great combination for me when I was growing up as a teenager. I was unusually shy, to begin with, but when stray white hairs started sprouting before my fourteenth birthday, I went into a psychological shell.

Sure, trying to navigate school corridors half-blind with a baseball cap on wasn’t ideal. But it was far better than having classmates ridicule my egghead spectacles or trying to pluck those pesky gray strands when I wasn’t looking.

It retrospect, it’s clear that I suffered from something that psychologists call social anxiety disorder (SAD). Basically, it’s a condition where people avoid circumstances because they fear being evaluated in negative terms. Specific phobias can include but are not limited to:

Sexual identity, body image and intelligence can be at the root of social anxiety too. Generally speaking, a person with social phobias avoids scenarios that induce anxiety. However, failing to face up to normal challenges can quickly lead to feelings of inferiority, inadequacy and depression. In other words, social anxiety can become a vicious cycle that becomes harder and harder to break out of.

As you might expect, social anxiety is a very common problem. Psychologists say, for instance, that at least seven percent of the population suffers from the condition at any one time. In addition, about 14 percent of the population will experience severe social anxiety at some point in their life. That makes it the third leading cause of mental distress in the country.

Social anxiety is a spectrum disorder and symptoms can range from mild to severe. They include:

Most people with social anxiety understand that their fears are irrational. Yet, simply pointing out their self-defeating outlook and habits does little to alleviate the fear and discomfort they feel. Typically, social anxiety manifests most often in the following situations:

Social anxiety disorder has afflicted many high-profile individuals. The singer and actress Barbra Streisand “froze” during a Central Park concert when she couldn’t remember the lyrics to a song. The experience was so embarrassing that she avoided singing on stage for almost three decades.

Similarly, numerous athletes, such as Olympic swimmer Susie O’Neill, have suffered from social anxiety disorder. However, O’Neill managed to conquer her fears — which were so acute that she feared winning if it meant standing on the podium and talking to strangers — by garnering eight career Olympic medals.

Social anxiety affects each person in unique ways. In addition, different people find that different remedies work them. The NFL running back Ricky Williams, for instance, was so debilitated by social anxiety disorder that he was afraid to visit airports or even leave the house. Initially, Williams was prescribed the antidepressant Paxil to treat his condition, but after experiencing undesirable side effects Williams tried using cannabis, which he described as “10 times better than Paxil” during a “60 Minutes” interview.

More conventional forms of treatment for social anxiety disorder include cognitive behavioral therapy. This is an approach that involves a combination of education as well as practical skills that are practiced repeatedly.

The idea here is that learning why you respond anxiously in social settings is only part of the solution. To truly overcome social anxiety, it is necessary to practice behaviors repeatedly so that you rewire your brain and consolidate new memories. In other words, those undergoing cognitive behavioral therapy learn the theories behind their disorder, but they also engage in group exercises that gradually desensitize them to the scenarios that cause social anxiety in the first place.

How I gradually overcame social anxiety

Social anxiety undermined my high school experience, but by the time I reached college I had gone a long way towards outgrowing it. Sure, I took a couple of years off in between, which I think was critical to my development as a person.

I became a passionate reader and an avid jogger. Both these activities, I believe, helped me rewire my brain for the better. In particular, studying psychology gave me insight into anxiety — including why people experience it and how it can be managed in healthy ways. In addition, I’m convinced that long-distance running boosted the production of “feel good” neurotransmitters like serotonin and endorphins, which contributed to a much more stable mood and personality.

As a consequence, I emerged much more confident in my identity. Barbs, slights and derision which I might have found crushing beforehand seemed to have much less impact. I simply liked the person I was becoming — and that was enough. When you are assured of who you are, then you don’t allow others to become the yardstick that determines your self-worth.

I believe a strong identity is one of the most important things that parents and teachers can help nurture in young people. An insecure sense of self can hold people back from experiencing all the amazing possibilities life has to offer. When you are not living fully, it’s almost inevitable that your inner emptiness will begin to manifest as fear, anxiety and depression. Social anxiety can paralyze you with fear, but with a little knowledge, effort and courage, you can overcome it too.