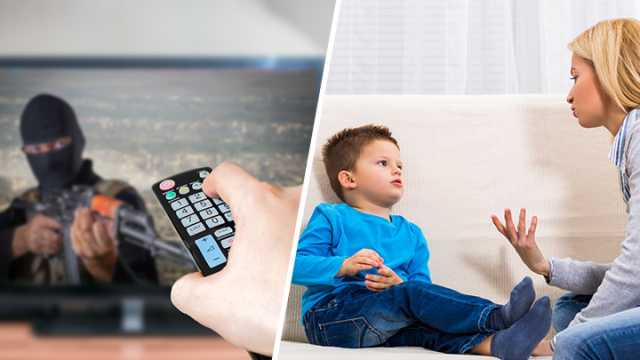 My nine-year-old nephew has a life-threatening illness called cystic fibrosis (CF). Thankfully, medical advances are helping to keep him healthy and he’s leading a relatively normal life. However, I’ll never forget the pained expression my sister had when she learned the news about her son’s disease.

I saw that same anguished look on my sister following the mass shooting at Sandy Hook Elementary School where a disturbed gunman killed 20 children ages 6 to 7. The incident happened less than an hour away from my sister’s home in Connecticut. CF was menacing enough. Now, she was confronted with yet another horrific threat. They say school shootings and terror episodes are statistical rarities — and perhaps that is true — but they have become every parent’s nightmare.

My sister and brother-in-law had to level with my nephew at an early age about the seriousness of his disease. Put simply, knowing the facts was important to keep him healthy. He’s handled this knowledge very well.

In a sense, today’s parents are faced with a similar predicament — they have to level with their children about threats like terrorism and school shootings. It may not be an easy conversation to have, but it is a very important one.

Talking to kids about terror

Ideally, childhood is a time of innocence wonder, wonder and enchantment. For young people, life is filled with magical possibilities that are as endless as their fresh imaginations. Creativity, play and joy are as natural to them as flight is to butterflies.

Inevitably, our adult world is bound to rudely intrude into their lives and awareness. School shootings and terrorism are just two of the threats that today’s kids are forced to confront. As parents and adults, we are faced with a dual challenge. We want to keep our children safe and that means keeping them informed. But we also want to safeguard their goodness and purity.

“How do I talk to my kids about terror in the world?” It’s a question many parents are asking these days. A discussion like this may be hard to have, but it increasingly necessary and far better than burying one’s head in the sand and pretending that the problem doesn’t exist. It is possible to talk to children truthfully about risks, but it is important to be reassuring as well.

“Why do bad things happen to good people?” This is a related question many adults are struggling with too. The recent bombing in Manchester, England, which killed 22 people, was both gruesome and senseless. The fact that children were targeted only seems to make the incident more inexplicable. Why would anyone want to hurt the most innocent and vulnerable members of society?

Unfortunately, notoriety and extensive media coverage is a motivating factor for many lone wolf attackers and terror organizations. Too many disturbed individuals and groups have access to weapons. As a result, it’s impossible to prevent every harmful incident from happening. However, children should know that the risks are low and millions of good people are trying to protect them. Here are a few suggestions for discussing terror with kids while keeping things in perspective:

This is probably the hardest question of all, but it’s one that children are bound to ask. According to terrorism expert Jessica Stern, who teaches the subject at Boston University, those who commit horrific acts of terror have often suffered some form of abuse, neglect or trauma themselves while growing up. Consequently, they try to victimize others in order to feel empowered. Stern’s theory in no way justifies terror, but it may help explain it.

At the very least, it calls attention to the cycle of violence, which we must find ways to break whenever we can. Stern’s view also humanizes the perpetrators, which is also important. Terrorists may dehumanize their victims, but ultimately their approach leads nowhere and accomplishes nothing.

In contrast, we want to talk to children about terror in ways that encourage empathy and understanding. That way they’ll have the mental tools — and a more humane cognitive vantage point — so that they can respond to life’s problems more creatively and imaginatively.

Risks of terror are low

Hiding unpleasant news from children isn’t the answer. But parents don’t have to unduly alarm kids either. It’s important to put the risks in perspective. According to a UN report, the odds of being killed in a terror attack are about 20 million to one. Parents can explain that terror is a risk, but also that it is something that is extremely unlikely to happen to them or anyone they know. Indeed, the average person is far more likely to be hit by a meteor than die in a terror attack, which should tell you how remote the risk from terror really is.

Talk of terror can be upsetting. Children need to know that their parents and family members are looking out for them and doing everything they can to ensure their safety. Indeed, it is important to give young people a sense that they have a protective circle around them that includes teachers, police officers and first-responders who are dedicated to protecting them. In turn, this is a good opportunity to let kids know that they need to look out for the wellbeing of their siblings and friends too.

Violence is not the answer

Many factors feed the kind of fanaticism that gives rise to terrorism. Lack of education, an absence of economic opportunity, the oppression of women and social injustice can contribute to social instability. Many terrorists mistakenly believe that acts of violence are the only way to change what they perceive as an unjust world order.

In contrast, truly humane leaders — Gandhi, Martin Luther King and Nelson Mandela, for instance — effect lasting positive results for oppressed people because they embrace peaceful methods. Talking about terror is an opportunity to explain how non-violence is the most effective means of resolving a conflict.

Raising kids who help make the world a better place

The New York Times columnist Thomas Friedman once made an interesting observation. He said that people in many troubled parts of the globe can be divided up into two camps — firemen and arsonists. By that, he meant that there are those who are forever starting fires and those who are trying to put the flames out.

The world needs more firemen. After all, they are in the business of protecting people, limiting damage and taking responsibility when danger arises.

Talking about terror can be an opportunity to nurture the kind of values and mindset that we’d like to see our young people develop. Greater empathy, a protective attitude towards others and a heightened sense of concern for humanity as a whole are a few of the traits that will serve both individuals and society well. It is precisely those qualities, however, that those who commit terror seem to lack.

Teach kids how to handle challenges

Ultimately, raising smart, empathetic, confident and hopeful kids may prove to be one of the best antidotes to terror. Put simply, society needs bright young people who can approach social challenges creatively.

Unfortunately, some young people have been taught to approach life destructively. On the other hand, human progress is made by individuals who learn to approach challenges patiently and constructively. Talking about terrorism may be a little scary for kids, but we need to do so in ways that help them get beyond fear.