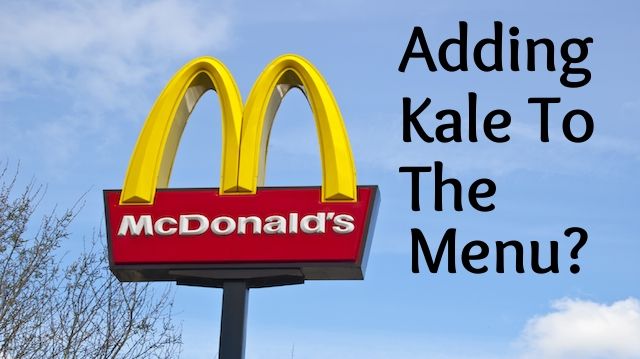 In a recent set of statements, the infamous fast food antihero, McDonald’s, announced that it will be testing out recipes with kale in select areas. While kale is indeed brimming with all sorts of great nutrients, we somehow doubt McDonald’s is going to do this right.

Specifically, McDonald’s spokespeople have stated that kale will be introduced as part of a breakfast bowl in certain Southern California locations, and will feature in three salads to be tested out across locations in Canada.

This is a manifestation of the franchise’s new mission, which, according to CEO Steve Easterbrook, is trying to morph into a “modern progressive burger company.” McDonald’s sales have been plummeting over the past few years, and the company is scrambling to keep up to the growing consumer demand for real food.

The funny thing is, just a few months ago, McDonald’s ads were literally poking fun at the health-conscious crowd. During one of the ads, while zooming in on a piece of lettuce housed within a Big Mac, the narrator assured the audience that it would never be replaced with kale. My, how McDonald’s tune has changed.

On the irony of kale featuring on a fast food menu, Jennifer Lilley, writing for NaturalNews.com, aptly observes:

“Isn’t sandwiching a few bits of kale between greasy burgers and processed cheese similar to someone ordering several slices of pizza but thinking they’re making it ‘healthier’ because they’re sipping water as they eat it? Kale is indeed healthy, but adding it to something that’s outrageously unhealthy doesn’t make the food — or the fast food chain it came from — some kind of health food superstar.”

The addition of kale to the menu echoes previous half-efforts by McDonald’s to add the term “healthy” to its reputation. As we previously reported, McDonald’s has recently announced the end of the use of certain antibiotics for raising its chickens. However, other antibiotics are still being used.

Also, in its recent mission for transparency, McDonald’s put out videos of what goes into famous menu items, such as French fries, but the ingredients list did more to dissuade us than reassure us. Now, Hamburglar has been redesigned as an average-weight, suburban father… yeah we get it McDonald’s, but it’s not going to help. 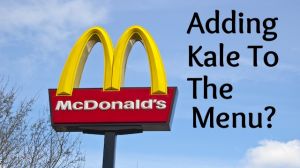 Kale is no doubt a superfood, and deserves this title due to the heaps of vitamins, including vitamins A, C, E and K, as well as the large range of minerals it contains. Kale also contains natural sulfur compounds, which have been the subject of several studies regarding their anticarcinogenic properties. On top of that, it is full of fiber, which is essential for a healthy heart.

However, kale is one superfood that should always be purchased organic. Year after year, conventionally grown kale appears on the Environmental Working Group’s (EWG’s) list of “Dirty Dozen” foods with the largest concentrations of pesticide residues. It is unlikely that McDonald’s will be using organic kale.

If you’re shuddering at the thought of kale, all alone and scared, on a fast food menu, we understand completely. It should be surrounded and celebrated among other healthy, REAL foods, not propped up against deep-fried, GMO-filled, preservative-laden food imposters. If McDonald’s think this will build consumer faith in their new “healthy” mission, they’re in for a rude awakening.