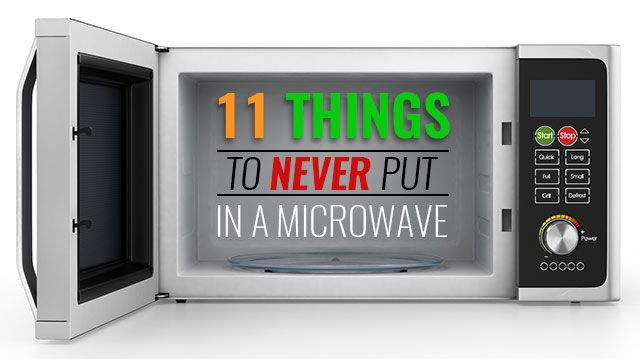 We’ve all had at least one embarrassing microwave incident that we’d rather not tell anyone about. When you foolishly left the aluminum foil on the leftovers and they’ve sparked like crazy, or you didn’t know there was a metal lining on the bottom of that plate.

While there are some seriously obvious objects that shouldn’t go in the microwave, there are also many others that might slip under your radar. Best-case scenario is a few embarrassing sparks, but the worst is far more alarming, potentially making you ill, exposing you to toxic chemicals or even starting a fire. Read on and find out how you can avoid these dangerous mishaps.

Styrofoam is composed of a mix of plastic materials, meaning it can release a concoction of harmful chemicals into your food when subjected to heat. Put leftovers into a glass or ceramic dish instead, and cover with a paper towel before microwaving.

Many people often forget to take their frozen meat out the night before and then arrive home from work wanting to cook a quick meal. The logical course of action is to throw the meat on a plate, set the microwave to defrost and let the magic happen.

But frozen meat is notoriously difficult to defrost in the microwave. The thinner outside edges start cooking while the thicker inside remains completely frozen. This uneven distribution of heat can promote the growth of bacteria on your meat, making it much more dangerous to eat unless you cook it to a crisp. Make a concerted effort to take your meat out the night before and let it defrost slowly in the fridge to avoid this problem.

You know you shouldn’t put plastic in the microwave, but you’re probably guilty of this out of pure laziness. This is an issue because household plastics contain a chemical called bisphenol A (BPA), an estrogen-simulating compound, which can produce some serious hormonal disruption in your body. This, and a number of other toxic chemicals, can leach into your food when heated.

To be safe, stay away from putting any plastics in the microwave, even BPA-free ones. Even those plastic products, which claim to be BPA-free, have been shown to leach other estrogenic compounds into your food. No plastic is safe.

It might seem shocking, but even simple air can cause issues in your humble microwave. When you don’t put anything in your microwave and turn it on, there’s nothing to absorb the microwave radiation generated by this appliance. The result is that the magnetron — the electron tube that generates and amplifies microwaves — ends up absorbing the microwaves instead, potentially damaging your microwave and running the risk of a fire.

Often, when you can’t eat all your food at the restaurant, you’ll leave with leftovers in a handy paper bag. Resist the urge to simply warm your leftovers in the microwave in that same paper bag, as these bags are often treated with harmful chemicals that can contaminate your food. These same chemicals can often instigate fires, so it’s important to be cautious.

Placing fine China or metal-trimmed plates and bowls in the microwave is a big no-no. Even if the plate in question only has an inkling of metallic trimming, it still has the potential to cause a fire in your microwave. As a general rule, use only glass plates, bowls or mugs in the microwave. Once your food is heated safely, feel free to use classy dinnerware to impress your guests.

Cups or mugs of water

Whenever you microwave water in a glass or ceramic cup or mug for too long, bubbles can be prevented from forming. These bubbles would otherwise help to cool the liquid down, so when you move the cup after heating it in the microwave, it can release the heat violently and cause an eruption of boiling water. Avoid this burn hazard by simply heating the water for a shorter time period or doing it in short batches until it’s heated to your satisfaction.

Despite what you’ve heard about it being a quick, easy, safe way of cooking eggs, hard-boiling them in the microwave is most definitely none of these things. Rapid heat emitted from the microwave can create large amounts of steam inside the eggs, with nowhere to go except out. This pressure can be released by an explosion of scalding water. Stick to boiling your eggs on the stove to make things a little more predictable.

Some fruits — grapes in particular — should definitely not be heated in the microwave. Grapes can explode, and raisins can smoke or even catch on fire. 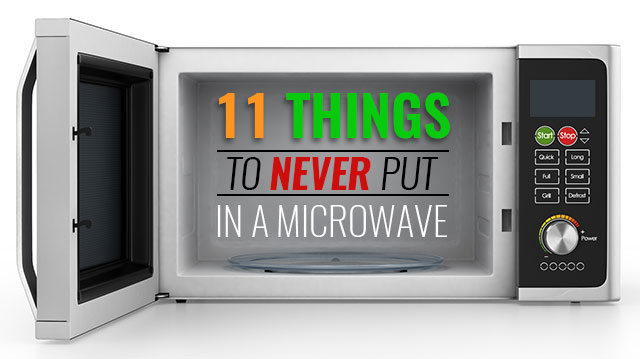 Certain brands of mugs made prior to the 1960s are glazed with compounds that emit radiation when heated in the microwave. These compounds can include lead and other harmful heavy metals, which can leach into whatever you have in your mug as it heats. Stick to drinking cold liquids out of any antique mug to play it safe.

Defrosting frozen breast milk in the microwave can be harmful for a number of reasons. Firstly, it can warm the milk unevenly, potentially creating scalding hot spots, which can burn the sensitive mouths of babies. Secondly, research indicates that heating breast milk in the microwave can destroy some of its immune-boosting proteins, particularly if heated on a high-power setting. To avoid both of these scenarios, pour hot tap water into a mug, place the bottle of breast milk in it and allow time to thaw.

Beside the dangers they pose, using a microwave places a disconnect between you and your food. If you’re pushed for time, try out these nine easy recipes that all take less than 10 minutes to prepare.