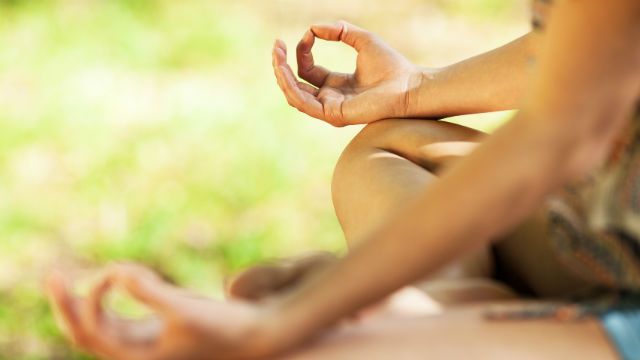 Or, perhaps the question should be, do you know what “om” really means? You may have even chanted it thousands of times as part of a yoga class, or at least seen the symbol, but chances are there is quite a bit you don’t know about this mystic syllable and most sacred mantra.

Om signifies the innate capacity within human consciousness to connect with something beyond itself. The sound transcends human language as it’s a matrix of all sounds. When chanting “om,” you may feel a physiological shift toward calmness, stability, and equilibrium.

Like many spiritual things, om is not easy to define as it can mean almost anything. It’s a sacred symbol for Hinduism, Buddhism, Jainism, Sikhism and Zoroastrianism. Even though it’s pronounced seamlessly so it rhymes with “home,” om is actually made up of three syllables: A, U and M, or, phonetically, “aah,” “ooh,” and “mmm.” Experts say those syllables can represent a slew of trios such as the heavens, earth and the underworld or the waking, dreaming and dreamless states.

The physiology of mantra, including om, has to do with the rhythm, tone, phonetics and reflexology of the tongue on the palate. The sound Aum in traditional Sanskrit, is made up of four parts, three audible sounds and the unheard sound, or silence, at the beginning and end.

The A sound, which is pronounced “ah” like father, resonates in the throat and is known as the primal sound. It includes all sounds produced by the human vocal chords and represents normal waking consciousness.

The U, pronounced like “who,’ vibrates in the back of the mouth, symbolizing dream consciousness where things are more fluid and both subject and object are within us.

The vibration reaches the lips with M, which is the final humming sound, representing deep sleep. It resonates in the front of the mouth and buzzes throughout the head.

The last sound is the silence after the M, where stillness, clarity and inner peace can be experienced.

Sitting for a moment in that silence and simply observing what it feels like is especially calming. If the OM mantra is repeated just for the feeling, even with no sense of meaning at all, the experience can be quite pleasant and balancing. With a better sense of the deeper meanings of the mantra, and different methods of using it, then the experience can be even richer as one progresses in yoga meditation.