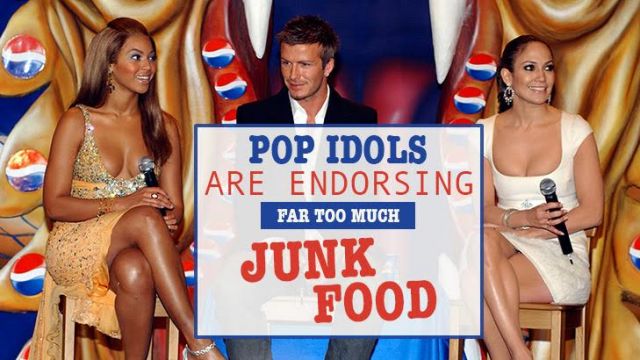 Let’s be honest, pop stars are often viewed as almost untouchable human beings. Justin Bieber has the ability to make young girls cry, simply by busting a move. This rather odd obsession is a discussion for another day, but most certainly ties into a much greater issue.

Growing up, my sister and I had subscriptions to the popular teeny bopper magazines. Heartthrobs were on every page and without noticing, these teen idols were promoting a range of products. From shoes to soda, pop celebrity status is a means to sell products — many are harming their fans.

Would you like a side of obesity with your teen idol?

It’s clear that celebrities endorse junk food. You see it all the time on television, billboards, radio, magazines — you name it.

Think about it, do you ever see Beyonce holding a piece of broccoli on the side of a bus? Of course not, because there’s no money in advertising broccoli. You do see her promoting Pepsi though.

For the most part, music celebrities endorse foods that are high in calories and low in nutrients, sold by big names like Coca-Cola, which was reported on in a new study, led by Marie Bragg, a public health researcher from New York University School of Medicine.

Of the 65 celebrities promoting both beverages and snacks, 53 had received at least one Teen Choice award nomination — these celebrities target young adults and children. More than two-thirds of the non-alcoholic drinks endorsed by celebrities were high-sugar beverages and soda.

Similarly, four-fifths of the endorsed snacks were high in calories and low in nutrients. When you look at the current teen population in America, one-third of this age group is now considered to be overweight or obese. Fifteen to 20 years ago, type 2 diabetes in children was unheard of — now it’s grown into a full-blown epidemic.

Between the years 2001 and 2009, the rate of type 2 diabetes increased by 21 percent among individuals 10 to 19 years old. Shockingly, in a 2007 study, published in the  Journal of the American Medical Association, it was estimated that 3,700 new cases of type 2 diabetes arise among American youth each year.

Teens are impressionable, especially when it comes to pop stars and junk food

This current issue, of course, starts with associated teen idols. They are promoting foods that are leading to chronic health complications, targeting an age group that has a hard time resisting urges. Teenagers often think they know it all — we’ve all been there and lessons have been learned.

The truth is, when you’re a teenager, you’re within a unique stage of development. Based on modern society, teens often look up to celebrities, helping them identify who they are themselves. They also often respond to endorsements in a more positive manner, when compared to the adult population.

Within this recent study, 590 products were analyzed, endorsed by 163 celebrities — all of which were listed on the 2013 and 2014 Billboard Hot 100 Chart. Endorsements for fragrances and makeup were the highest at 26 percent, followed by food and beverages at 18 percent.

Of the foods and beverages endorsed, researchers assessed each product based on a nutritional index. Foods were scored using a 1 to 100 scale, with higher scores showcasing healthier options. Points were added when options included nuts, fruits, vegetables, fiber and protein; points were subtracted for products that were high in calories, sugar, salt and saturated fat.

As you can imagine, some big names were included in the study, such as Pop-Tarts and Doritos. Sure, these can technically be considered “energy” dense, but they’re most certainly nutrient poor. Not surprisingly, 49 out of the 69 endorsed beverages were soda or high-sugar drinks.

At this time, teen viewership data was lacking, which will be a core focus moving forward. More research will be needed in order to determine how influential these celebrities are in terms of the choices both children and teens make. For now, it’s important to be open with your children and discuss both healthy and unhealthy choices.

For children and teens old enough, you can even discuss what marketing is and how it affects the decisions we make. In comparison to two decades ago, we’re living in a different world — we need to teach younger generations ways to identify product marketing so that they can avoid strong, potentially harmful messages.

Focus on positive education — don’t shelter your children. You want to teach them effective strategies so that as they grow and develop, they can make their own positive choices. We cannot protect them from everything in this life, but we can provide them with the tools they need.

Do you have children? If so, please feel free to share any experiences pertaining to pop idols and their influence — you may help another parent pick up on cues that they were initially unaware of. Let’s work together to create the brightest possible future for generations to come.