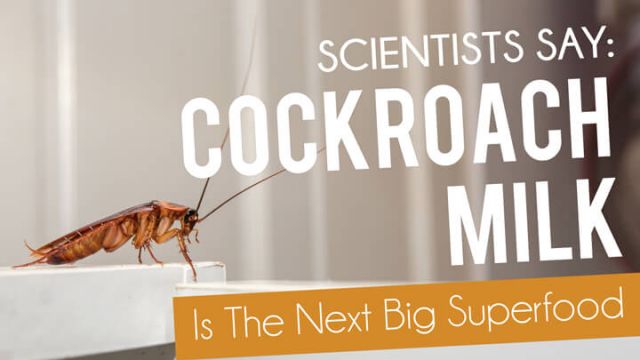 After spending seven years on research and three years getting it published, Dr. Sanchari Banerjee, Dr. Subramanian Ramaswamy and their team of scientists put together a study revealing that cockroach milk could be the next superfood. The group of international scientists at the Institute of Stem Cell Biology and Regenerative Medicine (inStem) in Bangalore, India, discovered that the species of cockroach that gives birth to live young (rather than eggs) produces a substance so highly nutritious, it contains almost four times the energy of cow milk, and three times the energy of buffalo milk.

While the idea may evoke complete disgust, research shows that “roach juice” could actually benefit human health, thanks to roach crystals that act as a complete food supplying proteins, fats and sugars.

“If you look into the protein sequences, they have all the essential amino acids,” said Dr. Sanchari Banerjee, one of the main authors of the paper published in July in the journal from the International Union of Crystallography (IUCrJ).

The female roach secretes liquid food after giving birth. The babies then feed and thrive on the substance produced in their mother’s intestine. This cockroach milk, which does not actually resemble cow’s milk, is rich in protein, sugar and fat.

Cockroach research dates back to more than 40 years ago, when Dr. Barbara Stay — a scientist and professor of biology — began studying evolution based on the life cycles of insects, says Forbes. During her research, Dr. Stay discovered that one species of cockroach was bigger than the others.

In 2006 researchers came together to continue the study. Each had a range of interests including why roaches grew at various rates and the technology in manufacturing protein crystals, among other things. But, it wasn’t until 2013 when the team discovered the potential for humans to consume cockroach milk.

But how do you milk a cockroach?

First, it’s important to note that not all cockroaches can be milked. Milkable cockroaches belong to a species called Diploptera punctate — the only known species of roaches that gives birth to live young and are found primarily in the Pacific area. In addition, they need to be approximately 54 days old, so that the embryos reach 40 to 45 percent gestation.

Second (and perhaps thankfully), cockroaches lack nipples, so they can’t be milked. Sadly, the process involves killing a cockroach without actually crushing it. To retrieve the nutritious milk, you need to open the insect’s abdomen and excrete it. Storing the milk is relatively straightforward, said Dr. Leonard Chavas, one of the scientists behind the research. “The crystals just need to be stored in a pH-neutral environment where it’s neither too acidic nor too alkaline.”

Crystals rather that milk

Don’t worry, cockroach milk will never be marketed like regular milk. Don’t expect to see it in the dairy aisle or alternative dairy aisle in your supermarket anytime soon. Although referred to as milk, this superfood really refers to the nutritious substance that is meant for baby cockroaches, “and not the white-colored liquid that you and I get from the supermarket,” said Dr. Chavas. It’s actually milk crystals.

And how do they taste? “It doesn’t really taste of anything,” Dr. Chavas said, as he described eating a sprinkling of the crystals — after losing a party dare.

So, while it’s unlikely that cockroach milk will be marketed like regular dairy milk or a milk substitute, we may see cockroach milk crystals in protein drinks, supplements or power bars, said Dr. Ramaswamy to The Washington Post. But of course, that would require mass production and a lot of cockroach deaths in the process.

Naturally, large-scale production creates certain challenges for researchers. First, scientists need to define the 3D structure of the cockroach milk so that manufacturers could get enough information to ensure the product is safe enough for humans to consume. Scientists also hope to create a bioengineered yeast that allows production of the same crystals without actually killing more cockroaches. Due to funding and the challenges associated with this type of research, researchers estimate that cockroach milk could be on the shelves, so to speak, in less than ten years.

While the thought of consuming cockroach milk may disgust you, there’s definitely something to be said for a bug that’s walked the Earth for hundreds of millions of years and can even survive a nuclear disaster. In fact, About Education says if you traveled back to the Jurassic period and walked among the dinosaurs, you could easily find cockroaches crawling under logs and stones in prehistoric forests.

So, as gross as it may seem, this magical “roach juice” might one day appear in the ingredients list on your favorite power bar — supplying you with enough energy to hopefully withstand a nuclear disaster.