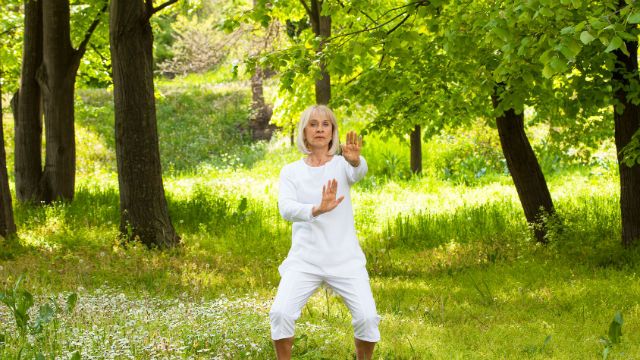 Dementia is a condition that severely affects the quality of life of many elderly individuals and their families. New research performed at Teesside University in the United Kingdom has found that a holistic program focusing on both physical and mental health may help to improve the lives of these individuals in several ways.

According to the Geriatric Mental Health Foundation, almost 10 percent of people over the age of 65, and nearly half of those over the age of 85, have some form of dementia. The most common form of this ailment in elderly individuals is Alzheimer’s disease, which is characterized by depleted nerve cells in the cerebral cortex, the brain’s center of reasoning, language and memory.

For their study, Teesside University researchers developed a holistic exercise program known as the Happy Antics program. This program includes cognitive exercises, physical exercises including movements based on the disciplines of yoga, tai chi and qigong, as well as guided mindfulness meditation. Study participants consisted of eight individuals with dementia, five caregivers and two volunteers who did not have dementia.

The study’s lead researcher, Dr. Yvonne J-Lyn Khoo, explains, “when the wellness approach is applied to exercise, holistic exercise strives to encourage individuals not only to take part in the physical activities, but also to become aware of their own physical and psychological states, and to perform exercise that is purposeful and meaningful to them.”

A systematic review, published in 2013 in The Cochrane Library, cited studies concerning individuals with dementia and physical exercise. From their review, researchers found that exercise may benefit the cognitive functioning of dementia sufferers, and also that exercise could improve the ability of these individuals to participate in day-to-day activities.

While it is not a cure, or an encompassing solution, combining physical and mental activity on a regular basis may offer some hope for dementia sufferers to live an enhanced quality of life.