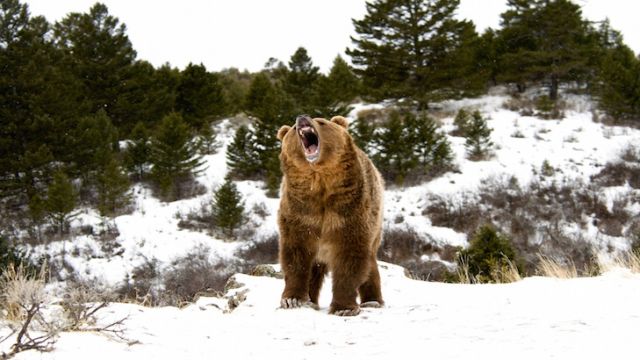 The extinction of the polar bear might be sooner than expected, but some of the animal’s DNA will continue to live on through interbreeding with other bear species.

Scientists aren’t able to agree on when exactly polar bears evolved from grizzly bears, but recent data suggests it was less than 500,000 years ago. Their evolution was fairly simple as far as evolution goes; some brown bears traveled north during a period when the Arctic Ocean was frozen over, and eventually became isolated from other bear species as they learned to survive by eating seals and other food sources in the Arctic. As those bears set up home in the North, they developed traits unique to polar bears, such as webbed feet, thick skin for insulation, and the ability to swim for long periods of time. Now such bears are vulnerable to the impact of climate change in the Arctic.

Temperatures are rising twice as fast in the Arctic compared to other parts of the globe, and the ice level is decreasing at a rate of nine percent per decade. Polar bears are having to travel longer distances to find food and mates, while warmer arctic temperatures are allowing grizzlies to travel further north in search of the same. The territories of the two species are overlapping. This could result in the eventual merging of the two species.

As the climate continues to warm and the ice continues to melt, could we see “Pizzly” or “Grolar” bears? And could this mean the polar bear will become extinct sooner than expected?

Researchers are currently awaiting the results of DNA tests to confirm that a bear shot by a Nunavut hunter a couple of weeks ago is indeed a polar/grizzly hybrid. According to the hunter, from a distance the bear looked like an arctic fox or a small polar bear. After shooting the animal, the hunter noticed a few traits that were inconsistent with a pure polar bear. The animal’s fur was white, its head was shaped like a grizzly, its claws were not webbed liked a polar bear’s, and it had a black nose that differentiated it from an albino grizzly. Researchers from both the University of Alberta and the Minnesota Department of Natural Resources believe that DNA tests will show the bear to be a hybrid of a grizzly and a polar bear.

Grizzlies and polar bears have bred in captivity before, but if DNA tests conclude that the bear shot in Nunavut is indeed a hybrid, it will only be the third time such a bear has been found in the wild.

In 2006, a hunter in the Northwest Territories killed what he believed to be a polar bear, but upon inspection noticed some peculiarities similar to those of the bear shot in Nunavut. DNA tests later showed that the father of the bear had been a grizzly and the mother a polar bear.

In 2010, the grandchild of interbreeding was discovered on Victoria Island, after a hunter again shot a bear that turned out to have unique characteristics. DNA testing in that case revealed that the mother of the bear was a polar/grizzly hybrid and the father a pure grizzly.

How does interbreeding impact the polar bear’s survival?

On the one hand, polar/grizzly interbreeding can be seen as a way of protecting polar bear DNA, but on the other hand, it could hasten the end of pure polar bears.

The hybrid bear won’t provide competition for polar bears, as hybrid species rarely do, but as the traits unique to polar bears become less and less efficient in the melting Arctic, it is possible that the end of the polar bear comes by way of reversion to the brown bear species. There would of course be traces of polar bear DNA found throughout grizzly populations, but as generations multiply and the Arctic melts, pure polar bears would eventually disappear.

The Pizzly or Grolar Bear is not the only hybrid species to pop up as a result of climate change, habitat destruction, or other changes caused by humans. In Montana’s Flathead basin, warming waters have allowed rainbow trout to overtake the native westslope cutthroat trout. Rainbow trout were introduced in Rocky Mountain lakes and rivers to lure anglers. This species is better adapted to warmer waters, and is putting the local trout population at risk.

Wolves and coyotes have also been known to interbreed, as have different butterfly species, though both animal families will also do so in the absence of climate change or reduced habitat. Hybrid bottlenose dolphins and false killer whales have been bred in captivity before by, you guessed it, Sea World, and theories exist that they could live in the wild, but so far there is no evidence of this.

We are living in such a precarious time in Earth’s history. The extinction of the polar bear is one of the many consequences of climate change. Animals, people, whole ecosystems, will struggle to adapt. What other changes can we expect to see in the coming years?