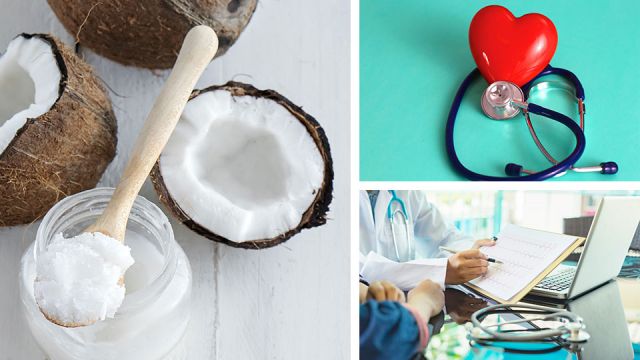 When it comes to coconut oil, the debate rages on. On the one hand, conventional health “experts” and the average American continue to write coconut oil off as a calorie-laden pile of saturated fat. To eat it would supposedly increase the risk of cardiovascular disease and somehow pack on the pounds, as these people are under the impression that eating saturated fat makes you fat. Never mind that people who eat high saturated fat diets actually lose fat and rapidly put on muscle.

But Alternative Daily readers and holistic health practitioners know better. We’re well aware that decades-old studies claiming that saturated fat clogs arteries and contributes to cardiovascular disease are complete baloney. And a new trial conducted by researchers at the University of Cambridge confirms the beneficial role of coconut oil.

As part of the BBC2 series of “Trust Me I’m a Doctor,” Professors Kay-Tee Khaw and Nita Farouhi recruited a group of 94 volunteers between the ages of 50 and 75 who had no prior history of diabetes or heart disease. The research team divided the volunteers into three groups, asking each group to consume roughly three tablespoons of either coconut oil, extra virgin olive oil or unsalted butter.

The volunteers were informed that they could consume these fats in whatever way they liked, as long as they were ingesting three tablespoons every day for four weeks. Before beginning the trial, researchers took blood samples to provide baseline measurements of cardiovascular markers, particularly LDL (“bad”) cholesterol and HDL (“good”) cholesterol. Understanding the ratio of LDL to HDL cholesterol levels provides a more accurate marker of a person’s risk of heart disease than just total cholesterol levels.

But the real surprise came when they examined the effect of eating coconut oil for four weeks. As with olive oil, the coconut oil group experienced virtually no change in LDL cholesterol, but they showed a significant 15 percent rise in HDL cholesterol… making coconut oil the most heart-healthy fat by far.

The takeaway? People who consume coconut oil on a regular basis should experience a dramatic drop in their risk of developing heart disease or stroke.

The BBC2 doctors were quick to indicate their confusion over the results and state that people shouldn’t start glugging coconut oil back based on a small four-week study. However, to those in the know, this is simply the icing on the cake for coconut oil as a highly beneficial fat source.

Here are the many other benefits of coconut oil:

Perhaps the most surprising benefit of coconut oil for most people is that it can actually promote weight loss. Coconut oil contains short chain and medium chain fatty acids, that can help to maintain healthy weight levels and even target excess weight. In a trial involving 40 obese women over the course of 12 weeks, consuming 30 milliliters of coconut oil per day was shown to not only reduce LDL and increase HDL cholesterol, it also reduced the average waist circumference and total body mass index (BMI).

Regular consumption of coconut oil can also support healthy immune function. Research shows that coconut oil boosts the immune system via its high levels of lauric acid, capric acid and caprylic acid, which have antifungal, antimicrobial and antiviral effects. Upon ingestion, our bodies convert lauric acid into monolaurin, which has been shown to treat viruses and bacteria that contribute to diseases such as herpes, influenza, cytomegalovirus and more.

Got skin problems? Coconut oil can help with those too. A 2014 study that examined the effect of capric acid and lauric acid (both of which are found in coconut oil) on Propionibacterium acnes, a commensal bacterium involved in acne inflammation, discovered that both compounds effectively treated P. acnes, thereby helping to reduce inflammation of the skin and acne breakouts. In another study, topical application of coconut oil was shown to significantly improve markers of atopic dermatitis, a chronic skin disease.

Still not convinced? The medium-chain fatty acids found in coconut oil have even been shown to kill off certain cancer cells, including those involved in colon cancer, breast cancer and endometrial cancer.

It’s hard to be an anti-coconut oil campaigner when you actually look at the facts. I, for one, plan on stepping into the kitchen and knocking back a tablespoon of virgin coconut oil right this very instant!