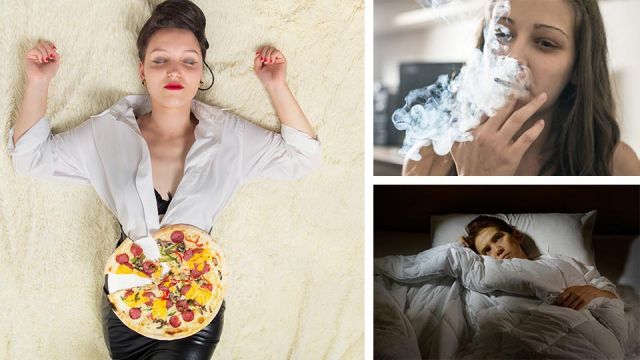 It’s fair to say that your brain is pretty darn important. Aside from being one of the largest organs in your body, it’s the control center for almost every conscious and unconscious function — from walking to breathing.

Beyond the vital functions, we rely on our brainpower for excelling at our job, making witty comments at the dinner table and generally just being awesome. It might come as a surprise, then, to discover that most of us aren’t treating our brains as well as we should.

In 2004, the World Health Organization released a report examining worldwide mental health. As part of the report, they explored the many ways in which common habits are undermining our mental health. Based on the report and more recent research, here are seven brain-damaging habits that you should probably stop doing immediately.

If you’re an Alternative Daily regular, chances are you’ve got sugar on your ill-health radar. Arguably the biggest cause of inflammation in the average American, excess sugar consumption can lead to a wide range of diseases and health problems. And it doesn’t help that the stuff if everywhere. Even when you’re trying to avoid it, chances are you’re still eating it.

And if there’s one place in the body where sugar’s ill effects are most felt, it’s the brain. Sugar has been shown to bind to dopamine and opioid receptors in several areas of the brain, creating an addiction similar to that of Class A drugs like heroin. Add to this the highly inflammatory effect that sugar consumption has on the brain, and you should have enough motivation to steer well clear of sugar from now on.

Despite recognizing just how important sleep is for our health, most of us still aren’t getting nearly enough. Plenty of sleep means healthy hormone balance, speedier healing, boosted immunity… and a brain that actually does what it’s supposed to do. The opposite is true for a lack of sleep.

The effect of sleep deprivation on brain health is the subject of a plethora of research. There’s the fact that alertness and cognitive performance decline dramatically with less sleep, the reduction in verbal learning and memory recall, and the negative emotional state of a brain that hasn’t received enough shuteye. There’s also the fact that people who haven’t received enough sleep are more prone to depression, anxiety and an inability to accurately register other people’s emotions.

Think you’re doing the right thing heading into the office with a cold? Think again! When our body is in a state of illness, the best thing you can do for your brain is to slow down, take it easy, eat well and rest as much as possible — basically the opposite of going into work. If you care about your brain, stay home and take it easy. Your colleagues will probably thank you for it too.

The fact that smoking is bad for your health is well known, but it’s fair to say that the average smoker isn’t aware just how damaging it is to brain health. Not only does smoking negatively affect prenatal brain development, it also creates brain-controlled hormone imbalance. Even more concerning is the fact that smoking is directly associated with shrinkage of certain areas of the brain.

I’ve lost count of the number of people I’ve met who skip breakfast on a daily breakfast. Personally, I can’t understand it — if I go more than an hour after waking without eating, I’m ravenous and angry at the same time… some might say “hangry.” But beyond the simple appetite motivation, there’s an even more important reason not to skip breakfast: it negatively impacts brain health.

Avoiding breakfast means a person’s already-low blood sugar levels go even lower, starving the brain of essential nutrients and forcing it to run on emergency mode. The result is impaired concentration, imbalanced emotions and poor memory.

6. Sleeping on your stomach

This one will probably come as a surprise to most people, especially considering a large proportion of the population actually sleeps on their stomach. Similar to sleeping with your head under a pillow, sleeping on your stomach puts you at greater risk of oxygen depletion while you’re slumbering, which is Public Enemy Number 1 for your brain. Oxygen depletion and an overconsumption of carbon dioxide while sleeping can have far-reaching ill effects for brain health, so if this is you it might be time to work on changing your fave sleep posish.

As if you weren’t already guilty enough over your binge eating over the holiday season, here’s another reason to make moderating your food intake a new years resolution. Overeating actually causes hardening of the brain arteries, which in turn reduces mental capacity and impairs your ability to make witty remarks at the dinner table. Moderate your meal size and you should be just fine.