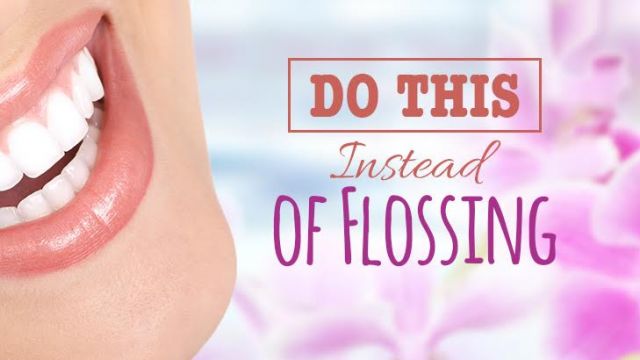 Growing up, kids are taught certain steps and routines — you wake-up, eat breakfast, brush your teeth and carry on with your day. Within these daily routines, they each have their own steps. My mom always told us — floss your teeth, put a pea-sized glob of toothpaste on your brush and brush away.
Like all other moms, she gave this advice because, well, it’s what we’ve been told to do — knowing that we need to protect our oral health. Perhaps your mom gave you similar advice, and now that you’re all grown up, do you still floss? If you said no, you have something in common with nearly one-third of Americans.

Using data from the National Health and Nutrition Examination Survey, the study also found that failure to floss was higher among men, individuals aged 75 years or older, non-Hispanic black and Hispanic adults, as well as low-income participants. Based on these findings, researchers believe education is critical — people need to understand the benefits of flossing.

The truth is, when we think of flossing, we automatically associate this activity with oral health and in turn, dentists. Positive oral health is something that should also be discussed with physicians — after all, oral health does contribute to overall well-being.

Why floss? Are there any concerns?

When it comes to old-fashioned flossing, there are clearly some key benefits. When you eat, you will often experience a slight buildup between your teeth. Over time, this soft plaque turns into hardened calcified plaque, better known as tartar. To remove plaque while it’s still soft and manageable, flossing is an ideal solution.

Once tartar forms, you increase your risk of tooth and gum disease, as well as potential heart complications. You may be thinking, “If flossing is so important, why aren’t more people doing it?” As mentioned, researchers suggest it’s a lack of education. People can be told to do something, but if they don’t understand why it’s important, this could act as a potential barrier.

Now that I have told you how important flossing is, I’m going to shake things up a bit. Yes, the concept behind flossing is critical — in that you need to focus on removing plaque and bacteria in order to promote positive health. Although flossing is better than nothing, there’s actually one other method that is superior.

Yes, floss most certainly removes chunks of food and some bacteria, but at the end of the day, it may not be enough. There is still some bacteria deep under your gums, which floss cannot reach. As this bacteria builds, simple sugars and carbohydrates essentially nourish these harmful colonies.

As bacteria grows and multiplies within the pockets under your gums, it can actually enter the bloodstream. From there, inflammation develops, increasing your risk of chronic disease. If you are already experiencing gum disease and related infections, a piece of string isn’t going to cut it.

You may need to first see a dentist in order to address this biofilm and the infections that are lurking within it. Once you have achieved a disinfected environment, it’s critical that you maintain it. This leads us to an oral irrigator — which is essentially a stream of pressurized, pulsating water.

As the water hits these hidden bacteria-ridden areas, pocket bacteria are flushed out, where it can be easily removed. As stated in RDH, a magazine created for dental hygienists, oral irrigation has taken a backseat to brushing and flossing for far too long. When used on a daily basis, home oral irrigation can better control gingival inflammation and bacteria.

Within one key study published in the Journal of Clinical Periodontology, after just 14 days of using the Waterpik water flosser, bleeding, pocket depths and inflammatory cytokines were all reduced. Since then, researchers and a variety of experts have continued to recommend some form of water irrigation in conjunction with regular brushing.

The final verdict? Flossing and brushing is better than simply brushing alone; however, a water irrigation routine along with regular brushing, seems to trump all options. Just like when we were kids, we can retrain ourselves to develop new habits and routines — start flushing that bacteria today to improve your oral health tomorrow.

There is one other completely natural option. It’s called Oil Pulling. You can learn more about it here.