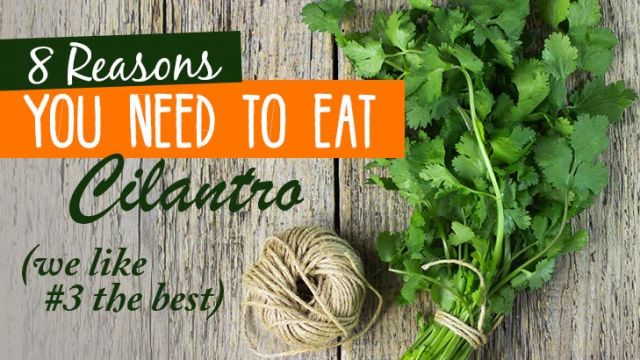 If you’re looking to add a new dimension to your recipes while giving your health a boost in the process, look no further than cilantro. The plant Coriandrum sativum is known by several names: cilantro, Chinese parsley, and coriander. The plant has fresh, delicious leaves, and pungent coriander seeds.

Cilantro is one of the oldest spices in the world. It is native to the Middle East and the Mediterranean region, and its culinary and medicinal uses have been traced all the way back to 5,000 BC.

Looking for a good reason to put cilantro on the menu? Here are eight!

Cilantro leaves are rich in vitamins, including vitamins A, C and K. The volatile oils found in this plant and its seeds are high in flavonoid antioxidants, including kaempferol and quercetin. They are also rich in phenolic acids.

All of these nutrients combined make cilantro and coriander seeds great for combating chronic inflammation, which can wreak havoc on the body if left unchecked.

It may help to calm the mind

Cilantro and coriander may help to ease anxiety. A 2011 study published in the Indian Journal of Pharmacology tested the effects of a cilantro extract on anxiety in various animal models. The study authors wrote:

It may help control blood sugar

Coriander is a spice used in traditional remedies for blood sugar control and diabetes. Consuming it may help to stimulate insulin secretion while lowering blood sugar levels. These effects on rats were found in a 2011 study published in the Journal of Ethnopharmacology.

The study authors stated that their study, “validates the traditional use of coriander in diabetes.”

It can help you sleep

If you awaken frequently throughout the night, this potent herb may help to give you a longer night’s sleep. A 2012 study published in Natural Product Research tested the sleep effects of cilantro extract on mice. The study authors reported:

It’s good for your heart

Thanks to the antioxidants and essential oils found in cilantro, it may go far in protecting heart health. A 2012 study published in the journal Food and Chemical Toxicology found that extracts of coriander seeds may help to prevent cardiovascular damage in rat models.

It may kill foodborne pathogens

Could the essential oils found in cilantro help fight against foodborne illness? A body of research says yes. A 2002 study published in the International Journal of Food Microbiology tested a variety of essential oil extracts against several types of bacteria. On cilantro, the study authors wrote:

“Essential oil of cilantro was particularly effective against Listeria monocytogenes, likely due to the presence of long chain (C6–C10) alcohols and aldehydes.”

It’s a great ingredient for a cleanse

If you’re looking to do a healthy cleanse, cilantro can be a great addition. Its antioxidants and anti-inflammatory compounds are a great boost to any cleanse regimen, and it may also aid in cleansing toxic metals from the body.

Fresh, organic cilantro leaves are a wonderful ingredient to add to summer salsas, dips and salads. They are also a great flavoring for broths, and you can even add them to green smoothies. Organic ground coriander is wonderful in spice rubs for your favorite grass-fed meats and organic veggies. It is also instrumental in traditional and Indian-inspired curries.

Have you tried this delicious herb yet? What’s your favorite way to use it?