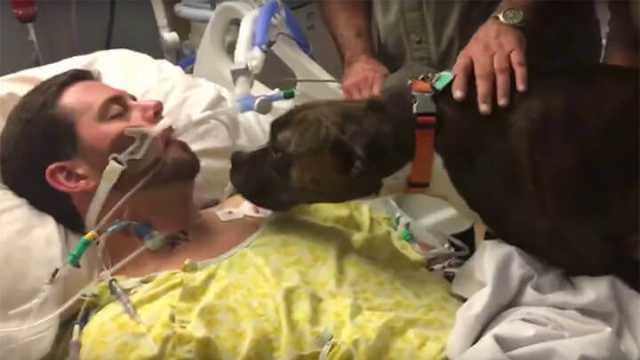 Recently, relatives of a dying man captured a touching moment on video — a dog’s heartbreaking final goodbye. Minutes before 33-year-old Ryan Jessen died, Mollie, his pet boxer, was allowed into his hospital room to spend a few moments with him.

Ryan Thomas Jessen was admitted to a hospital in California last month. Initially, he thought he had suffered a migraine. But it turned out to be a ventricular brain hemorrhage, wrote his sister, Michelle Jessen, on Facebook. The hemorrhage, which doctors think may have been brought on by high blood pressure, proved fatal.

But just before Jessen died, the family wanted to let his dog, Mollie, see him one last time. “The hospital did the sweetest thing for us and allowed us to bring my brother’s dog in to ‘say goodbye’ so she’d know why her human never came home. If you knew my brother, he really loved his sweet dog,” said Michelle Jessen on Facebook.

On Nov. 30, Michelle Jessen recorded her brother and his dog’s final moments together. The worried dog stood on the hospital bed, leaning into her owner’s face. The boxers frantic sniffing fills the room’s painful silence.

“There he is. Can you smell him?” a man gently asks the dog. “Yeah.” They then help the dog find a spot to lie down with his owner. The video has been viewed more than 18 million times and shared more than 131,000 times.

Jessen’s sister speculates that her brother’s consumption of energy drinks may have led to his untimely death. According to Jessen’s mother, her son was an organ donor. And his family is grateful to be able to help others.

Michelle Jessen said in a Facebook message that a 17-year-old boy would receive Jessen’s heart. “As sad as it is to lose Ryan, we know his heart is going to bring so much joy to the family of the recipient,” Michelle Jessen wrote. “I wish Ryan could know what a difference his heart will make for that young man.”

As for Mollie, the boxer, she has a forever home with Jessen’s family. “Don’t worry about the dog!” Michelle Jessen wrote, “We’re keeping her! She’s part of the family.”