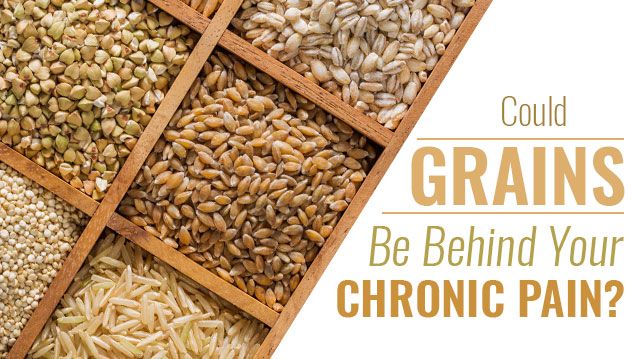 Since the advent of the agricultural revolution some 12,000 years ago, grains have increasingly become a vital food for the human race. Humans valued them due to their ease of growth, multitude of uses and long storage life. Today, grains form the backbone of the Western food pyramid, with governments, nutritionists, doctors and even the media urging you to eat as many whole grains as possible in order to stay happy and healthy.

The weight of popular consensus and government recommendations has become so great, and has taken place for so many years, that we can no longer even consider life without grains. “But how would I get my daily dose of fiber without grains?” you ask. “What would my meals be without bread to make a sandwich with, or pasta to fill my belly?” you cry. For many, life without grains seems like no life at all.

Yet no matter how many “healthy” whole grains we jam into our mouths every day, our bodies keep getting sicker and our chronic illnesses skyrocket. Why is that, I wonder?

To help you understand why grains could be causing you harm, we must first examine the organisms from which they derive: plants.

Unlike animals, plants don’t have active defense mechanisms to keep them from harm and ensure their offspring survive. Animals can move and think and evolve to overcome threats and secure their survival. Plants are passive organisms, meaning that, in general, they don’t possess the ability to move or strike out when threatened. For this reason, they rely on other mechanisms to maintain the survival of their species.

Grains are the seeds of plants and are their only means of ensuring the establishment of a next generation. Most plants rely on animals to disperse their seeds, and this presents a problem. Because grains contain the reproductive capacity of the plant, the plant needs these grains to survive in order to ensure the establishment of its offspring. In cases where animals eat grains, this means that the grain has to make it through the digestive tract of the animal fully intact so that it can begin to grow once excreted into the soil.

The mechanism by which grains survive this slimy passage through the gut is also the mechanism that is responsible for many of the chronic diseases we see in humans today.

How can grains possibly be unhealthy?

In order to discourage consumption, grains contain anti-nutrients and gluten. We’ve all heard of gluten, and many of us have adopted a gluten-free way of life after reading about the ravages this protein can wreak upon your gut and immune system.

Gluten is a compound protein that makes up most of the protein found in wheat, rye and barley. Gluten causes gut inflammation in the vast majority of the population (approximately 80 percent) and can trigger an autoimmune response in many people when the body develops antibodies to fight the intrusion of “alien” (aka gluten) proteins in the bloodstream. Gluten contains a protein called gliadin, which is very similar to certain proteins naturally found in the tissues of organs, particularly the pancreas and thyroid. As such, gliadin can cause your antibodies to unknowingly attack these organs and result in all sorts of diseases, including hypothyroidism and diabetes.

The process is amplified by the inflammatory effect of gluten, causing the cell walls of your gut to thin, resulting in “leaky gut.” A leaky gut allows bacteria and toxic proteins to enter the bloodstream and further exacerbates your compromised health at the hands of gliadin.

So, gluten equals bad. Enough said. After casting off wheat, rye and barley due to their glutenous evil, the logical next step is to turn to other, “healthier” grains. The problem is, while only certain grains contain gluten, all grains contain anti-nutrients. The most troublesome of the anti-nutrients are lectins and phytates.

Lectins are sticky proteins created specifically by plants to discourage the digestion of their seeds. These sticky proteins can lead to intestinal damage, compromised gut bacteria and leptin resistance, which is a known precursor to diabetes.

Phytates are a form of phytic acid and are a key energy source for plants. These compounds bind to important minerals such as magnesium, calcium, zinc and iron in the digestive tract and prevent your body from absorbing them. This can lead to severe nutrient deficiency problems, meaning your body is not getting the sustenance it needs to thrive.

How grains are contributing to your chronic pain

Certain animals have evolved around eating grains and can therefore process grains without coming to harm from gluten or anti-nutrients. Humans, however, have only been exposed to prolonged grain intake for a maximum of 12,000 years. Compared to the evolution of our species, which took place over millions of years, 12,000 years is not a long time, and it is certainly not long enough to have allowed our digestive systems to develop the ability to process grains and receive benefit from them.

The result is that, today, many of us suffer from chronic inflammatory conditions. These conditions are often closely associated with high grain intake and include:

In addition, growing evidence is now drawing links between grain consumption and neurological problems. For example, both autism and schizophrenia show susceptibilities to certain grain proteins that can greatly aggravate and, in some cases, cause these conditions.

If possible, limit your grain intake

The number of grain varieties is vast, and for this reason it can be difficult to cut them out of your diet. Even “healthy” grains such as quinoa contain compounds that can harm your body, so you need to be vigilant. Grain-containing foods include bread, oatmeal, cookies, muffins, doughnuts, cakes, pasta, tortillas, pita pizza, and so on. Throw it all in the bin! Even products that do not overtly seem to contain grains often contain sizeable amounts of wheat or barley, so make sure you scrutinize the ingredients of any packaged foods you buy. Soaking and sprouting certain grains may also help to remove anti-nutrients and make them more palatable.

Now that you’ve learned about the harmful effects grains can have on our bodies, try cutting out grains for 30 days and see how your health improves. We’d love to know the results!