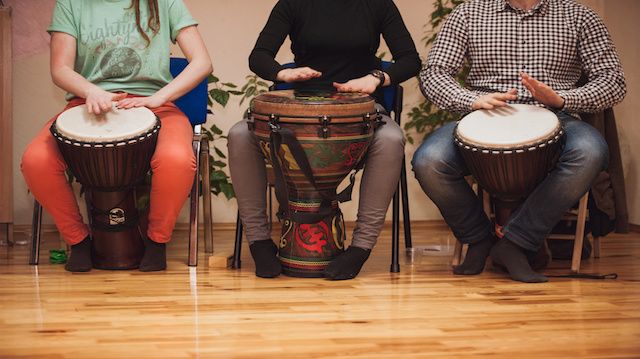 Drumming is universal. It transcends age, gender, race and nationality. It doesn’t require participants to read music or understand music theory. Even those without a background in drumming can participate in group drumming (sometimes referred to as a drumming circle). Group drumming involves any group of people gathering to drum in unison on hand drums.  The video below demonstrates a group drumming class:

The drum is an ancient tool of communication and community building. In Africa and other cultures throughout the world, prior to a major tribal decision being made, the community gathers at the center of the village to make music. Drum circles originated in the United States in the 1960s and are coordinated for all types of people to gather casually and play music together.

Alternately, they’re called a “drum jam” or “jam session,” and typical settings include beaches, parks, concert parking lots, festivals and retreats. But group drumming is more than just for social gathering. Recently a growing number of mental health organizations have begun developing community music-making interventions for those suffering from anxiety and depression.

Group drumming instead of medication

Depression is globally epidemic, affecting 350 million people of all ages, according to the World Health Organization (WHO). It’s the leading cause of disability worldwide and a major contributor to the overall burden of disease. According to WHO, more women are afflicted with depression than men, and at its worst can lead to suicide. For some, drugs such as Prozac may be effective. For those who prefer a more natural approach, group drumming may be just as effective.

Music has been recognized for its therapeutic value for almost a century, but more recently drumming — in particular drumming in groups — has grown in popularity for mental health. Researchers speculate that the inclusiveness of drumming circles, the simplicity in playing the instrument and strong steadying rhythms are the contributing factors.

Group drummers versus a control group

A new study published in the online journal PLoS One, involved a comparison between two groups: adults participating in a weekly, 90-minute group drumming session for 10 weeks  versus a control group who took part in other weekly social activities but were not actively involved in any music therapy. Additionally there was a three-month follow-up of the drumming group. Beyond that, researchers matched the two groups by age, sex, ethnicity and employment status.

Participants were already receivers of mental health services but were not taking antidepressants. Fifteen to 20 adults participated in each group drumming circle and were provided with traditional African drums. Twenty percent of the drumming session involved instruction and talking, while 80 percent involved group drumming. The drumming gradually became more complex over the course of the program.

Meanwhile, the control subjects were enrolled in social activities such as quiz nights, women’s meetings and book clubs. Each week, both treatment and control groups filled out a set of questionnaires intended to measure the participant’s level of anxiety, depression and general well-being. In addition, those participating in the drumming group provided weekly saliva samples, which allowed scientists to measure the strength of pro-inflammatory and anti-inflammatory markers.

Across the 10 weeks, significant health improvements were reported among the drumming group, but not the control group, according to researchers.

The UK study seems to validate scientifically what so many group drummers may already know firsthand: Group drumming contributes to well-being, and even goes as far as to improve anxiety and depression.

The sad truth is fewer than half of those affected in the world by depression receive helpful treatments due to lack of resources and trained health-care providers and the social stigma associated with mental disorders, according to WHO. In addition, mental health is often incorrectly diagnosed, and still others who don’t even suffer from depression are often misdiagnosed and prescribed antidepressants, says WHO. As the burden of depression and other mental-health conditions rise globally, wouldn’t it be so much simpler if doctors prescribed drums?