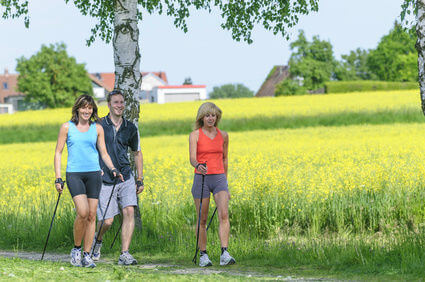 Anxiety is no fun, to put it lightly. It can sometimes last for hours, making you unable to focus on work, connect with your family and even perform simple day-to-day tasks. Luckily, nature provides several simple solutions that, if practiced regularly with dedication, may greatly ease your anxiety.

Meditation is a method that has been used since ancient times to center the mind and let go of racing, worried thoughts. It allows one to fully ease into the present moment, and when practiced regularly, it can be a powerful tool to help both prevent anxiety, and extinguish anxious thought patterns once they begin.

A study  performed at Wake Forest Baptist Medical Center sought to understand how mindfullness meditation works in the brain. Fifteen healthy volunteers were enrolled in four 20-minute mindfulness meditation classes, where they learned techniques including focusing on the breath, paying attention to bodily sensations, and observing distracting emotions and thoughts without judgment.

The volunteers reported that after each meditation session, their anxiety levels were reduced. Brain images taken of the volunteers showed activation in the anterior cingulate cortex, anterior insula and ventromedial cortex areas of their brains, which are associated with executive brain function, plus the control of worrying.

Try meditating first thing in the morning, to start your day with a clear mindset centered in the present moment, as well as right before bed, to let go of the worries and stresses of the day. If you find yourself feeling anxious throughout the day, taking just five minutes to meditate could work wonders.

There is something about breaking a sweat, especially in the fresh air, that relaxes the mind. While exercise has been shown to produce new, excitable brain cells, it also calms certain areas of the brain.

To figure out exactly how this process works, researchers at Princeton University performed a study  and got some very interesting results.

The researchers monitored the brains of two groups of adult mice for 6 weeks. One group was able to run on wheels at will, while the other group was not given this option, and instead sat in their cages. When the 6 weeks were up, the baseline nervousness of the mice was calculated.

Results showed that the mice who ran on their wheels were more willing to explore new areas, and showed less anxiety than the non-exercising mice. When the brains of the mice were analyzed, the runners showed production of more excitable neurons than the sedentary mice.

However, the brains of the runners also showed the production of neurons designed to release GABA, a neurotransmitter that works to inhibit the activity of areas of the brain that aren’t actively needed. These neurons were found in the ventral region of the hippocampus, an area of the brain involved with emotional processing.

This result explains why the running mice were less stressed – their brains were not working overtime after the exercise. To further test this theory, both groups of mice were subjected to an ice bath, an activity which causes mice a lot of stress. While both groups showed signs of stress, the runners calmed down very quickly, while the sedentary group stayed anxious for longer.

So, exercise does not provide immunity from anxiety, but based on the results of this experiment, it can certainly help the brain let go of anxiety much faster, preventing it from lingering.

The essential oil of lavender (Lavendula angusifolia) has been cherished for centuries for a wide variety of uses. These include relief of anxiety, depression, fatigue and insomnia. Lavender used in aromatherapy has been associated with deeply soothing, sedative effects.

Lavender essential oil can also be used for massage, and applied to pressure points, including the temples, to help relieve anxiety. This oil is gentle enough to apply directly to the skin (in adults), although for massaging large areas of the body, you can dilute it in organic, cold-pressed coconut oil – three parts coconut oil to one part lavender.

Be sure to choose a high quality, therapeutic-grade essential oil, as many imposters exist that contain unnatural chemical additives. This essential oil can also be taken internally to promote anxiety relief, however, for this method, be sure to check with a natural health professional to determine the right amount for you.

If you have tried the above-listed methods, and are still experiencing anxiety, it is worth it to visit a natural health professional to determine the best solutions for your individual needs and body chemistry.