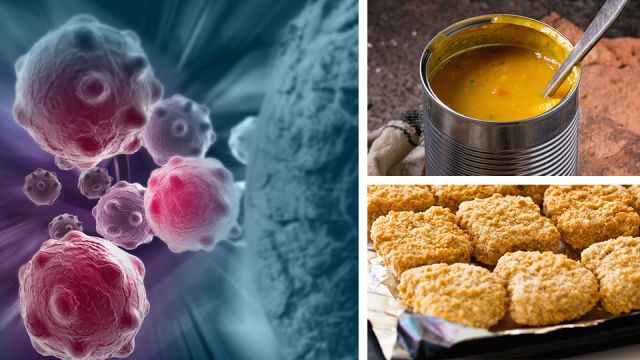 Every mom’s advice across the globe traditionally has been, “Make sure you eat your fruits and vegetables.” And now, studies are showing there may be even more of a dire need to skip the junk food and load up on good ol’ greens. A new study says eating junk food, even once in a while, may put you at risk for rapidly developing cancer.

Cancer risk is on the rise

While the world is becoming increasingly fast-paced, diets in many countries have shifted towards a significant increase in eating ultra-processed foods. Eating extremely processed food is associated with a higher overall risk of cancer. The risk of developing cancer should be on everyone’s radar. In 2017, there were an estimated 1,688,780 new cancer cases diagnosed and 600,920 cancer deaths in America.

Most people believe that eating junk food occasionally will keep your body from totally succumbing to challenging side effects. But did you know that just a 10 percent increase in the proportion of ultra-processed foods in your diet is linked to more than a 10 percent increase in your risk for cancer? Eating fatty foods is also associated with a 12 percent increase for the risk of any type of cancer and an 11 percent increased risk of breast cancer. The issue with highly processed food is these items often have a higher content of total fat, saturated fat, and added sugar and salt, accompanied with a lower fiber and vitamin density.

One of the worst parts about consuming processed foods is the fact that they contain carcinogenic elements such as acrylamide, heterocyclic amines and polycyclic aromatic hydrocarbons.

However, that’s not all: there are other hidden risks of eating highly processed food, such as the harmful packaging these foods come in. Toxic chemicals are transferred to the food directly from the packaging, and may even contain carcinogenic and endocrine-disrupting properties.

Implementing a balanced and diversified diet, while avoiding tobacco use and reducing alcohol intake, is one of the most important ways to strengthening cancer prevention. Studies show eating processed food, even sporadically, can rapidly increase cancer within the body. Kicking your junk food habit can be easier said than done, since studies show junk food can be eight times more addictive than cocaine. Read on to discover which foods will your put you directly at risk for developing cancer. You’ll be surprised by #3!

Instant noodles and soups can be extremely convenient. There is a lot of information floating around the web about the benefits of soup diets. Soup can indeed be a wonderful option for cutting calories and taking the strain off your digestive system from heavy foods, however, processed soups can do more harm than good. Consuming salt-laden soups can increase your chance of getting cancer.

Expert cancer panels have found that foods preserved by salting can increase your chance of developing stomach cancer. Frequently eating foods that are packed full of salt, such as canned soups, can damage the lining of the stomach. A damaged stomach lining drastically makes your body more vulnerable to stomach cancer. The American Institute of Cancer Research recommends keeping your daily intake of salt less than 2,400 milligrams.

Say goodbye to your quick and easy frozen chicken nuggets! Studies show people who eat more frozen processed foods are at a higher risk for cancer. Packaged and frozen foods often have high levels of the harmful chemicals BPA and the phthalate DEHP. The packaging of many processed foods are made from BPA, which is used to make polycarbonate plastics and is used in the linings of food cans. Another harmful chemical, DEHP, is found in some plastics used to make food containers and plastic wraps.

Avoid buying packaged and frozen foods as much as possible. You can reduce your exposure to chemicals by preparing food with fresh ingredients and avoiding purchasing or storing foods in plastic and cans. The study also recommends removing BPA and DEHP from food packaging to significantly decrease exposure to damaging chemicals for those who use packaged and prepared foods.

Bread is a staple of the human diet. Most people know the importance of eating whole grains versus bread made from enriched white flour, but did you know eating mass-produced packaged breads and baked goods in general can increase your risk of cancer? Mass produced packaged breads and baked goods are extremely processed and are often higher in sodium than non-processed breads.

Bread that is mass produced does more harm than good by providing excess calories and very few nutrients. Baked goods can contain trans fats, which are the fats found in shortening, margarine and many store-bought goods. A study by the Centre for Science and Environment also found that bread used in ready-to-eat burgers and pizzas contain toxic chemicals, which could possibly lead to cancer.

The diet you choose to eat is thought to be responsible for 30 to 40 percent of all cancers — but what about drinks? Sugary drinks are everywhere and an integral part of the average person’s drink selection. And, it turns out, drinking sugary drinks can directly contribute to the development of cancer cells.

The World Health Organization says that lowering sugary beverage consumption also lowers refined sugar consumption, which can curb chronic disease onset in populations. According to the American Cancer Society, the relationship between soda and cancer derives from aspartame, an artificial sweetener found in sodas. There is no doubt that soda puts you in the line of fire for becoming a cancer patient.

Researchers at the Johns Hopkins School of Medicine have found that the caramel dye in darker-colored sodas, better known as 4-Mel, is proven to cause or elevate the risk of cancer as well.

People have long believed that occasionally eating junk food isn’t detrimental to your health. However, recently released studies are showing that eating carcinogenic foods sporadically can greatly increase your chances of developing cancer. To beat the odds of forming deadly cancer cells in your body, avoid artificially sweetened drinks, pre-packaged foods, frozen foods and high-sodium canned goods. As hard as it is to steer clear of junk food, there are healthy foods that are tastier than junk food. If junk food has a tight grasp on you and you can’t stop eating tempting foods, take a look at these junk food options that are actually good for you.

If you’re especially paranoid about the risk of cancer, be sure to check out the four ways to ward off cancer. What cancerous foods have you taken steps to avoid in your diet? Leave your comments below!