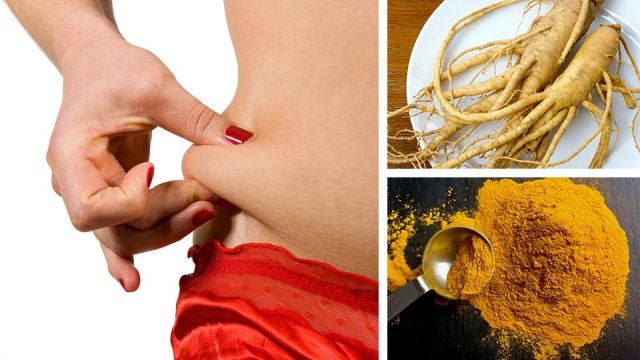 Sure, love handles sound cute. In reality, they’re really just pronounced areas of fat on a person’s midsection. If you’re sporting love handles, the first thing you’ll need to do is improve your diet. There’s no point in doing crunches if you’re eating the wrong foods. So, start by changing your diet, then add targeted exercises to your routine. Here are eight ways to help rid you of your love handles.

Before trying to exercise your love handles away, think about adding ginseng to your diet to boost fat loss first. Ginseng is well-known for increasing energy, improving cognitive performance and even preventing cancer. But it’s also great for weight loss, particularly by controlling hormones and enzymes that regulate appetite and prevent fat deposition.

A Korean animal study found that when obese, diabetic mice were given Panax ginseng extracts, they not only showed an improvement in insulin sensitivity but also lost a significant amount of weight.

Like ginseng, turmeric has many health benefits, including helping prevent the accumulation of fat. It’s also ideal for reducing fat stored in the stomach and liver. Curcumin, turmeric’s most thoroughly studied active compound, reduces the formation of fat tissue by suppressing the blood vessels that form it, according to research from Tufts University.

Although studies show that turmeric is safe at higher dosages, curcumin is shown to be poorly absorbed into the bloodstream. In fact, studies show curcumin is also poorly absorbed in the gut and intestine. Furthermore, only a trace amount is found in the blood within 15 minutes to 24 hours after administration. The reason you don’t see an increase of curcumin in the gut and blood is because the liver is actively trying to get rid of it.

But there is a way to get the most turmeric offers. By simply ingesting a small amount of black pepper — about a quarter of a teaspoon or four peppercorns — each time you take turmeric, curcumin levels in the bloodstream soar. Piperine, the active compound responsible for pepper’s pungent flavor, enhances the absorption of curcumin by a whopping 2,000 percent!

A study published in the American Journal of Clinical Nutrition found that rats who were overfed with either long-chain or medium-chain fats, gained 20 percent less weight and 23 percent less body fat. So, if you struggle with stubborn abdominal fat and love handles, which can be difficult to shed even when with the healthiest lifestyle changes, then switching to coconut oil may be key for you.

Sweet potatoes are digested slowly and keep you feeling fuller longer. Additionally, they have antioxidants that stabilize blood sugar and lower insulin resistance. This prevents calories from converting to fat. Meanwhile, they have carotenoids, which boost immunity and lower inflammation. Plus, they’re high in vitamins A, C and B6, which give you more energy to burn fat.

White tea is made from the youngest and most tender hand-picked leaf tips and buds, giving a fresh and delicate flavored — not to mention, silver-colored — brew. And, not only is white tea tasty, it also helps break down fat, suggests a new groundbreaking study published in the journal Nutrition and Metabolism.

Researchers found that white tea, known for its anti-aging benefits, can break down fat and also block the formation of fat cells. It’s actually the high levels of polyphenols that help fight fat. Polyphenols are chemicals that naturally occur in plants and may also impact gene expression.

In the study, researchers bathed human stem cells in extracts of white tea to see how it affected their development into adipocytes (cells primarily composed of adipose tissue, specialized in storing energy as fat). What researchers found was that white tea actually slowed down the growth of fat cells and helped break down existing ones. So, while drinking white tea won’t help you lose weight, per se, it can definitely help break down fat when combined with a balanced diet and exercise regime.

Did you know that switching your breakfast choice to eggs could help you lose those love handles? A study published by the International Journal of Obesity reported that dieters who ate two eggs for breakfast, five days a week, lost 65 percent more weight than dieters who consumed a carb in the morning — like a bagel.

Another study conducted by the National Center for Biotechnology Information (NCBI) found that participants who consumed eggs in the morning ended up eating fewer calories at lunch and dinner. In fact, the reduction in calorie consumption lasted for 36 hours! Besides being an excellent source of protein, eggs contain choline. Choline is a water-soluble nutrient that may help you burn fat. Additionally, eggs are packed with six grams of protein, as well as all nine essential amino acids. They’re also rich in iron, phosphorus, selenium and vitamins A, C and B12.

You’ll never rid yourself of love handles if you’re eating too many calories. One pound of fat equals 3,500 calories. So, reducing your calories by 100 per day, for one year, is equivalent to losing ten pounds of pure fat. Consider cutting 200 calories a day and you’ll lose 20 pounds in one year. Once you’ve changed your diet to include foods that will ultimately help melt away your love handles, then hit the gym and start exercising.

Better yet, add bicycle crunches. These target the obliques during your workout routine.  Lie on your back and extend one leg while bringing the opposite knee toward your chest. With your hands behind your head, touch your opposite elbow to the bent knee. Now twist your body and touch the other elbow to your other knee. Before you know it, your love handles will be a distant memory.