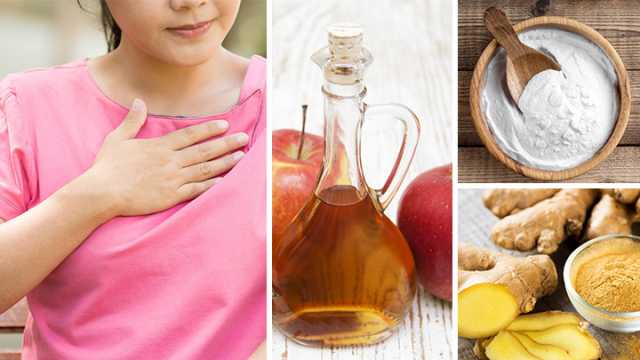 In this post, I’ll explore some of the most effective natural home remedies for acid reflux. These remedies should provide you with instant relief from heartburn, without the unwanted side effects that often come hand in hand with conventional reflux treatments. But first, let’s wrap our heads around what acid reflux really is, and why it strikes in the first place.

What is acid reflux?

Acid reflux, otherwise known as heartburn, is actually fairly self-explanatory: the acidic digestive fluids in your stomach essentially move in the wrong direction, back up your esophagus.

Because your esophagus isn’t designed to accommodate the low pH of this digestive fluid, you’ll feel burning sensation in your chest and throat. That burning sensation is literally your stomach acid corroding the lying of your esophagus — not the most ideal situation! When I had my once-weekly acid reflux “hit,” I could totally see why it’s commonly referred to as heartburn.

It seems logical to assume that acidic foods are the underlying cause of acid reflux. In reality however, it’s actually the opposite which is a leading cause of heartburn. With decreasing acidity in the stomach, your gastrointestinal tract is less able to efficiently digest the foods you eat. This means that those foods begin to build up in your stomach and intestines, essentially creating a blockage that can send your acidic digestive juices rocketing back up your throat and creating all kinds of issues.

Clearly, this isn’t meant to happen. That stomach acid is only heading up in the wrong direction because something called your lower esophageal sphincter (LES) is malfunctioning. Under normal conditions, this sphincter acts as a sort of one-way trapdoor, letting food pass through but preventing digestive acids from rising up into your throat. When exposed to a poor diet and high levels of stress, however, this all-important trapdoor weakens and allows those corrosive digestive juices to move upwards and start creating that burning sensation.

A classic example of this is simply eating foods too quickly. When you shovel your meals down too fast, the stomach gets overloaded and can’t keep on top of the digestion game. Those foods sit in your stomach and start to off-gas, causing you to let out an almighty belch. Studies show that in almost 75 percent of cases, this belching was the major precursor to acid reflux — presumably because it opened the LES and allowed those digestive juices to escape into the esophagus.

Other causes of acid reflux include chronic stress, poor gut health, eating overly large meals rather than more smaller meals, obesity, pregnancy and smoking. In addition, as I found when I cleaned up my diet and switched to a paleo diet, processed foods that are high in sugar, table salt, refined oils and artificial ingredients can also contribute to heartburn.

Aside from cleaning up your diet and easing back on meals, there’s plenty of effective natural remedies for treating acid reflux. Here are just a few.

Here’s an acid reflux treatment that I’ve tried myself, and I can personally attest to its effectiveness. Baking soda is an alkaline substance, meaning it’s the yin to acid’s yang. Whereas stomach acid has a pH of anywhere between 1.5 and 3.5, the pH of baking soda hovers around 9.

Now, while this won’t solve the root cause of your heartburn problem, it will immediately soothe the symptoms of that heartburn. Similar to what you see on those fancy schmancy antacid ads on TV, swallowing a mixture of baking soda and water elevates the pH in your esophagus, which instantaneously alleviates the burning sensation.

Here’s a quick and easy recipe for using baking soda for acid reflux. Mix a teaspoon of baking soda in a large glass of water. Sip slowly on the mixture until your heartburn recedes.

Simple as that! It’s amazing how such a commonplace, cheap remedy can be just as effective as the most cutting-edge antacids. And not only that, there’s no side effects… the same can’t be said for those antacids.

Sometimes, the best remedy is sitting right under our noses. I’ve done loads of research into the dynamics of drinking water, and discovered that most of the stuff out there, including both tap water and cheap bottled water, is actually quite acidic. This acidity, in addition to corroding your teeth and bones, will almost certainly exacerbate your acid reflux symptoms.

The solution? Get your hands on some good quality spring water, or a high-quality alkalizing water filter. You want your water to be within the range of pH 7-10, and drinking plenty of this alkalizing water will help to soothe your inflamed esophagus.

Ginger has long been used as an effective treatment for a wide range of gastrointestinal upset, including gas, bloating and of course acid reflux. Sipping on a hot cup of fresh ginger tea can help to calm a chaotic digestive system and soothe the symptoms of heartburn. Here’s what to do:

Cut an inch of ginger off a whole ginger root. Slice this piece into smaller sections — the smaller the better, as they’ll infuse the tea with greater efficiency when cut into smaller chunks. Put the ginger slices in a cup, then pour in boiling water. Cover the cup with a saucer or something flat to allow the ginger to steep for five to 10 minutes, then sip to your heart’s content!

It seems highly counterintuitive that drinking more acid would actually help your symptoms of heartburn, and in the case of acidic tap water or bottled water this is certainly true. But strategically elevating the acid levels in your gastric juices before meals, on the other hand, can help to prevent the development of acid reflux in the first place.

Simply pour a tablespoon of raw apple cider vinegar into a glass, then top up with water. Drink this solution 15 to 30 minutes before meals to aid your digestive juices, and you should see an improvement or discontinuation of your acid reflux problems.